The Place We Left Behind I don't know quite how this one got by me, but Kahn & Selesnick's SCOTLANDFUTUREBOG was published by Aperture Foundation (the outfit that was originated by Minor White), in 2002. It's an instance not just of innovative photographic "documentation" but of creative book design. Measuring 9"x17 3/4" it's dimensioned to accommodate the wide-angle images. What is it? Well, interesting question. It appears to be a series of photographs taken either on the coast of Scotland (as implied) or along the shore of some other fairly barren, wet clime (they don't specify where). There's a brief ten paragraph text--presumably written by the photographers, setting out the parameters of their thoughts:  The world they're presenting is "post-Apocalyptic"--the remnants ("Bogdwellers") of a comet-devastated earth, eking out a marginal existence in remote Northern Europe.
The treatment is post-Modern, in the way that bizarrely posed mise-en-scenes are presented in stark contrast to any exterior references, almost as ceremonial templates. We're used to thinking of "pre-historical" antecedents imagined as archeological reconstructions, with scattered tool implements and burial mounds and other material disjecta consolidated and catalogued for interpretation. This referent is underscored in the faux remnant collection pictured on the endpapers shown below. In this instance, photographic documentation is posed as the alternative "record"--an imagined pageantry--almost as if an improbable possible future is being looked as if it were "the past". This creates a weird dislocation: Ceremonial events and postures have a peculiar unexplained resonance, much the way New World native societies and behaviors must have seemed to early European explorers of the 15th and 16th Centuries.

The striking half-title page, with the 39 letter sequence--which I can't reproduce because 20 of the letters are printed backwards--the contrary sequence being
S C H O T T E N S U M P F K U N F T I G
which is German (I believe) for ScotlandFutureBog. In the text accompanying the installation and exhibition to which this book is a catalogue (Transmissions from the Schottensumpfkunftig), there is this:  "Transmissions stretches credulity to its limits by positing a future society of non-literate bog dwellers, which is known to us only through photographic documents and artifacts that have somehow been sent back through time. Bogseers, Woolcarriers, and Snailpaceshepherds inhabit this world of Undrworlddoors and Timewindowsinkholes." That exhibit also included some sculptural installations which are not part of this book. 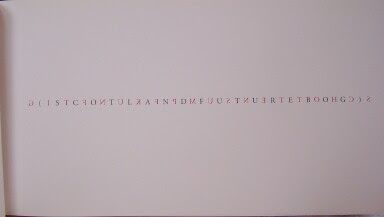 These photographs, which were probably made with either wide angle lenses or were cropped as "banquet" formats, are all black and white. In addition several of them are presented as layered overlays printed on milky "drafting film paper" which permits super-wide spreadsheets which suggest--though without actually being--superimpositional templates. 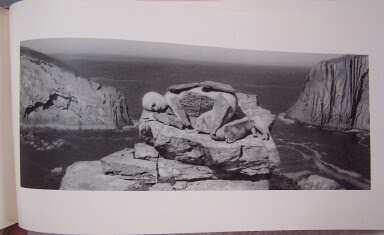 The various images are somewhat tongue-in-cheek--half humorous evocations of a world the artists dreamed up. To me, they also suggest Ingmar Bergman's Seventh Seal--the same grey, mordant visuals, the grim deprivations and depressed outlook of the Europe of the Plagues, religious intolerance, violence and superstition. The cautionary fantasy of what would happen to "civilization" if our complex interlinking of technology and social networks were suddenly removed. Not a new idea, to be sure, but a visual entertainment with all kinds of echoes and asides about how we think of peoples separated from us in time and circumstance. Ironic, because this is, in a sense, a version of where we came from, just as it might be the place to which, as a species, we return.
Posted by Curtis Faville at 10:08 AM