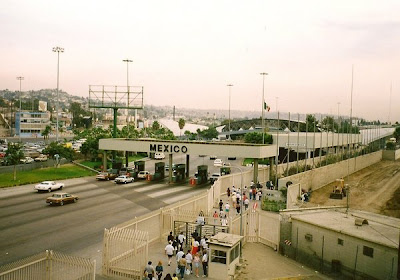 There have been increasingly worrisome reports over the last two years about the troubles in Mexico involving the growing power and violence of the Mexican Drug Cartels. Since the Mexican President announced a national policy of all-out assault against the "drug lords", open warfare has in effect broken out in towns and cities throughout the country. Officials on this side of the border believe that this new level of violence may well spill over into our border states.

With respect to America's foreign policy with Mexico, we are presented with a number of huge dilemmas. Mexico is a major trading partner. We share a long, porous border with it. The demand for drugs and the attraction of human smuggling and illegal human influx is overwhelming.
Mexico's political history is not a shining example. Government at all levels is riddled with corruption. Much of the country remains poor, and its class divisions resemble the Third World's. Mexico has often used the threat of increased depredation to blackmail the U.S. for foreign aid.
During much of the 20th Century, American agriculture in the Southwest benefited from the cheap seasonal labor provided by Mexican farm workers. The number of such migrant laborers never was statistically significant. But all that changed over the last 30 years.
Experts estimate that there are somewhere in the neighborhood of 25 million illegal Mexican immigrants presently living in the U.S. The vast majority--and by that I mean at least 95%--of all illegal Mexican immigrants don't sneak into the U.S. to do farm labor; they come for all the usual reasons people flee deadbeat Third World economies:  Looking for a better life, better employment opportunities, better education, better health care, better housing, public order--in short, prosperity.
The government of Mexico has done essentially nothing to discourage this trend, using it as a pressure valve to vent social discontent. And now it appears that even if Mexico truly wanted to control the illegal Drug Cartels, it may no longer be in a position to do so.
Acting out of self-interest, the United States should consider the following:
1) Legalize drugs. Studies have shown that the actual cost of controlling the illegal drug trade is many times greater than addressing the crime and health problems arising from voluntary use. The moral issues inhibiting legalization are not persuasive: Which would you rather have, a few hundred thousand sad addicts, or mafia-style networks promoting crime throughout your infrastructure?
2) Drastically curtail all immigration, both legal and illegal. The pressure to emigrate from all over the world into the U.S. is intense. But the era of "give me your huddled masses" is over. America is no longer an "empty" country in need of population. Our prosperity, which was built on the exploitation of resource, and the factory system, appears to be rapidly ending. The real standard of living--subtracting excess credit, multiple worker households, and the steep increases in the lower classes--has been steadily declining over the last quarter century. We can no longer "afford" to take on the burden of excess refugees from South America, Asia, Africa. Every wave of additional human growth lessens our ability to deal effectively with the demands this puts on our society. The current fiscal crisis is symptomatic of America's long-term economic decline; it is now clear, in retrospect, that this crisis had been camouflaged by runaway credit. Americans were fooled, and wanted to be fooled. Not only are we no longer a rich enough country to afford to save the rest of the world from its problems of overpopulation and hunger and violence, we may not be able to save ourselves.
We cannot dictate to Mexico--it's a sovereign nation. We are still a world of nations, despite the desire to conceive of our interests as "global" or "universal". If Mexico will not, or cannot, manage itself in such a way that our own interests are respected, we have no choice but to act to protect ourselves. If this means trashing NAFTA, closing our borders, and deporting millions of scofflaws, then we need to do that.
In the long run, this is a superior choice to throwing up our hands and moaning about impossible choices. If we don't preserve our way of life and the prosperity we still in some measure enjoy, we'll end up being just another chaotic confederacy, like Russia.
Mexico may never be able to put its house in order. But that's their problem, not ours. In the meantime, we have more than enough on our own plate to deal with.
Posted by Curtis Faville at 7:04 AM

Curtis, you voted for the Democrats. Don't you think they don't have the nerve to deal with this issue?

It's one more reason that I think you have to change your mind and vote Republican.

Voting for Democrats is just voting for the chaos on the border to get worse.

I wish that those who so easily encourage the "legalization of drugs" would give equal discussion to ideas concerning the consequent importation, manufacture, distribution, and sale of those drugs. The idea of the tobacco industry taking on legal marijuana has given me the jimjams for quite a number of years now, and who can imagine how you'd go about dealing or dealing with the harder drugs?

let there be a thousand nations
as christopher alexander as argued
(A Pattern Language, 11-14)

those founding fathers had it right
a nation of states,
each state itself a nation

but, taking root,
develop slowly their own culture
flexible, organic, but rooted

Charles: I don't do so "easily"--for a long time I bought into the strategy that we could/should/had to attempt to stamp out addiction by beating back the onslaught of the illegal drug subculture, resisting the criminals at the gate by whatever means necessary.

But addiction is a quite human practice. In primitive societies, people use all kinds of substances--stimulants, soporifics, pain-killers, hallucinogens, and their societies don't fall apart into chaos. We might question the character of their behavior, but that's a deeper moral issue, not a medical or criminal one.

The fact is that illegal drugs are merely a means to an end: Money. Take away the financial attraction of the black market for drugs, and the criminal element simply melts away. There would still be the modern equivalent of "opium dens" but we'd have no more of this gun culture and turf wars, extensive smuggling networks, and the huge bribes of cash and influence which plague us today.

As a teenager, I never tried anything, because my parents put the fear of god into me. They were both chain-smoking two-pack-a-day smokers of unfiltered Camels: I could see first-hand the evils of addiction, and had no desire to follow them down that pathway.

Studies have shown that people with normal expectations and motivations aren't likely to choose addiction, especially if there is no "naughty" culture to support it. Getting "down" or "up" all the time is really a drag. Alcohol offers a good example: Perhaps 5% of the population is likely to become "alcoholics" but people don't kill each other to control it and market it, as they did during Prohibition. I'd argue that, on balance, it probably does much more good than bad. The same is probably true of marijuana, though I've never smoked the stuff--once was enough.

I don't idly recommend legalization, but what are the alternatives? We've tried the other way, without success.

Nations may be the problem but nations are what we have.

If we can't--in fact, have no right to--control what happens outside our borders, then our first responsibility is to control what we do have the right to. That's pretty much how things got solved in this country once upon a time. We didn't take honest responsibility for the rest of the world. We gave some foreign aid, and did a lot of irresponsible mischief meddling in others' affairs. That doesn't work. We end up supporting dictators. Is there a third way?

Not that I see for many more years to come. Let's try to save ourselves first, then maybe we can put the oxygen mask on the person sitting next to us.

Love and charity and care and order begin at home. Given our budgetary problems at present, I think it unlikely we'll even be in a position to have much of a positive effect on the rest of the world. I'd rather have a closed, orderly, prosperous society, than a chaotic, poor, destructive "open" one any day.

I saw you on Ron's blog

I agree with you, basically.

You mean here, or on Ron's site?

where they control the price of a six-pack and have just raised the price of the brand (Buddha Beer)
I buy from $5.95 to $7.95

things are now at the point of

"every-man" for himself
and his immediate family/circle...

or at best The Tribe!

let's murder and rape the Mohicans and take their
land then take Manhattan! Then...
take Berlin!
w can "take" on credit...
and NEVER haave to pay-the-bill

now, to check CNN or CNBC or the stock channel to see how my REAL-uh-state fund is doing...

they own the County Lick-her stores here.

hey, after "they" legalize drugs will they legalize prostitution?

Legalizing dope and prostitution would also gain the Feds a lot more tax money, which could be used to put even more dopey ideas into action, AND create jobs, which in turn would be paid for by the tax dollars -- !.

But do it legally, and with the blessing of the Audacity of Hope's author, Mr. Cheese Curls himself.

Actually legalizing dope and prostitution would save a lot of tax dollars, and reduce the size of government.