My Lunch With M.F.K. Fisher 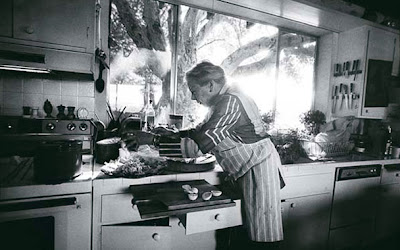 Growing up in the Napa Valley, where our family had moved in 1954, after brief periods of residence in Richmond and Oakland, was in many ways a condition of cultural isolation. The Valley had been first settled in the early 19th Century, primarily as an agricultural economy, eventually with a heavy emphasis on grape growing for the production of wine. During Prohibition, that business was depressed. By the early 1950's, when we first began to explore it, the Valley had become a bit seedy: There were three major industries where people worked: Mare Island, the Naval Shipyard which thrived in the War Years, and for several decades later before being finally decommissioned in 1996; Basalt Rock & Gravel, just south of the town of Napa; and the wine industry. Despite its proximity to San Francisco, it did not begin to grow until after the War.

What an encounter! I'm jealous. Fisher was a fine writer; I've been putting off really diving in, but have been gleefully thumbing around in her books for the last couple of years.

Andy, the best book to start with would be An Alphabet for Gourmets, which is divided into separate sections, which may be read in any order.

Most of her books contain interesting anecdotes from her life, but she never set down an organized autobiography. The Letters is fascinating, sort of like the curtain drawn back as in The Wizard of Oz. She created a partly fictionalized persona for her work, more charming and flexible than her true self.

I've always liked Douglas Bauer's piece about spending time in New Orleans with Fisher and looking for the perfect gin fizz. I think it's in Death by Pad Thai, though I've also heard him read it--very well--aloud.

I don't know the Bauer piece--is it online?

Thanks for reading--a privilege to be read by you.

No, I don't think it's available online, but Death by Pad Thai is relatively easy to find.

I looked it up, and Bauer's essay is actually the introduction to the book, though I remember his piece as simply being the best thing in it.

I am writing a book about M.F.K. Fisher but never had the chance to meet her. Your words are lovely and so personal. Thanks for sharing.