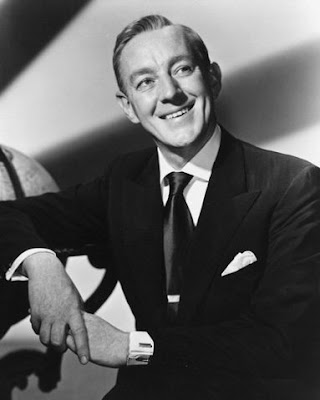 In the British Isles, there has been a long tradition of legitimate stage acting, which is unrivaled throughout the world. When cinema developed momentum in the 1920's--and with the arrival of the Talkies in 1927--film began to rival the stage as a venue for acting talent. The two media may have seemed quite different modes in those early days, but eventually their qualities became better defined, and their distinctions clearer. Sound is thought to have "ruined" the careers of certain actors, whose voices didn't match their silent acting abilities. "Old fashioned" acting methods--common to stage acting up to this point--were thrown into sharp relief by cinema. The degree to which the cinema actually changed the legitimate stage--particularly acting technique--is a story for another time. My point here is to suggest that certain actors/actresses were able to bridge the gulf between stage and film, to have, in effect, dual careers. This has become very much the exception since the Second World War, with film actors/actresses rarely maintaining separate skills (live and recorded).

It's still true, however, that training in the legitimate stage probably is more effective in producing skilled actors, than starting out exclusively in film. Many actors find film acting to be difficult for one reason or another, though the demands for prolonged performance are rarely as great as they are in major stage roles. (It seems possible to construct a major career as a film actor, without ever having to develop any significant skills for real acting.) On the other hand, a legitimate actor may consider his talent squandered in film. The money, of course, in film, plays a large part in seducing serious acting talent away from the stage. In the case of Marlon Brando, for instance, a great acting career on the stage appeared to have been derailed when he moved over exclusively to movie roles.
The audience for theatre is quite limited when compared to that of film. Who would want the greatest acting talents confined to the theatre, when a great universal medium like film is available?
The career of Alec Guinness presents the ideal of an actor whose legitimate stage career led directly to his success as a screen actor, but nevertheless didn't cause him to abandon the stage altogether. Such dual careers are of course more common in the British Isles than here. Laurence Olivier comes to mind, but there are countless others. Guinness's apprenticeship as a classically trained actor enabled him to express his talent in countless guises. Professionally modest, even meek, about his abilities, he was routinely able to place himself inside a vast array of strikingly diverse roles, both comic and heroic.
Beginning with Great Expectations (1946), he did a string of film roles that is unrivaled by any other talent:
Oliver Twist 1948
Kind Hearts and  Coronets 1949
Last Holiday 1950
The Lavender Hill Mob 1951
The Man in the White Suit 1951
The Card 1952
The Captain's Paradise 1953
To Paris with Love 1955
The Ladykillers 1955
The Bridge on the River Kwai 1957
The Horse's Mouth 1958
Our Man in Havana 1959
Tunes of Glory 1960
H.M.S. Defiant 1962
Lawrence of Arabia 1962
--and these are only the highspots! In the space of only 15 years, he established himself as the major male acting talent of the post-War era. It is sometimes said that great acting careers are the result of shrewd part selection, that failed careers are often the result of actors "selling out" for pop roles, avoiding challenges and cashing in on a single success. This is certainly true in America, where an early plum role may lead to a string of howlers, as with Nicolas Cage, for instance, whose major performance in Moonstruck (1987) was cashed in for two dozen macho-action flicks. Why does one career go awry in this way, while another, say, like Kevin Spacey's, or Jeff Bridges', continues from one pinnacle to another? It probably has something to do with a proclivity for taking chances; but it's also the result of challenging oneself to higher standards of performance. Without a solidly grounded preparation of training, many American acting talents dither in the wind, reluctant to forego easy exploitation movies (and the easy money), in favor of more interesting parts that might relegate them to mere "character actor" status.
In Guinness's case, the tendency to take diverse roles seems to have worked to his advantage. Long before Dustin Hoffman and Robin Williams essayed cross-dressing parts, Guinness was playing eight separate parts in the same movie [Kind Hearts and Coronets], one of which was a woman! It's difficult to imagine any Hollywood actor or actress trying anything half that ambitious today, both because of the difficulty of execution, and of the risk it would entail to "image" and "market continuity."
The studio system in Hollywood tended to typecast actors, and though that system is quite gone now, the vestiges of that approach to role choices remain in place. Actors still tend to measure the desirability of a part in relation to what they believe the "target audience" may expect. But looking at the successful career of Guinness, "image" and "expectation" probably played little or no part in the roles he chose. He was a professional actor; each role required that he exercise his ingenuity and guile to adapt himself to its specific demands. It wasn't about preserving his reputation, but about making good theatre (or good film).
It is often remarked about Guinness that he was a humble man, self-effacing, quietly devoted to personal obligations--his marriage, the church, his interests--who always strove to maintain a business-like, courteous approach to his craft. It's unlikely we shall ever see his like again. A modest man, without vanity or confusion, who possessed a great talent which he used to bring entertainment to millions. It's not a little thing.
Posted by Curtis Faville at 9:36 AM

So ... you're saying that actors, like poets, don't have to be jerks? What a concept!

About Guinness your absolutely right—and Spacey and Bridges, too. Is it possible that one is corrupted by living up (or down) to the clichés of one's profession?

It's a pleasure, by the way, to be tracking your blog. I found it because of your excellent comments on Abramson's blog regarding Derek Walcott....

out the door
on the way to video rental
store

(though I got a VHS tape (or is it BETA) of it) somewhere
to get Kind Hearts..

then pick-up a bag of chips and a 12elve

-pack of Guinness Stout
and

(maybe) call "what's Her name" to come over
...which I doubt she's into
"Trickery and Noise Flicks"

Laughton "up there" also...

thanks for paying attention...and remembering the black and white 'stuff'

back to them "Brits":


also just watched (for the second time in my 68 years)

THEN there is Noel Coward..!!!