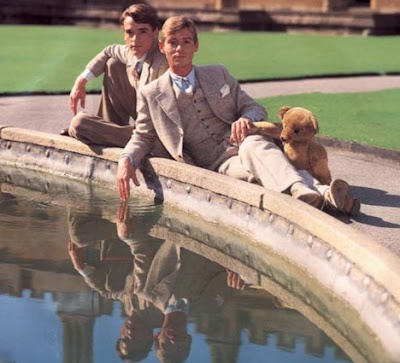 Brideshead Revisited was adapted by the BBC as a television miniseries and released in 1981. It premiered on American PBS, and was an immediate hit, reprised several times, once with William F. Buckley (himself a Catholic) moderating episodes, once even inviting the critic Hugh Kenner to briefly discuss the implications of the plot.

I was not raised Catholic. My parents forced me to attend Presbyterian for a few years as a boy (while they never went to church at all), but it never made much sense to me, and I learned practically nothing in Bible school. My first year in college, I had a Catholic roommate, but we never discussed religion, and he was soon to become "lapsed" himself.
Therefore, a lot of the deeper emotional and philosophical issues which Waugh weaves into the drama are lost on me, or at least I don't feel them with anything like the intensity I suppose Catholics may experience.
Waugh himself was a converted Catholic. It's a cliche that many of the most devout and committed members of any religious sect are converts. In Waugh's case, it seems to have been both an intellectual and personal persuasion, reflecting both a need to see life as part of a larger given structure, and a character "weakness" which expressed itself in a somewhat "dissolute" youth.
The novel, published originally in 1945, has a nostalgic cast. It looks with some wistfulness back at the central character's romantic university years at Oxford, his later wandering years as a professional landscape painter, resigned to a dreary present circumstance as an officer in wartime Britain. The novel attempts to show how Charles Ryder's three failed loves--with Sebastian Flyte (a titled Lord), his college buddy; Celia, his stuffy wife; and Julia Flyte (Mottram), Sebastian's married sister--lead him to a reconciliation with his faith in larger purposes.
Waugh unashamedly celebrates the upper classes, their privileged lives, their freedom, their indulgence, which is contrasted to the moral strictures of the church, the codes of behavior against which the Brideshead family measures itself. There's a lot of hypocrisy of various kinds, but none of that seems to alter Waugh's essential attitude:  No matter who you are, what kind of life you live, you can't escape the judgment of your own conscience, and the consequences of your wicked behavior. Not having been raised a Catholic, as I say, I was not very familiar with the concept of institutionalized guilt. Particularly, the notion that no matter how evil, how naughty one might be, there was always some expiation, some forgiveness, available, an ultimate salvation from mortal sin.
As a piece of cinema, this production is almost without equal as an episodic panorama. Presented as a dozen hour-long episodes, it gives a vivid picture of a certain segment of British upper-class life over a 20 year period.
Brideshead had never been dramatized before. The production (of 1981) was competent in all respects. Jeremy Irons played Charles Ryder, Anthony Andrews (most familiar to American audiences as the star of the BBC's Danger UXB, and a major part in Huston's Under the Volcano [1984]) played the difficult part of Sebastian, Diana Quick was Julia--with other major parts for Claire Bloom, John Gielgud, Jeremy Sindon, John Grillo, Charles Keating, Laurence Olivier, Stephane Audran, and Jane Asher. For American audiences, its picture of life in English country estate houses may be familiar from detective fiction, or Wodehouse comedies, but the class and sexual tensions are probably somewhat exotic.
We have no specific  counterpart to British public prep schools, with their rituals of punishment and dog-pack pecking-orders, sado-masochistic homo-erotic routines. Upper-middle class Americans predictably fantasize about the trappings of titled entitlement, and the Ivory-Merchant period pieces have depended as much as anything on this obsessive New World preoccupation with Old World privilege.
Nevertheless, I must confess to having been smitten with this effete, rarified vision of English sophistication, its wool suits, its brisk contemptuous wit, its breezy presumption and limp-wristed decadence. Sebastian's Teddy-bear may be the ultimate fetish of irresponsible leisure, but what American school-child hasn't been captivated by A.A. Milne's Winnie-the-Pooh and the cosseted world-view it portrays?
If Charles and Sebastian are insufficiently heroic in their rebellion against the staid conservatism of late Edwardian mores and prejudice, the qualities they do exude certainly offer a refreshing contrast to the bumptious athleticism of Studs Lonigan or James Cagney.
As the sun set on the British Empire, her chosen sons graciously sank into irresistible decay and excess. To Waugh, the only moral salvation available became the Church of Rome, a symbol of Medieval order in a world of crumbling honor and good taste. The nostalgic innocence he reveres in this novel is identified with the purified duty and devotion of faith. As in Forster, the greatest tragedy is in growing old. Empires rise and fall, and proud young men either die or slip into drunkenness and dissolution.
Posted by Curtis Faville at 9:59 AM

"ain't it the truth?" Burt Lazar, The Cowardly Lion

which brings me to well that kid who just killed 5 soldiers...

maybe this will wake up the fucking military morons!
I doubt it.

a real dissolution and futility

Yeah, those brave young boys in valor and courage--lots of 'em come home shaking and frazzled from PTSD--

then there are the war wounds, paraplegics--

or the body bags.