The Archetype of Decadence - on a Photograph of Clarence John Laughlin 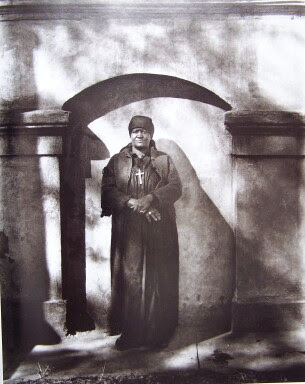 At first glance, it appears to be a straightforward formal outdoor portrait of a late middle-aged African-American woman in a long dark dress or robe, with a large Xtian cross around her neck, standing in front of a formal architectural feature, a blind archway straddled by two decorative pediments. All of the information necessary to an understanding of the photographer's intention(s) is here, in black and white; we don't need to know the exact color of any part of the composition to understand the dialectic being offered.

The light is a few degrees from apex, perhaps it's 10:30 AM or 1:45 PM, it doesn't really matter. The shadow that is created by the archway and pediment is the real point of the light's angle. The shadow formed makes a large dark sickle which looms over the woman's head. The symbolism is perfectly obvious:  Death (the sickle) is poised over her. Will her cross protect her from the risk of mortality?
Light and shadow (dark) are opposite poles in the dilemma of religious struggle. We don't have to know--as it happens--that "Mother" Brown was the leader of a religious cult in New Orleans which included Voodoo among its tenets. We don't need to know what kind of a building it is she's posed before. She stands in a dignified posture, secure in her beliefs, confident and convinced. Does the light reveal truths about her plight, or is this just the ironic accident of the angles and positions of the solar system and rays of the visible spectrum falling on pieces of shaped stone or stucco?
The Gulf South--in particular New Orleans and the surrounding Delta Country--is subject to continuous melting decay, brought on by water and intense tropical heat. Bodies buried in the ground literally "float upwards" to the surface over time, hence burial practice dictates that bodies be placed in vaults instead of in the earth. In the context of Post-Bellum Southern decay and decadence, superstition is often associated with fetish-objects. In a critical statement by Laughlin, he says "the physical object, to me, is merely a stepping-stone to an inner world where the object, with the help of subconscious drives and focused perceptioins, becomes transmuted into a symbol whose life is beyond the life of the objcts we know and whose meaning is a truly human meaning."
In this photograph, the cross--fixed symbol of Xtian dogma throughout history, worn by acolytes and followers as a talisman of their faith, or as a charm to ward off "evil"--is contrasted with a mythical symbol of mortality. But the contrast doesn't imply struggle. The diagonal lines of shadow throw the scene into vivid relief. Her body, surrounded by symbolic shadows, masquerades as subject, a hostage to art.
Is Laughlin telling us something else about life and death, belief and delusion?
Posted by Curtis Faville at 9:01 AM

I dunno if Laughlin is "telling us something."

But this photo, as with many, many of his, does speak, though without words.

I think you -- or anyone with a sympathetic eye and the ability to translate reverie into words -- could do at least 50 posts or essays on Laughlin, each looking at a single photo.

at least 3 'things' (connects) for me come....simultaneously:

and as I recall Hurston's got it "down pat"

whoever took this pic-ture got a fine eye/

I cld say more... but am out on a limb, here, especially about that huge cross she bears...

a paper (new) copy of that Rexroth book on the way....

I tried a bit of the on line version...lasted about 22 seconds...

Otherwise it's rather stolid & rectilinear, however iconic.

In death's grip life crawls out might be a definition for decadence.

I gave a book of his photos to my dad once. Somehow he just misses being heavy handed.

There are people who actually make their living doing that.

I don't know--is it immoral?

My concluding line was just an invitation to readers/visitors to make up their own interpretation.