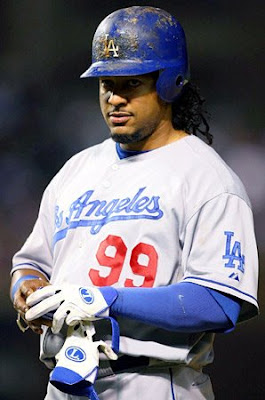 Let me be clear:  I've never been a Dodger fan. I was raised in the San Francisco Bay Area. When the Giants moved west in 1958, I watched them play that year at Seals Stadium, the little minor league park they used while Candlestick Park was being built.

When the Dodgers moved west to Los Angeles in the same year, a natural rivalry sprang up. Anyone who loved the Giants just naturally hated the Dodgers, and vice versa. In the annals of fandom, the more your team beats the enemy, the better you feel about it. It's part of the fun.
This year the Dodgers started like a fire-engine, all sirens blaring, winning 13 games in a row at home, a record. They led the NL West by 6 1/2 games, and looked to be favorites as World Series contenders. Leading the charge was Ramirez. Signed last year by LA, and re-signed for 2009, he was on a torrid pace, batting .348 with 6 homers, and 20 RBI's, many of his hits coming in the clutch. Yesterday, MLB announced that Ramirez had failed a drug test, and tested positive for performance-enhancing substances. No one, not even Ramirez, seems to deny that he'd been caught red-handed. You don't have to be discovered with the needle in your butt to prove that you're juicing.
Because the Giants are in the NL West, I've never followed the American League closely. Ramirez was just a rumor to me, until he came to play for the Dodgers. The guy isn't an appealing role-model:  He sports long dread-locks, and generally looks a little grungy, which seems to be his preferred mode. Apparently he's been considered a selfish player, even a trouble-maker, in the past. Big stats and big salaries seem to have something to do with that. I can't work up much sympathy for a fellow who, with natural skills and superior ability, and already making a mountain of money, thinks he has to cheat to get a little more edge. Bust his ass!
But the best news is that he won't help the Dodgers, a rich franchise which traditionally has had the luxury to hire expensive free agents over the years to pump up their lineups. He's been suspended for 50 games, right in the heart of the season. Is anyone sorry for the Dodgers? Maybe their fans.
But not me. The Giants, who demurred to pay Manny the astronomical salary he was demanding, now can only thank their stars they let him get away. Manny may only have been using the Giants offer as leverage, anyway, to squeeze more cash out of LA.
This is the best Bay Area sports news since Tim Lincecum won the Cy Young last year. Now we might have an even chance to unseat those pesky Southern California rivals!
Go Giants!
Posted by Curtis Faville at 6:31 AM

Oh dear, Curtis, I can't follow you here. I haven't followed Manny, either, since he joined the Dodgers. As a Red Sox fan though I have to admit to a fondness for the lad. His work on the Sox was always a fine thing to watch -- his fellowship with Big Papi, who's been in the doldrums since Manny left; his antics; his sparking of the entire team. He always seemed to me a Derek Jeter without the pin-stripes and Noo Yawk business cool. I'm sorry Manny yielded to temptation; I don't really understand it. The temptations and stresses of that job must be godawful.

he IS a role model? I bleed for him..

and the rest of "professional" sports

give me Jimmy Pearsol any day! or Mickey Vernon!

I remember seeing The Mickey hobbeling out to center field at Griffith Stadium wearing braces on both knees!

why not just make steer-roids legal? and let the buyer be aware?

who really gives a shit... about the players or the "drugs"...


anyway, don't get me started...ouch! that needle stings...

hey just in my very first ebook! and a print version available