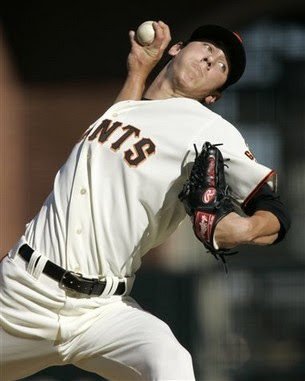 Tim Lincecum's star has risen as fast as any major league prospect in recent memory. Acquired by the San Francisco Giants in the first round of the 2006 Amateur Draft, after having been drafted twice before by major league teams (before he was ready to become professional)-- from the start, his potential and promise has signified greatness all the way.

His high school, college, and brief minor league careers were all marked by precocious dominance, and that promise was fulfilled when he won the Cy Young in only his second year in the bigs, posting an 18-5 record (which could have been even better, had his team given him more runs in a few games), with 265 strike-outs.
Blessed with a high-90's fastball, and a complete arsenal of three other pitches--a wicked sharp-breaking curve, a deadly slider, and a change-up to die for. Hitters comment that his stuff is the best some of them have ever seen.
What is Lincecum's ultimate destiny?
The Giants have had phenoms before, whose careers blossomed early, only to fade fast. Think of Ron Bryant, John 'the Count' Montefusco, Atlee Hammaker, Scott Garrelts, Kelly Downs, Trevor Wilson, Osvaldo Fernandez, Noah Lowry, but especially Shawn Estes, another fire-balling left-hander, winning 19 games in his first full season (1997) while striking out 181. In the years since, Estes is 79-80, with six losing seasons for various clubs, and this year he's down on the Dodgers' Triple A farm club.
Short, thin left-handers don't wear well in the majors. A Ron Guidry, or a Sandy Koufax may have marvelous years, but their careers are often cut short by injury or exhaustion. Lincecum has a big, flailing delivery which some have compared to Juan Marichal, whose marvelous, high leg-kick wind-up may have helped him generate velocity, but also made it hard for hitters to pick up his delivery, and it was a thing of beauty to watch. Watching Lincecum unwind a torrid fastball, you wonder how long he'll be able to sustain that much momentum on his relatively modest frame. Are left-handers more prone to arm stress and injury than righties? I have no idea, but I presume someone has--baseball is, after all, a numbers game--produced statistics to mark that comparison.
Longevity in the bigs is a combination, usually, of superior physical skill, guile, and adjusting your style as you get older. The old fireballer--like Nolan Ryan, hard-thrower into his forties--is quite the exception. Even with modern "sports"-medicine, and delicate surgical procedures, a fragile arm will usually spell the early end to a promising career.
My guess is that Lincecum will probably have about 3-5 years of impressive dominance, averaging 15-18 wins a season, averaging 230 strikeouts, but that it's unlikely he'll still be vying for Cy Youngs into his thirties. His body is just too small to sustain the beating it's likely to get over that period, piling up 200+ innings per year. The quintessential durable pitcher is someone like Jack Morris, who averaged 212 innings per year over an 18 year career (and probably belongs in the Hall of Fame). Who is more valuable, in the long run, to a contending club--the 3 year phenom who wins 50 games but quickly disappears, or the workhorse who can give you 15 wins a year for 10 years?
Here's hoping Lincecum's durability matches his raw talent, and stays around for a while. We Giant fans could sure use him!
Posted by Curtis Faville at 8:58 AM

what are the ethnic roots of the name lincecum

maybe that's part of the hidden brutal nature of the game

i'll have to watch for this guy tim lincecum

that's a heck of a photo!

I always liked the NY Giants!

and then them Damn Yankeees

hey my grandfather played ball at that smae Baalimore school with The Babe!

in fact they both were signed up by the B-more team.. I cld tell you the story!

hey now we got a new fangled bb team here in D>C> the Nationals! bull shit! the Nats Nats stands for National Bohemian Beer! the guy with the one eye!

sure was neat seeing The Mick trot out to center field wearing knee braces on both legs!

I was in The Bob Wo;f Knot Hole Gang Bob W is Warner Wolf's dad..

I think you're living in the past, dear man.

I do now quite a bit, too. They say it's the effect of growing old (and perhaps not as alert). A tendency to remember things from earliest childhood, whereas one forgets what it was one went from the kitchen to the living room to get--!

My first memories of baseball were of listening on the radio on Saturday afternoons, when my step-dad would cook us lunch. I distinctly remember hearing the announcer say, at some juncture, "and Pee-Wee Reese fields that grounder"--I couldn't have been more than age 4 at the time (1951). I went to see a game at old Seals Stadium the first year the Giants came west. I found the complete box score for this game online a few years ago, but I can't find it now. Mike McCormick pitched, Ernie Banks golfed two homers, both Cepeda and Mays hit one. Young Felipe Alou--couldn't have been more than 19 at the time, spoke with my Stepdad in Spanish--"I don know if I stay up, you know, I only got fore homers...." just a big strapping kid. Willie wouldn't come over to the boxes to sign autographs, but my program had nearly everybody else that day--God knows what happened to it, probably sold by my Bro' on e.Bay by now, along with my complete 1958 Topps Baseball Cards!

the program that i had

one side with autographas of the Yankees other side the Senetors

was in a trunk 1959 with my writings notebooks
and when i got back from Mexoco all of my stuufff was chucked by my parents so that they cld use MY trunk to store their IRS tax papers!

shit! that was then> I write about NOW and my 'take'on things

I live for what it s worth in the write now.. irridatically!

Betty Funk in the play-ground said


so much for fucking!

and we used to flip them mathch you get two cards.


I once flipped cards with Mickey Vernon..

in the parking lot. he opened his trunk and gave me a baseball

All we can do is make some present BE THERE, sans any nostalgia or reserve.