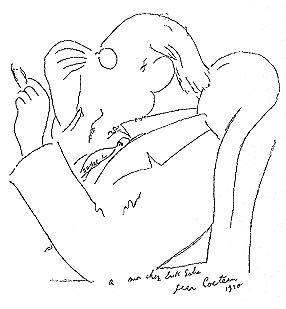 Of all the important Modernist composers, Satie has probably the largest influence and fame, relative to the number of, and musical ambition of, his compositions.

In my youth, I was much taken with Satie's compositions. Short, witty, occasionally quite wistful and sad, at other times lugubrious, at still other times insolent, ridiculous and wicked.

As early as the late 1880's, he had begun to compose (and publish) some of his revolutionary pieces (Gymnopedies, Gnossiennes, etc.). These works sound, even now, completely contemporary to our ears--clean, unburdened with any Victorian muddle, any thick harmonies. The piano was perfectly suited to Satie's modestly conceived music, which is characterized by simple lyrical lines, brevity, quick changes--a kind of short-hand.

What distinguished the spirit of Satie's inspiration--what makes him almost unique for his time--was a pre-Dada, pre-Surrealist approach--absurdist, nihilistic, crudely humorous at times, parodistic, mocking, and occasionally innocently lyrical. All these qualities--some might call them extra-musical, even anti-musical in feeling--have been enormously influential on later trends and composers.

"Classical music" as it is now popularly regarded, has several discrete threads from the late 19th Century and throughout the 20th: Symphonic music, based on the participation of large urban orchestral groups, church and liturgy, chamber music, the virtuoso tradition, opera, atonal music, music hall, folk music and country, jazz, and many, many others. Part of what Modernism means is the accommodation of such non-traditional elements into "serious" music. Satie was an early explorer in imagining that the edifice of serious 19th Century academic music should be, and could be, shaken to its foundations.

Satie thumbed his nose at the figure-heads of French academicism: Berlioz, Saint-Saens; and the "geniuses" the German-Viennese European taste: Wagner, Liszt.
His most famous piece, Trois Morceau en forme de Poire (Three Pieces in the Shape of a Pear) [1903], for piano duet, sounds crisply modern to our ears, while retaining an aura of sweet nostalgia reminiscent of Paris in its twilight, pre-WWI heydays.
Later, Satie went on to write more ambitious works--including some ballets--though his limited skills at orchestration prevented him from achieving more substantial performance pieces. The vast majority of his works were for keyboard solo, and were accessible to the untrained amateur. After WWI, Satie became associated with the Dadaists and Surrealists, whose principles of shock, revolt, defiant humor, and mystery were all ideas he had been thinking about for 20 years or more.
Among the pieces of his I love--in addition to almost all the piano works, which finally began to be generally available over the last two decades--is Socrate [1918], for voice and small orchestra (or piano reduction). It has a kind of liturgical monotony which is quite suited to the seriousness of the "dialectic" text (from Plato). Also, he was a master of children's music--pieces of pure lyrical simplicity, but with great feeling.
After he died, Darius Milhaud and a friend went to his dusty little suburban apartment and found a treasure-trove of memorabilia, unpublished compositions and letters. In addition they found seven velvet suits, which Satie had worn during his "velvet gentleman" period.
When Virgil Thomson went to Paris in the 'Twenties, he says that he went out and bought a three inch stack of Satie's keyboard music; which became the foundation for his attitude and style of composition. There was no other composer whose work more clearly and definitively embodied the spirit of the age.
When I went France in the 1990's, I visited the Erik Satie birthplace in Honfleur. The town has a beautiful tiny rectangular harbor surrounded by period houses. I fantasized little Erik scurrying down the town's narrow alley-ways in the 1870's. Our hotelier was a very stuffy fellow, and when I asked him about Satie, he straightened up pretentiously and replied "I am not an admirer of the work of Monsieur Satie!"
Posted by Curtis Faville at 5:20 PM

"I am not an admirer of the work of Monsieur Satie!"

ever see there notations on paper....

remeber Cage on the Gary More show... geeze The Gary Moore sho my grandmother's favorite... never missed in our house..

saw that show live on our 9" Philco!


:but, what DO I know I never did a thesis on this or anyboddhi else's work I just
go out of my way my (own) way

ther's lots of "good" stuff out there...

and 1955 George Rochberg did a book (which I have and "inhaled"...and actually fot high on)

THE HEXACHORD and the RELATION to the 12-TONE ROW

"Mirror Inversion, which will be our chief concern in this study, is a phenomenon not confined to music. It is a structural form in nature (italics itself, therefore its appearance in music should surprise now one [...]."

The pieces are so brief, like poems. Most of the classical composers went on so long, and you have to sit and listen and listen and listen until you lose your mind with boredom. Satie got his points over nice and clean. I can't listen to them any more because I know each note. I liked a notebook that was published of his ideas. Very amusing, almost as good as all the other writers of the period, if not better.

i've played all the gymnopedies and gnossiiennes on the guitar

recently a friend sent me the score for

don't know what i'll do with it

i am attracted to his theory behind
'furniture music"

Surrealist leader admitted no musicians to his fold, but Satie shared in an early 20th century French joie de vivre that can be found outside of surrealism in many minor writers from Henry Levet to Charles Cros -- and many others.

But music was never an aspect of orthodox surrealism.

Satie was more closely affiliated with Cocteau, who also has a kind of surrealist sensibility, but none of the surrealists accepted Cocteau because he was an opportunist.

Satie too was very interested in his public and said that publicity was a big part of what he was doing, and that generating publicity was his real genius.

Surrealists did that too but they pretended not to do it, so Satie and Cocteau and Dali struck them as abhorrent. Surrealists prided themselves on not doing anything about publicity.

erik was something of a clown but a very reclusive one

It's important not to take Satie's satiric commentary or his "absurdist" positions at face value. Much of what he said was humorous or intended to shock.

His music is quite serious, despite what at first may seem to be a flippant or off-handed character.

Some people still think music must always be "serious" and/or grave, to be good. That was one of the presumptions Satie was at some pains to dispel.

all the ipods with
one maybe two monotonous tones

Is Leon Redbone the Erik Satie of rock and roll?

Jarry was also from Honfleur.