Frederick Sommer [1905-1999] occupies an indistinct position in the history of photography, owing to the oddity and eccentric perspective of his art. He's not easy to place.
Somewhat unusually, Sommer was born in Angri, Italy and raised in Brazil. He studied to become a landscape architect at Cornell, but never practiced. He and his wife soon moved to Arizona, where Sommer began his long career as an experimental avant garde photographer.
It becomes clear to anyone who delves into his work, that Sommer's primary interest wasn't confined to any single genre or medium, but in aesthetics generally. His thinking and meditations on the effect of light on surfaces, the effects of time on matter (decay), and the metaphorical implications of ambiguous form are entirely original, and without precedent in the history of art. To get a sense of what he's about, you can't simply sample his visual works--you have to read his texts. These aren't densely philosophical tracts, or analytical disquisitions, but cryptic pronouncements in the manner of riddles or syllogistic conundrums.
Sommer was interested in how the transfer of light (reflectivity) between varieties of substance can evoke dialectics among disparate events or functions. The eye perceives phenomena via light, out of which it constructs an analogous counterpart (design, meaning). The metaphorical potential of any such counterpart bears a mysterious relationship to its source "in the external world." The process of what we call photography is, in its essence, a manipulation of the most mysterious and perhaps unknowable functions there are. The imprint of form, texture and mass upon the sensitized surface of the back of the eye occurs in almost the identical way that photographic projections are recorded on "light sensitive" surfaces. The eye is a camera.
The structure of the eye, the structure of anything, is a function of its use. In a philosophical sense, nothing that happens in the universe is wasted, or unnecessary, or accidental. Meaning is total. All living and non-living things emit energy, and "light." A camera is one tool in recording the ballet of matter, in its various reflectivity, of the halo of energy within which it is enveloped, by virtue of which it is perceived.
Vision is a continuous process of photographic images, a sequent pattern in the mind. Its efficiency deludes us into thinking of movement, and of our perception of reality, as being continuous, whereas it is in reality a deck of superimposed filmic membranes. Vision, one might say, is energized matter "looking at" itself. This reflexivity is one of the keys to Sommer's work.
What is film? What is a negative? What information does a two-dimensional surface carry? Sommer was interested in exploring the aesthetic implications of recorded image-making.
One of Sommer's famous images, is of a severed foot (below). A local physician, guessing that Sommer would be interested, contacted him and offered the anatomical fragment--which became available as the result of a bum having fallen asleep on the railroad tracks--as a potential photographic subject. Sommer was delighted. Reactions to this image are predictably intense. What is the point of recording something as horrifyingly painful and ghoulish as an amputated foot?
But Sommer's interest in this image is almost purely intellectual. On one level, it exhibits a beauty and sensuality which is in the tradition of all anatomical illustration. Da Vinci, after all, was possessed by an intense curiosity about the particulars of anatomical structure. In the ordinary course of experience, most people never come face to face with the disturbing fact of wounds, the way surgeons or medics do. Sommer's study (a still-life) asks the question directly: When we get beyond the initial shock value of the image, what do we actually think about it? In what sense does this foot "belong" to the man to whom it was once attached? In what sense, if any, is the foot "alive"? The camera, the negative, our eye(s), our human brain--each records the image of "itself" such that the severed foot becomes a metaphor for self-consciousness, of the neutral curiosity which drives all mental activity. Mind (an organ) perceives a separated limb (not its own) via the eye (a camera) and deduces, in descending order, surprise, revulsion, fascination, interest, and finally, distraction. 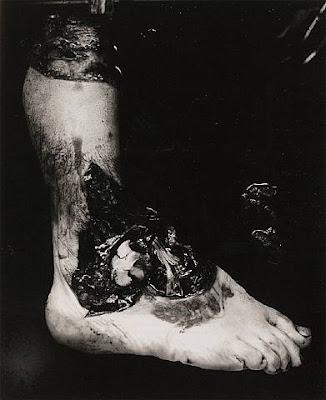 Pictures of children probably comprise the single most (over-) used subject-matter of the medium. Children are "little people"--so cute, so charming, so specific. What might it mean to photograph a child with the same intense probity one uses with adults? Is such regard inappropriate? Like all of Sommer's "portraits" this one of a kindergarten-aged girl has a hypnotic intensity. What we "see" is not a "child" but a being, suspended by her own concentration (or perhaps obedience, or a patient curiosity?). Of greater significance, however, is the reflexivity of the moment: The photographer is "taking a picture" of her, but she's also "taking a picture" of him (and us!) with her camera (eyes) too. Brain researchers believe that our brain stores every image, every impression, every smell, every taste, every feeling it receives from the five senses (as well as what it creates through the theater of dreams). In other words, Sommer has saved this image of the girl, but she has also saved the image which she sees too, the one which we can't see, of the photographer and whatever else is present in her field of vision at that moment. This simultaneous coincidence of image recordation has profound implications for our sense of the meaning of the photographic act. The girl has extraordinary eyes--they queue us into what the real subject of the portrait is. The weathered wood, which serves as backdrop, is a typical, repeated texture in Sommer images. 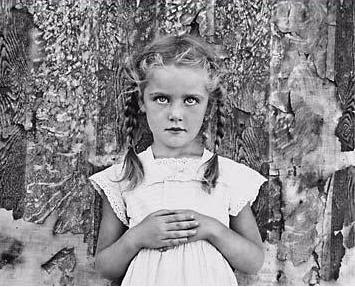 Sensitized surfaces. A negative is a transparent "film" or membrane which is light-"sensitized" by the application of a chemically active organic substance. Sommer frequently experimented with the parallel "surface" of two-dimensional planes, as subjects.
Panchromatic visible light photography is of course only one kind of image-making. X-rays, infra-red, ultraviolet, ortho--these are alternative modes of image recordation. Sommer was fascinated with the human body, or to be more precise, with the desire of humankind to understand itself, and by extension, all life forms. He pored over anatomical drawings and illustrations, using them often in collage or in fragmented isolation. Here, in Paracelsus [the 16th century physician/alchemist/astrologer, 1493-1541], Sommer employs a novel technique--oil on cellophane--to create a monochromatic image which suggests an anatomical dissection of a torso. It also suggests armor--there's almost a metallic quality--or a sort of plastic sculptural malleability. An ironic relationship exists between this membrane of reflectivity and the negative image recorded by the silver halide of the panchromatic film emulsion on the film membrane. The image is like an aesthetic "x-ray" of a metaphoric human torso, a clinical penetration of solids, turning them transparent, revealed. The symbolic power of vision to see into matter is one of Sommer's characteristic philosophical jokes. 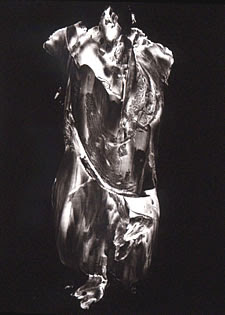 Another way of manipulating a two-dimensional surface is to score it, allowing the resulting masses to sag into three-dimensionality, offering seductive, ghostly designs which wrinkle and coagulate the light. The complexity of angles, of bulging convexities, and lurking voids is endlessly intriguing. As a defining log of possibilities, such abstractions bear a strong resemblance to some of Duchamp's experiments with chance operations. Each of Sommer's "cut-ups" is unique, and unrepeatable; they are neither sculpture, nor collage, but a hybrid. 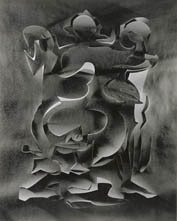 A number of Sommer's images involve dead animals. Wandering around desert country, such sights are common, the dry desert air preserving remains long after they would have been denuded under more temperate climes. The "shadow" of the body of this dead rabbit is in fact the imprint of its once-living flesh and bones. The literal "stuff" of the plane of the ground field is a kind of equivalent (see under Stieglitz) of the manipulated cellophane of Paracelsus. This elaboration of the visionary plane, tracking "ghosts" of once-animated beings, has almost a mystical aura. When our automated unmanned vehicles roll around on the surface of Mars, there is a weirdly absent sense to those images of dry red rocks and sand. It isn't "earth" surface (dirt)--it's an alien planetary deposit. Something of this "alien"t quality of things is native to Sommer's odd super-objectivity. 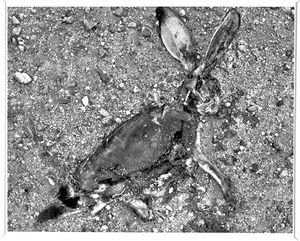 Earlier, in my post on Irving Penn's Portrait of de Kooning and Kiesler I postulated a theoretical relation between the combustion of photographic processes, and the progressive oxidizing decay of entropy, symbolized by the snowy white cigarette ash poised on the end of de Kooning's butt.
Sommer is like an alchemist, sifting the detritus of a dry landscape for particles of light, his mind of the very dust he sifts, glowing with fascination.
Posted by Curtis Faville at 6:01 PM

Again, thanks. (Many of your other blog postings here have elicited similar responses in me, but this is one of my favorites).