The Movie PATTON after 40 years

The death, this week, of Karl Malden (at the age of 97!!), reminded me, again, of the movie Patton [1970], in which he plays the part of Gen. Omar Bradley, Patton's primary foil in the film.
Malden was a veteran actor of stage and screen, and his big trademark slavic nose was very much in our face(s) for 50 years. He was the consummate professional. As was, too, George C. Scott, the lead who played Patton, which garnered him his only Oscar, which he refused (irascibly insisting that the Oscar routine had descended into shameless promotion and greed). I don't think many would disagree, given the unevenness of the award's history.
Scott was already a highly admired actor by the time the part of Patton came along. He'd already done Anatomy of a Murder [1959], The Hustler [1961], Adrian Messenger [1963], Strangelove [1964], The Flim-Flam Man [1967] and Petulia [1968] by this point. After Patton, he got sidetracked: He married Trish Van Devere, and made a string of cash-out flicks which did nothing for his reputation. Scott was a classic "heavy," able to marshall deep emotional resources of authority, anger, cockiness, amusement and paternal tenderness.
The same could be said, of course, about Malden, an actor whose raw energy seemed like a force of nature at times. Pitting these two actors against each other in Patton looks in retrospect to have been a masterstroke. Malden plays the straight, by-the-book man--the "GI General" as Ernie Pyle, the war correspondent, characterized him--against Scott's impulsive, audacious, grandstanding Patton.
As a piece of cinematic entertainment, Patton has epic pretensions. Set in Africa, Italy, England and France, it recounts key events in General Patton's wartime commands, shrewdly and dramatically building a portrayal of his strengths and weaknesses, his obsessions and contradictions.
The famous flag speech at the beginning, which never actually happened, perfectly sets out the terms of the thematic dialogue which the movie subsequently dramatizes. This speech is simultaneously addressed to the audience, to history and to posterity, as well as to an imaginary company of soldiers. It functions both as a formal "apology" for the film--much as the Stage Manager's opening speech in Our Town [1938] does--and a defense of character. The film contains a series of such speeches: The "apology" speech for the slapping offense, in Italy, the "destiny" speech outside Ike's headquarters office after being relieved of command, the love of battle speech, and the concluding "Roman emperor" speech at the end. This series of dramatic monologues holds the movie together, like philosophical bridges between the carefully selected battle scenes.
Of equal value to the film's continuity is Jerry Goldsmith's score, its combination of subtle mood-line effects and ersatz original martial music functions like a steel scaffolding for the narrative. Goldsmith won only a single Oscar (though being nominated 18 times!)--he should have won for Patton. Interestingly, the scene towards the end with the Russian balalaika band playing on the mezzanine above a joint forces celebration, created special requirements. Unable to find enough actual balalaikas, or balalaika players, to perform in the movie, Goldsmith actually had to go out and find enough balalaikas, and train men to play them!
Though the film purports to be biographical, apparently a lot of the story is simply made up for dramatic effect. But artistic license is certainly justified: Truth is usually stranger than fiction, but we seldom get the real story to begin with, so playwrights and screenwriters have to exercise a little ingenuity to make things more effective. After all, it is the distilled essence of character and the fulcrums of action which makes the best stories, not a dry recounting of events.
One very effective technique employed by Francis Ford Coppola and Edmund H. North (the screenwriters), is the evocation of classical history and echoes: Patton's speech about the Romans and Carthaginians in North Africa, the exploits of Alcibiades in ancient Sicily, of Frederick the Great, of von Schlieffen's plan for defeat of the French in the hedge-row country, of the Roman emperors' victory parades at the end as Patton walks towards a towering windmill. This puts both Patton's character, and the significance of events, into a more serious perspective, setting a contrast between the dignity and austerity of the judgment of history, and the expedient demands of current conflict. Patton's notion of reincarnation, of participating (repeatedly) in events through history, lends a sense of timelessness, of inevitability. "How I hate the 20th Century," his character says, because chivalry and honor and noble motives no longer matter in the world of modern warfare.
Both Malden and Scott had notoriously ugly snouts. In one scene early in the film, Patton remarks that the one thing of which he was most terrified as a soldier, was being shot right in the nose. Bradley (Malden) replies "and such a handsome nose, George," as both actors smile in ironic acknowledgment. 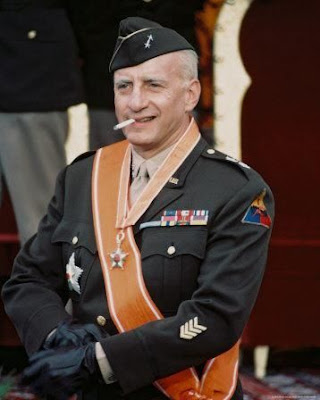 Posted by Curtis Faville at 9:49 AM

Malden ws no sloutch either in

one I remember w Kirk Douglas...

I loved Malden in One-Eyed Jacks, a movie I've done a blog on previously. He and Brando just had a ball in that.

"don't leave home with out it."

heck I recall something he did on The Twilight Zone..

and some live stuff on early tv well, middle tv?

I think he played Blanche's husband or some thing

Brando was a cool guy! and so was Laughton so was Leigh so was Taylor so was Burton and so was Malden ..

craftsmen to the bone

shit! here I am responding to a fucking blog.... how fucking satisfying and productive,,,

My Little Margie also died this past week..

Well, Ed, it's all a part of the same swirl.

The galaxies are spinning apart endlessly.

What do we know of eternity?

Love the anecdote about the balalaikas.

Heck, I love reading just about anything about balalaikas.

It's one of those words, ya know?

The instrument also figures in the epic film Dr. Zhivago, at the end when Zhivago's presumed daughter is seen with one slung over one shoulder crossing over the damn road.