On a Poem by Seamus Heaney - 'The Rain Stick' 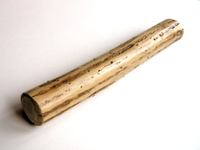 Seamus Heaney writes a traditionally structured and valenced sort of poem--he's never deviated very far from his habitual forms--2 or 3 or 4 line stanzas, or outright sonnets--but his inventiveness and light wit have intrigued me since the 1960's, when I first read his poems in The New Yorker.

One of my favorite Heaney poems is 'The Rain Stick.' For those who may not be familiar, the Saguaro cactus, which is native to the American Southwest, strikes an impressive profile-figure on the desert landscape, shooting up 30 or 40 feet into the air, their raised blunt curved arms, striated with rows of giant spikes (thorns).
When these giant cacti die, the waxy green pulp dries and fades, revealing the bony vertical rods of cellulose which form the "skeleton" of the plant. The hollow "tubes" are hacked down by native Americans, filled with seeds or small pebbles and their ends sealed off, producing a kind of huge rattle. The sound that is produced by tipping these tubes upsidedown and back again, sounds exactly like raindrops hitting dusty earth, a gentle "shhhh" or whirring noise familar to anyone whose been in a desert rainstorm. The sound thus produced evokes all the associations--the coolness, the sudden ionization of ozone in the atmosphere, the contrast of the large discrete drops--one experiences in a desert rain. A very vivid evocation.
Heaney's poem is an innocently offered description of the experience of handling one of these rainsticks, the originality of a child's delight in an ingenious toy. Nothing like it in Ireland--Heaney's native land--so it's an entirely novel encounter, likely to be treated as such. A mental souvenir vouchsafed from the exotic drylands of Arizona or New Mexico.
The Rain Stick
Up-end the stick and what happens next
Is a music that you never would have known
To listen for. In a cactus stalk
Downpour, sluice-rush, spillage and backwash
Come flowing through. You stand there like a pipe
Being played by water, you shake it again lightly
And diminuendo runs through all its scales
Like a gutter stopping trickling. And now here comes
A sprinkle of drops out of the freshened leaves,
Then subtle little wets off grass and daisies;
The glitter-drizzle, almost-breaths of air.
Up-end the stick again. What happens next
Is undiminished for having happened once,
Twice, ten, and thousand times before.
Who cares if all the music that transpires
Is the fall of grit or dry seeds through a cactus?
You are like a rich man entering heaven
Through the ear of a raindrop. Listen now again.
This is a straightforward poem in almost every sense. The use of classic onomatapoeia to imitate the sense, if not the actual physical sound-sensation, of the rain-stick's patter--"the glitter drizzle"; "the subtle little wets off grass"--"like a pipe being played by water."
The pleasure which is perceived at the primitive level--"is undiminished" through repetition, and you are "like a rich man entering heaven / Through the ear of a raindrop" (a delightful play upon the old phrase "it is easier for a camel to go through the eye of a needle than for a rich man to enter the kingdom of God"). A raindrop thus acquires the symbolic quality of an instrument of divine transmission.
What I admire about the poem is its transparent guilelessness. It isn't trying to convince you of something which the poet feels you need to know for your own good. It's a gift outright, a piece of the wondrous fabric of direct experience, ethically neutral, without any baggage.
Do we "exploit" the Indian culture by writing about it? Do we "possess" it for aesthetic exploitation? Or does it exist right at the level of juvenile apprehension, where wonder and intrigue light up our sensibilities with curiosity and delight? The Rain Stick--a totem object, a sacred tool to summon life-giving water.
Posted by Curtis Faville at 7:42 PM

I was gifted to me by a poet-friend who was here
and visited The American Indian Museum (D.C.) about 3 years ago.


I usually just flip it over and "listen to rain trickling
dow
into silence...

now thanks to this poem/observation

I have just for the first time
shaken the "stick" as the pellets fall makeing it an "whole nuther 'thing'"... a rattle, it s magic...

a very sympathetic (and attentive) reading of Heaney's poem. But I see also a lament for the loss of something 'essentially' native-American—no poet as attuned as he was to cultural landscapes anywhere would overlook it—: I see that especially in the line "Is undminished for having happened once" or perhaps "Is a music that you never would have known/To listen for".

I think there's a need to be cognizant of what's not there, such as all those poetic "associations" that the Saguaro cactus can offer only to poetic ears far removed from the cultural "wasteland" America's become. Heaney's poem can also be read as eco-text, too.

Curtis, you might also like the poetry of Heaney's Irish contemporary Michael Longley, a poet who writes only about his own country.

Thanks, I wouldn't have known about the cactus and its mercantilization into the sacred and ludic, otherwise. The only part I didn't like of the poem was "Listen now again." I think he could have left that out.

It seemed a little pushy, and annoyed me. Too bad it was the last line. It wrecked the whole poem for me.

It was written in the imperative, and I felt that it was a bit imperialistic, or pushy. Don't you agree that the poem would be better to end on "raindrop"?

This poem is "ethically neutral" only if "ethics" is narrowly defined.

I believe it a moral imperative to be open to the wonder of the rain sticks of the world. To be curious about "what happens next."

The first part of the second line of the third stanza (whew!) tiptoes to the edge of being too cloying: "Like a gutter stopping trickling." The two gerunds are almost one two many.

The best part of the poem, to me, is the twice-repeated phrase "what happens next." It's a neat alternative to the often too-often used "suddenly" or the too drab "then." And of course the present tense puts you there now. And the phrase perfectly signals the curiosity, the observing eye and listening ears of the poet, and d implies his wonder.

This is a lyrical expression of the miniscule beauty that surrounds
us.

It tells us to stop and look around.Appreciate the wonder that exists in natural things.

If we hurriedly go through our lives at a million miles an hour,we'll miss so much of what really matters.

I was just looking for other people's comments on "The Rain Stick" and found your lovely remarks. Perhaps you'd be interested in my (rather lengthy) discussion of the poem:

I still love the poem even after having immersed myself in it so completely. The project led me to read all of Heaney's work and essays, in an attempt to highlight what is going on when the rain stick is upended.

Hi, have been enjoying the discussion on 'The Rainstick, in fact have just shared my rainstick with hundreds of school students in Croke Park stadium Dublin, conference on global issues led by Worldwise. Have taken that rainstick now into loads of classrooms and got kids to write their own 'rain' poems. I've written this rich classroom experience up in an article for Poetry Ireland News (may/june 2012)titled 'Making Rain' - exploring the sound of the stick and the Seamus Heaney poem - taking the long way round towards language, poetry. Pete Mullineaux, Galway, Ireland.

Really Kirby, "Imperialistic"? I don't agree with you at all. It is not an imperative, it is an invitation. But then again, Lutheran's aren't really all that comfortable with the whole "invitation" thing, are we? Maybe that's why you cringe in despair over an invitation.

Really, Kirby, "Imperialistic?" How utterly PC you are. But I cannot agree with your comment at all. It is not written as an imperative, but rather as an invitation. That may be the problem; we Lutherans have historically not been very good with the whole "invitation" thing, have we? Maybe that is why you recoil in fear, rather than leap for joy.