The Shawshank Redemption - A Prison Fable

This movie has everything except romance. Well, you can't have everything. That's the weakness of prison flicks, no women allowed!
Like a lot of people, I missed this one when it was first released in 1994. But it has legs. The momentum is so large now, that IMDB, the movie reference site online, claims its users vote it the all time best movie ever!
That's high praise for a movie that almost went unnoticed when it first appeared. Usually, movies with low initial critical acclaim can't be resuscitated retrospectively--even, or especially, by critics noted for their effete tastes. Either the public likes them right away, or they never recover from their initial neglect.
The central irony of the movie--that criminals preternaturally can't admit guilt--is repeated over and over again in the script, like a refrain. We know that Andy Dufresne didn't murder his wife and her lover, but that almost doesn't matter: The drama and tension are all about life on the inside, and how this lily-livered bank officer will deal with the vicissitudes of multi-racial conflict and institutional cruelty.
The script is based on a story by (surprise!) Stephen King. Credit due!
The ultimate "redemption" of the story involves the victory over evil (a corrupt prison warden and his brutal subordinates) by Dufresne, and his eventual reuniting on the outside with 'Red' Redding after half a lifetime in the joint.
The movie feels very "Thirties"-ish--it's set in a Maine prison during the 1950's and '60's--and the secondary characters are the usual motley "types" who more or less act in a predictably hackneyed manner. The scenes of violence and corruption are unambiguous and simplistic, meant to drive home the basic oppositions and direct the audience's sympathies and indignation: Good men (even criminals) are basically good, and Bad men are bad through-and-through. There's no redemption for men like Warden Norton and Captain Hadley--they're going to Hell, and they deserve it. The story assumes that the prison system is inherently dehumanizing, deliberately destructive of human potential--the only "redemption" is through friendship and--as Red says in the film "the most dangerous thing"--hope.
But hope is all that men like Red have. If the institutions of punishment and cruelty can take your hope away, you have nothing left, you're just a bug in a bottle. Dufresne refuses to accept that there is no hope--it's his training. He lives by his wits, and eventually discovers a way--through patient effort and ingenuity--of overcoming the steep odds against him, and manages to save his best friend into the bargain--certainly an inspiring fable of courage and fidelity. 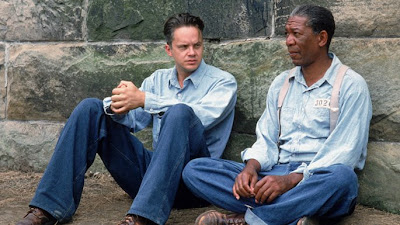 There are several sub-plots to the movie, which give it multiple dimensions. There's the episode of the cocky young three-timer who tries to give evidence to the Warden about a man who had confessed having done the crime for which Dufresne has been wrongly convicted--who the Warden has shot in the yard. There's the story of the long-timer Brooks Hatlen (played brilliantly by the late James Whitmore) who has a crow for a pet, and eventually hangs himself from a rafter when he's been released back into the community after 50 years, because he's been so "institutionalized" he can't function on the outside. There's the story of the "bull queer" Bogs Diamond who likes to beat his Nellies into submission before he rapes them, and is himself eventually beaten nearly to death by Hadley. There's the tale of Warden Norton (again, brilliantly played by Bob Gunton, a highly underrated actor for sure) whose appetite for sleazy, vile corruption eventually destroys him. And of course Red (played by Morgan Freeman, in a career-defining performance), who is inspired and "redeemed" by Dufresne. 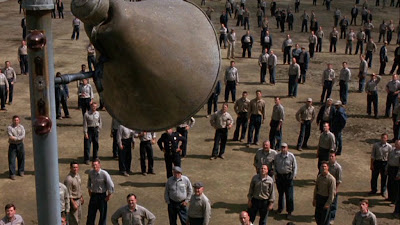 Despite all the cliches and improbable scenes--like the Mozart broadcast over the PA system--or the beer party on the tar roof--or Dufresne's daring escape (at least as improbable, if not more, as the Count of Monte Cristo's from the Chateau d'If!)--the movie comes off as a classic morality play, in a style we would have thought dead in moviemaking since the early 1950's.
The story posits the usual homily that though fate may play the ultimate trick on you, a belief in the possibility of redemption is never completely out of the question. There's nothing religious about this, though the movie uses the literal Bible to make a point about how religious dogma may be misinterpreted and misused by evil men (like Warden Norton). The ultimate point about Dufresne's escape is much more in the vein of "God helps those who helps themselves" rather than that prayer and humble good works will earn you points in the next life.
If Shawshank has a message, it's that friendship and hope are more effective--and worthwhile--than humble submission. The movie's final sense of triumph, when Freeman and Robbins meet on the white beach in Mexico, is about the value of improbable loyalty and comradeship, not unlike that which soldiers experience in conflict. But these two ex-cons aren't soldiers, they're ordinary men upon whom fate has played the cruelest of jokes. But they get the last laugh, and it's an exhilarating one.

Posted by Curtis Faville at 9:53 AM