A Modest Proposal & A Footnote 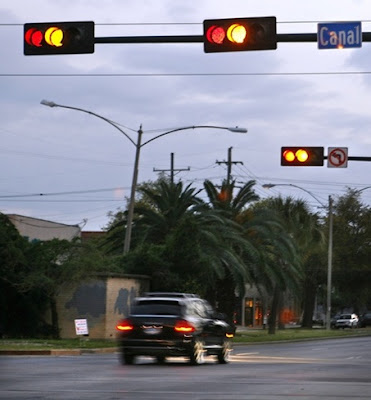 There are a lot of things wrong with our world, but try making a simple, sensible suggestion to solve just one tiny problem.
Have you ever sat disconsolately at a stoplight, waiting as NO TRAFFIC passed across the intersecting road?
We're all aware that the technology of traffic control has become a lot more sophisticated than it used to be. They have sensors under the pavement, sensors that read oncoming traffic from the opposite signal standard, sensors that read cars passing through an intersection after the light has turned red (triggering a camera which records your license plate number and automatically sends you a ticket!).
Whoever it is that sets the timing on intersections in our neck of the woods needs a lesson in common sense. One of the main arterial trunk roads from the residential hills in the East Bay runs directly West, downhill, towards the freeway on-ramps, across a half dozen well-traveled suburban throughways.
These intersection signals are uniformly set at about 1 minute and 15 seconds each for crossings at four four-lane interchanges, night and day, without variation. Ignoring the commute hour log-jams, they hold back hundreds of cars for no particular reasons, simply because no one has taken the trouble to adjust them for peak load usage on certain streets.
How stupid is this?
Think, if you will, about the waste in human time. E.B. White once said that if you wanted a refutation of the value of the industrial revolution, look at the expressions on the faces of drivers who wait for stoplights to change. Then think about the waste in resources. We waste incredible amounts of gasoline and oil as automobiles "idle" while vehicles aren't moving. It's bad enough when people just idle while talking to a pedestrian, or leave their car idling while they run into a business to do an errand, or to make a call. On an individual level, people tend to scoff at this. If, say, only 3% of your gas is spent on idling (that is, not pushing the car around), how much could that actually cost you? Not much, right?
Probably not. But multiply that inconvenience and wasted fuel by tens of millions, 24 hours a day. We all know that gridlock and clogged freeways account for a lot of waste, but what about those profligate uses we DO have some control over?
How many billions of gallons of gas does humanity simply burn up out of laziness, stupidity, crowding, poor driving habits, etc.?
But here's one practical suggestion: Install automated sensors in all traffic signal intersections. If there's no traffic coming from the other road, the light should change promptly to allow for the vehicles which are waiting to pass. "We have the technology!" It's true! How difficult would it be to implement this practical improvement? How many millions of gallons of gas would be saved, simply by installing traffic sensors to count build-up and facilitate passage?
***
I saw this bumper sticker on a VW Vanagon today: "My other car is a Pynchon novel." Apparently, this is by now a familiar sticker, but I hadn't seen it before. Very witty.
Posted by Curtis Faville at 5:30 PM

What's the price tag on this innovation? A traffic light costs about 200,000 dollars to put in, I was told about ten years ago.

It's not just th eequipment, but the inspections by all the agencies -- electrical, environmental, and others.

Finland has the exact thing you name on all its traffic lights.

They also have you pay all bills online, electronically.

It's very easy to pay your bills. You can do a whole day's worth in about three minutes.

The whole idea of checks has been gone for at least twenty years over there.

everyone wants to drive faster these days

people need to learn to stay home and relax

1) It's an opportunity for an unanticipated rest for a minute or so.

2) I once heard of a guy who read War and Peace in a year, just at red lights. Maybe it's apocryphal.

The government has a huge incentive in us not getting anywhere. The longer we sit the more they make in gas taxes. Stop voting for liberal morons who crave taxes.