Disclaimer: Readers should be aware that I have no military service in my background. My Stepfather never served (he was born in 1901), and my real Father was a conscientious objector in WWII. Nevertheless, my interest in war movies is not colored by a lack of sympathy for, or a naive rejection of the necessity for, the military life-style in general. 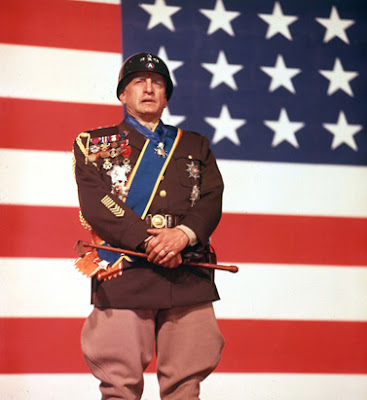 Military narratives often focus on the problems of command. Like traditional theater, which is frequently devoted to the problems of royalty, these stories follow the brass through its private journeys and official duties, revealing telling detail, contradictions and weaknesses in character, and the challenges and responsibilities of directing the energies and campaigns of bodies of men and materiel.

The Caine Mutiny [1951] was the central work of Herman Wouk's career, a novel about a mutiny aboard a mine-sweeper in the Pacific Theater during a typhoon in World War II, which was later adapted to the stage (The Caine Mutiny Court-Martial [1953]), and finally to the screen in 1954. The plot is atypical for Hollywood: Rather than the gung-ho version of American soldiers or sailors, this is a psychological study of a captain who fails under the stress of command, endangering his ship and crew, and eventually is embarrassed in a dramatic court-martial trial. Even more unusually, Wouk further complicates matters by taking sides against the mutineers, in open sympathy with the discredited Captain Queeg (played by Humphrey Bogart, in one of his best roles). The action is seen from the perspective of a novice ensign, Willis Keith (late of Princeton), through whose eyes everything is seen as if it were, well, a movie; he's a man to whom things happen. Willie is naive, and something of a bumbler. He's a poor judge of character, and is rather headstrong.
The setting is similar in its way to another WWII classic, Mister Roberts [1955]. Both stories/films are set on small ships, have typically "wacky" crews, and are far enough away from real battle action to allow the author/director to concentrate on the interaction of characters. In both, the Captain is an uptight disciplinarian, lacking imagination, who tries to blame the crew for his own shortcomings and failures; in both, a courageous, but unimaginative first officer (Fonda as Mister Roberts, Van Johnson as Lieutenant Maryk in Caine) attempts to mend fences and keep things from falling apart. In Mister Roberts, the Captain's cruelty and abuse of command are treated as amusing irritations; in The Caine Mutiny, Queeg's failure becomes the occasion for a serious morality play on the theme of the misuse of power, and the corrupting influence of irresponsible intellectual playboys.
As Captain Queeg descends into his paranoid delusions, we can see (and begin to enjoy) his fall from grace and eventual embarrassment in the court-martial. "Not so fast!" Wouk seems to be saying. The defense attorney, Barney Greenwald (played by Jose Ferrer), attacks Lieutenant Keefer (Fred MacMurray), for having executed the plot to seize command (by planting the seeds of mutiny in the mind of Maryk), as the "real Author of the Caine Mutiny." The irony of identifying the fictional "author" of the mutiny as the guilty party (who will "write [his] novel, go to Hollywood, and make a million bucks") is not lost on the audience. The moral ambiguity of turning the spotlight away from Queeg's pathetic failures, and pointing it at the cynical, spineless Keefer, strikes us today as a somewhat reactionary stance. Is Wouk telling us that incompetence under fire is preferable to intellectual curiosity? Does Greenwald speak for Wouk, or is Wouk trying to have it both ways, as the "real Author" objectifying the fictional Author as a personification of his own guilt?
Under conditions of war, behavior may not be measurable in the same way as it is during peacetime.
In Patton, George C. Scott, after having been formally reprimanded by Eisenhauer for slapping a shell-shocked young private in a first-aid tent, asks "What is [this] compared to war? The sonofabitch should have been tried and executed for cowardice!" The screenwriters--Francis Coppola and Edmund North--attempt to portray Patton from the inside out, as an adolescent fantasist and petulant megalomaniac. His German enemies see him as the quintessential commander--ruthless, uncompromising, and efficient. Meanwhile, the Allied Command, worried about public relations and how things will appear, is wary of and embarrassed by Patton's frankness and aggressive manner.
The point of Patton seems to be that military valor, as a quality or hybrid predisposition, is limited to the context in which it thrives. Patton, whose daring and audacity ("Toujours l'audace") brought his army victory in the European campaign, was that enigma "the perfect warrior" who could not survive outside the engagement of irrevocable conflict.
Comparing the two figures, we have on the one hand a small-minded, "by-the-book" incompetent, who attempts to cover his failures by blaming his own staff, and on the other, a self-obsessed, arrogant demi-god whose dreams of glory are born on the backs of his soldiers. Both are caricatures of responsible leadership. 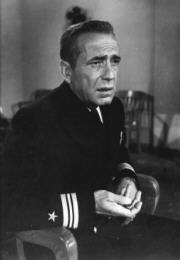 In each film, the central authority figure becomes the vehicle for an elaborate construction of character--in Scott's version, a blustering, vain, "realist" convinced of his own righteousness, unwilling to be tamed--and in Bogart's version, a slinking apologist, hiding behind rote regulation and whining self-pity.
These two films get at the heart of America's divided sense of the value and purpose of militarism--as a style of life, and as an interpretation of the meaning of human conflict. In each case, we seek to identify a reliable protagonist, but in neither case, are we allowed a sympathetic, unambiguous example. When you open up the interior psychological reality of individual character, you inevitably discover contradiction. The violence of open conflict, and the stress of authority to direct it, are in a sense irreconcilable. Men are not machines. In a democracy, the humanistic qualities we value as responsible citizens, are in direct opposition to the qualities that make efficient soldiers. We expect of our leaders that they will serve virtuous ends, but may be forced to employ terrible means to accomplish them. These narratives are about how those contradictions twist and maim individual men, distorting their natures in the service of cruel alternatives.
Posted by Curtis Faville at 7:55 PM

In a world of 9 billion, the union
of

seems not only possible
but highly aesthetic

when the general 'look'
of any human city is basically

there is the sense that even being human anymore is

against my imperial imagination
even the world's hyper-rich
are woolen paupers
in tawdry leaf-husks..

I am completely bored with this rock. What a dud fire-cracker the world turned out to be..

Even nature is boring.

One damn rock with chicken-monkeys
in the whole universe.

What a sick joke.

you left out All Quiet on the Western Front

A good post, with your breakdown about the social and personal aspects of valour. Patton, one might suppose, was someone who went beyond the reasonable embrace of his best and worst virtues and saw himself instead as merely perfect, a being in pursuit of his destiny. This would make him a sociopath, someone for whom the exterior world wasn't worth bothering with unless it were embroiled in crisis and catastrophe only war can bring on. The right man in the right place, at the right time , on the right side.

A small matter, a niggle at best:
"...reprimanded by Eisenhauer..."

Should that be Eisenhower instead?