Last Sunday, the 49ers, after a thoroughly lackluster first half against the Houston Texans, in which they fell behind 21-0, made a comeback in the second half, resorting to Alex Smith, the spurned casualty of the Nolan coaching years, over Sean Hill, who is the designated first string starting quarterback. since Mike Singletary took over the team last year when Nolan was fired. 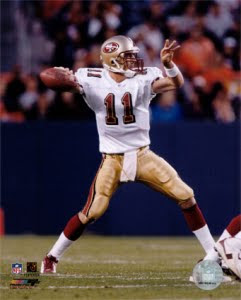 Smith's career in the NFL seemed on the rocks, after three lackluster seasons as the 49ers first round pick in the draft. When Nolan was fired, most of the team he had assembled has been dismantled, and Singletary let it be known that his football philosophy would be very different from Nolan's, with an emphasis on the ground game, ball control, clock management, with a minimum of mistakes, and an aggressive, take-no-prisoners defense. Sean Hill, a talented second-stringer (or "manager") as he has come to be called, was the kind of quarterback Singletary evidently preferred:  Low profile, prudent, careful, conservative, even-tempered, and well-prepared (though never capable of rising above the low 80's in quarterback rating). But Hill's skills are acknowledged to be less than stellar. Hill will never throw four touchdowns in a game, or pull off unlikely come-from-behind wins. That's not his style. 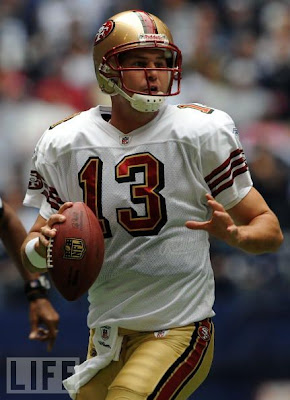 No NFL team can be successful, especially year over year, without a very talented quarterback. There will occasionally be a very well-balanced team, in which a great ground game, a stellar defensive unit, great special teams, and some luck, will make it to the Super Bowl with a mediocre quarterback at the helm. But without the ability to pass accurately and under pressure, no NFL quarterback is likely to last more than a couple of years, except as a back-up. In the Modern Era of professional football (since 1960) virtually every team that wins more than 8 games in a season, has superior talent at that position.
During Nolan's tenure, Smith repeatedly failed to live up to his high billing. He was consistently inaccurate, and he had trouble in clutch situations, frequently throwing crucial interceptions at key points in games, usually towards the end of games. He seemed to lack focus. When he suffered a throwing arm injury, Nolan attempted to blame part of the team's ineffectiveness on his young quarterback when he returned prematurely from rehab. At the time, it appeared as if Nolan was looking for a scapegoat, or that maybe Smith might be a primadonna, unable to play "through" his pain. But after the injury was supposedly healed, he continued to be ineffective, and was replaced mid-season in 2008, by Hill, who proceeded to put up a string of victories, without flash or numbers, just "getting the job done" week after week.
During Smith's earlier tenure, games were painful to watch, as--it now seems clear--he lacked the essential qualities of a fully formed pro-QB. No matter how competitive the team may have seemed on any given Sunday, Smith's unpredictable performance nearly always put the team into jeopardy. He would occasionally get on a roll, throw a couple of impressive touchdown passes, then fall back and lose a game with a key interception late in the fourth quarter. This was his pattern, over and over, which is born out by his stats. With his tall, thin build, he's not a scrambler, or a runner (as Steve Young was), and he doesn't have "great eyes" to see openings through the zigzagging maze of players moving downfield.
Perhaps most distressingly, Smith lacks mental focus under pressure, which is the hallmark of all great, competitive quarterbacks: the ability to put distractions aside, and concentrate on a narrow series of options, and to improvise effectively at crucial moments. Joe Montana had this ability: In tight situations, he went into a kind of trance state--his face would go "blank"--in which nothing--crowd noise, yelling players and coaches, oncoming rushers--could distract him. He "got better" under stress.
Montana was a great quarterback, but we shouldn't even imagine that Hill or Smith possesses his level of skill-sets. Neither one of these men is remotely capable of taking the 49ers to a Super Bowl.
Under Singletary, the team's design for play will not emphasize the passing game. Singletary's whole philosophy is built around grunt football: Tough line-play, heavy pursuit, quick instinctual decisions learned by rote. For him, winning teams succeed by keeping the other team's offense off the field. Clock management. Grinding out 3-6 yard gains, beating the other side even when they know what's coming. Punishing football.
Smith's balletic whirl in the second half at Houston took the Texans completely by surprise. Having prepared all week for Hill's unimaginative, tight formation plays, they were off-guard against Smith's medium-range bombs to Vernon Davis and Michael Crabtree. It may have seemed as if the 49ers had forgotten what NFL offenses were capable of, in the right hands.
Nevertheless, there were disturbing, and familiar aspects to Smith's performance which were reminiscent of 2006 and 2007. He seemed confused on the field. During the last 8 minutes of the game, he seemed to be moving underwater, twice walking back from under center, failing to call time-out, and getting flagged for delay of game. During the last drive, he moved with excruciating slowness, as if he didn't understand how little time there was left in the game. Finally, with about a minute to go, he threw a mindless pass down the middle of the field, which was easily intercepted by the Texans. Some of this "confusion" may be attributable to rustiness, or insufficient mental preparation, though back-up quarterbacks are expected to be fully ready to play when called upon in a game. But not the dithering, not the slow-motion suspended animation, not the rash, imprudent pass under pressure.
There will certainly be calls for Smith to replace Hill at quarterback, based on this one short burst of effective performance. But it's important to remember that Texas was unprepared for him. Would he have done what he did, if he'd been the starting quarterback? Unlikely. Are we to expect that Smith has suddenly matured into the star he was once expected to be? Even more unlikely.
In the short term, Singletary must stick with Hill. The team, and its strategy, have been built around him, and his style of play: Ball control, minimal mistakes. Keep-away. To change horses now would be a mistake. Neither Smith nor Hill can be the long term solution to the 49ers quarterback problem. Until they can draft one, or purchase the services of one on the free agent market, they're unlikely to be better than an 8-8 team.
Stick with Hill, and wait for better times.
Posted by Curtis Faville at 5:50 PM