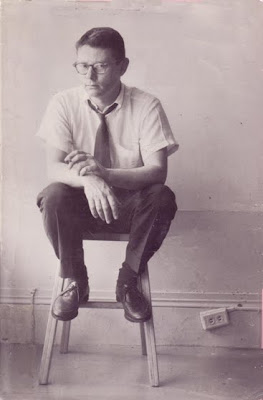 The poet Paul Blackburn liked to use simple codes and schedules in his poetry, to mark the quotidian signs and transfer points of daily life. He may have helped create the "itinerary" poem, which later poets have used (viz, Ted Berrigan in his Train Ride).

I commuted to the city (San Francisco) for 27 years, using up (in sequence) the local AC Transit bus system, the Bay Area Rapid Transit system, and driving via my car(s)  over the highway across the Bay Bridge. By the end, I was so sick of any form of transportation (to work) that I still can't comfortably visit San Francisco without feeling the weight of all those years of drudgery on my shoulders. Often, in the wee hours of the early morning, in total darkness, I had existential reservations about how I'd ended up on this ride to nowhere. Ultimately, we all ride that train one last time, all the way to the end. Thankfully, I was able to get off before the end, retiring at age 54.
Paul Blackburn was a terrific poet who died way too young (at age 44). Though prolific, his entire output has an unfinished quality, because he never had the chance to write the great poems of his old(er) age. It was a tragedy. He took Pound's advice, and delved deep into Romance language poetry, translating, absorbing the Troubadour tradition. He was a modern day troubadour himself.
God bless his bones.
Poem Remembering Paul Blackburn
I took
A train
I don't
Know why
5:15
the old
red
eye
click-
ety
clack
.
I took
A job
I don't
Know why
.
They woke
Me up
At the end
Of the line
Oh my
Posted by Curtis Faville at 5:06 PM