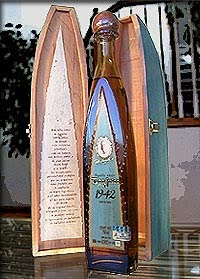 Anejo tequila is the aged version of tequila, put down in oak barrels in much the same way that other spirits and wines are the world over. Don Julio Gonzales, a major Mexican tequila producer, has been making cactus spirits since 1942. He named this Anejo (meaning "aged tequila" [at least 1 but no more than 3 years in the barrel]) "1942" to designate its uniqueness.

Traditionally, tequila was a peasants' libation, hot, dry, with a rather leathery-grassy flavor. Taken with lime, or salt, to "cut" its dryness. Lately, makers have been experimenting with the spirit, treating it in much the same way that distillers of scotch or bourbon or brandy do, aging it for varying lengths of time in oak to create more complex adaptations of its signature base flavor.
Don Julio Anejo 1942 has a light honey golden hue, a rich burnt sugar and almond nose, and a flavor which is a combination of caramel, chocolate syrup, flamed cherry, and rose-water. The underlying agave taste is masked, which puts some tasters off, complaining that it isn't a "true tequila" since the flavor of the plant is not emphasized. But the same could be true of any aged spirit. Do people complain that Lagavulin doesn't taste enough like its core barley component? That would be silly.
Don Julio Anejo 1942 can be drunk as an aperitif, with food (as I do, with tapas), or as a finish to a meal. Or even as a night-cap. It rivals some of the greatest scotches for strength and character. This may be a harbinger of the future for tequila, as it undergoes transformations down through time. In the history of spirits, its elaboration and appreciation has really just begun.
Posted by Curtis Faville at 7:09 AM

with the worm in it?

first time I tried this was in a little town in Oaxaca... the rug-man's brother made it and

I got the worm and 3 beautiful blankets (rugs) and almost a wife! I think they were Mixtecs..

Looks tasty, if a bit rico. I do enjoy the Patron silver, or whatever the good stuff in the blue bottles--the higher end cuervo's not bad either.


Best with like yucatan style spread---say roasted cabronita, all the exotic central. Amer. spices. Few grams of chiba too if Esmeraldissima abides .

--once in nogales we did some mescal guzzling. whoa. Watch out for the peddlars, and pimps (not to say their ....wares) not sure who ate the worm ....she had like a cool mariposa on her lower back.....

It actually costs between $100-150 a bottle. Not cheap, but at least, unlike wine, it will keep for another day.

It's more like a fortified spirit than a straight shot. I can't imagine anyone wanting to slam this stuff--it's just too good!

I have not harrassed anyone on his site, nor am I a misogynist, nor particularly anti-semitic (not caring for italian gangstas does not mean ones thinks all italians are scum. Instantiate "jewish gangsta" for italian g., and the same point holds).

I did object to Olson, alleged "poet" (routinely name-dropping beats, surrealists, etc) who defend the likes of Glenn Beck, Fox, Rush Limbaugh, NIXON (!). He's the one who should be censored, and really humiliated across the Net; indeed, that Silliman seems to agree with Kirby the punk indicates Silliman's own neo-con politics.

I don't think Olson has a real degree. Probably rich daddy,a bunch of lit. courses, family connections, etc (I heard he was at Naropa nirvanaland as well-- at least until his bogus born-again conversion. He even mocks the naropa kitties).

He and I disagree about a thousand things. How does that saying go? --Passionate opposition is true friendship?

Don't let your emotion overwhelm you, J. Stay in the argument. Make each word count. Stick by your guns, and try not to offend. If you're right, that should prevail, in the end, thought that's hard sometimes, to be patient until the bitter end.

I know, whenever I get mad, I've lost the argument.

Old beat kitties, however twisted, would have called one of their thug pals to jack him for that sort of sunday school BS (or in the case of say Kerouac, done it hisself).

I know quite a few straight misogynists--rapists are usually str8 for that matter. I find some of the g*y community offensive, but then I find baptists and mormons offensive as well. His generalizations are meaningless, and not amusing (even that clown Brett say that). His comments were verging on his usual Jerry Falwellness, regardless of the cute pseudo-literary comedy.

Given his pro-Beck/Fox rants, and his daily Falwell fluff, his fundamentalism, Olson should be terminated ASAP from any teaching job. Indeed, I intend to get a petition going. Pink-slip Kirby, today.

Probably best to confine the comments to the subject of the post. If I ever do a post specifically about Kirby, then we could get into his character here.

My site isn't particularly political per se, though I occasionally address political matters. But this one's about tequila.

J, do you have your own site? If not, maybe you should have one. You could address anything you wanted, at length, that way.

Tequila. Yes. Try the Patron silver--not the high-end Anejo, but smooth, rich (there are other types of anejo ah believe, which is just "aged). For margaritas, of course, one doesn't need the real fancy stuff.

Take a look at this website, do you think the price is right?