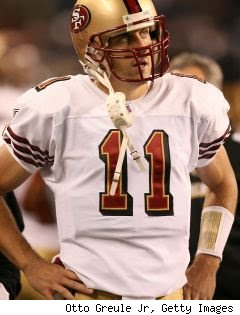 Once again, the 49ers have lost as a result of poor performance at the quarterback position.

I wanted to give you a tip about how to watch soccer, in case you decide to give it a second chance. Most of the action is "off the ball" that is, if you're only watching the ball, you're missing out on the game.

There is a lot of logic going on, but what generally works in soccer is when the logic breaks down, and suddenly there's an irrational moment where nobody knows quite what to do.

As a devotee of the irrational, I love the game.

Sorry if this is off-topic, but I wanted to link you back to that previous problem you mentioned a week or two back about how you hate to watch soccer.

I see football as a kind of corporate sport where orders are handed down and everyone is expected to obey.

Soccer is anarchism in motion -- there are basic rules, but the idea is to figure out how to push logic against logic until the logic splinters, and at that moment there is a scoring opportunity.


I find it amusing that you now post Kirby the Neo-Kon and don't post my writing, or others, Mr Faville.

Might you be mistaking something you posted on someone else's site, with mine?

Have at it, dude!

I posted a response to OOOOOOOO's last rant on Pound, and it did not appear.

Again, I posted, and it does not appear (as I posted the last comment contra 0OOOOOOO the neo-neo-platonist).

Why the moderation, anyway, especially since it's not a real high-powered site ala Sillyman?

Whatever. The Pound posts (and the dead dude from Tulare) were pretty cool.

There I set out my position regarding censure and censorship.

As you see, my sentiments are on the tolerant side of the fence.

I agree for most part, and did not moderate my blog for years, until some religious psychotics and trolls arrived, leaving obscene/threatening language when I was not around to delete it. So I now screen.