Two on the Aisle - The Narrative Split in Two Historical Dramas

The evolution of the cinematic medium has parallels to the development of narrative as a dramatic form. The novel grew out of the "non-fiction" account (Defoe), evolved further through the epistolary trope (Pamela & Clarissa), and eventually morphed from complex actions of animated companies of characters (Dickens and Trollope) into the variations we see today (Romance, Historical Fiction, Meta-fiction, Genres (including mystery, horror, fantasy, science fiction, etc.), and the various manifestations of "straight" narrative), as well as a few sports which don't fit any of the usual categories.
American cinema began by attempting to adapt classic historical narratives into abbreviated bowdlerized mise-en-scenes, in the silent era, and quickly graduated to cinematic-specific narrative actions, which have tended to dominate the medium since the inception of sound in the late 1920's. The increasing sophistication of technical means to make more convincing visualizations, etc., have really done little to alter our sense of the frame of context in movies. It's still a controlled sequence of narrative action, like a play that is captured in a single unalterable version. 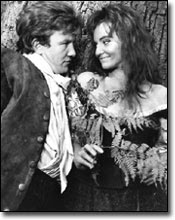 Early novels, which include those by Henry Fielding, used an omniscient narrative voice, perhaps equivalent to the narrative voice-over that is sometimes used in movies, like a sort of stage-manager (Our Town) or as a character's reflection (as in Walter Brennan's narrative voice in Red River) on the action. The use of narrative frames to conceptualize the action and provide a third point of reference between (or above) the dialectic between director and audience, can be seen in two historical cinematic dramas widely separated in time, but which share a similar appropriation: Each takes a famous novel with an historical subject, as its raw material, then adapts it in ingenious ways to make an original movie.
Tom Jones [Lopert Pictures Corporation, 1963, British], direction by Tony Richardson, script by John Osborne [Look Back in Anger], from the novel by Henry Fielding [1749], is a comic romp with considerable verisimilitude--i.e., the bumptiousness of country living, the dirt and grime of London city life. Borrowing certain tricks from the drama, Richardson and Osborne employed the use of direct communication with the audience, called "breaking the fourth wall" in theatrical terminology. In several scenes, Tom Jones, the "foundling" of the drama, speaks directly into the camera (at the audience) to comment upon the action, and in one instance putting his cocked hat over the camera-lens, preventing the audience from seeing his female companion's burgeoning bodice. This, combined with a contemporary voice-over in the manner of an 19th Century narrator, has the effect of setting up a contextual frame not unlike an omniscient narrator, commenting upon the action, as comic "asides," or ironic acknowledgment of the comic absurdity of the action.
In Richardson's hands, the technique allows the action to be perceived from multiple viewpoints, from the vantage of time (two centuries intervening), and of a moral and cultural exoticism of pre-industrial Britain, by contemporary audiences. It takes its story seriously, but insists upon a removal, which functions both to familiarize the action, as well as prodding or queuing the audience to its own participation. It offered a new way of appreciating historical material, not merely as costume drama, but as a method of ironic contrast. Tom Jones influenced later historical take-offs such as The Draughtsman's Contract [1982], as well as outright spoofs [Monty Python]. 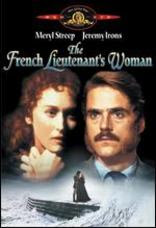 The French Lieutenant's Woman [Juniper Films, 1981, British] also explores new ground in the handling of historical material. Based on John Fowles's novel of the same name [Jonathan Cape, 1969], it manages to invent a new formal narrative technique, related to, but much more formally adventurous, than the earlier Tom Jones.
Fowles's novel explores the contrasts between Victorian England, in which the story is set, and the present day, by deliberately setting up a dialectic between our view of the past (through the omniscient narrative speaker), and the milieu in which the story would have been conceived, or imagined, by a contemporary writer, such as Thomas Hardy. In the novel, Fowles uses this narrative voice as a platform to explore philosophical issues--Darwinism, feminism, psychology, etc.--and offers the reader two distinct, but plausible, possible endings. It is as if he is saying you can have it both ways: Happy ending, or sad ending. Choose the one which suits your preferred view of life, your preferred version of the best ending for the story.
In adapting the story, Harold Pinter, who wrote the screenplay for the movie, could have chosen to use an omniscient narrative voice. He might, for instance, have used a "stage manager" role (as in the Wilder play Our Town) who introduces and comments upon the action, a figure both in and out of time (like the omniscient narrator). Instead, he chose to make two parallel plots:
The movie (of the story in the book),
and
The story of the making of the movie,
with
a parallel narrative involving the same
figures
in both narrative threads.
The two stories thus share identical settings--in Victorian England--and in present day England--in Lyme Regis, to be precise, a south shore seaside town which looks in many respects just as it would have in its original Victorian guise. The balancing of the two parallel love affairs--Charles Smithson and Sara Woodruff in 19th Century England--and Mike and Anna, the two contemporary actors playing their respective "selves" 100 years earlier in the present.
The succession of frames--a movie about the making of a movie in which the principles carry on a parallel adulterous love affair--allows the switching of the narrative threads back and forth between the present and the historical past, permitting a clear contrast between the behavioral mores and customs and options available to each couple in their separate segments of time. The movie thus becomes two stories, intertwined, allowing the present-day stand-ins (Mike and Anna) to take the authorial position, commenting upon their respective "fictional characters" in the movie they're making, while sorting out the difficulties caused by their mutual infidelity. The screenplay, by Harold Pinter, is one of the most ingenious formal gimmicks ever devised, doing complete justice to Fowles's "modern" view of Victorian society--even retaining the two endings (the "movie" version, as well as the modern "disappointing" one)--without the awkward device of a narrative "telling" or voice-over "commentary" as the historical action takes place.
Fowles's book, as a piece of literature, is for the most part a straightforward historical novel with modern asides, whereas The History of Tom Jones, a Foundling, by Henry Fielding, is a "contemporary" novel, with an ironic, picaresque frame. Both books, though, view with some amusement and interest the vicissitudes and complexities of class, sex, custom, and human frailty--in much the same spirit. The motives and tendencies which animate each work are locked inside the respective preconceptions and views of their eras, but the freedom permitted by Pinter's manipulation of time-in-narrative affords us a view of our own foibles and presumptions, and to understand, in some measure, the relativistic quality, as well as the enduring, of how the sexes relate to each other, despite changing outward fashions, and the progress of intellect and knowledge.
In any case, I would recommend reading Fowles's book before seeing Pinter's adaptation, but there's no harm in seeing Richardson's Tom Jones, because it's so much a piece of comic fluff that it could in no way harm one's apprehension of the literary masterpiece upon which it's based.
Posted by Curtis Faville at 11:32 AM

Authentici-tay, though my fave Brennan would be Old Man Clanton in Ford's My Darling Clementine. Hank Fonda also great, but ...Vic Mature seems out of place. The real Doc Holliday was a lean and mean gunslinger, and even a bit of a scholar, read a bit of latin, had done some medical training. The Earps themselves were not exactly the virtuous heroes Ho-wood has presented them as. Wyatt ran a brothel or three.

John Ford's flicks still impress--Grapes of Wrath included--though I'm not so down with Duke Wayne. Ford actually started out as a somewhat leftist director--yet as Fonda noted he moved towards the Nixonian/McCarthyite faction. Ford also drank a bit during shoots and actually punched out Fonda supposedly.