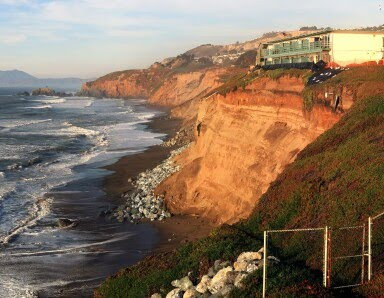 Your slide zone in (won't name the town, since you don't but just so you know I know, it starts with "K") screws with a lot more than "streets," "foundations" and "home improvements."

Check the docket at your county courthouse, or ask those who know, about the inter-neighbor disputes arising from property line disputes in your town. Since the survey markers along with everything else (or certain sections of everything else), only the good will of all involved prevents an insane multi-headed neighbor v. neighbor sue-fest over who knows what.

But some people don't play nice, or get all knicker-twisted about "their" property, and when the lawsuit hits -- thereby clouding title, because most everyone's lines have moved -- it's a big BIG fun mess for the insurance folks and the lawyers. The lawyers make out well, of course.

And the piling of rocks on the shore beneath the Pacifica apartment is easily understood. You -- as with many things in life -- just have to follow the money.

The effort to save it is being paid for by the property owner. It is probably costing him a 100 grand, maybe more. It will be a failure, of course it will.

But you see, if the property owner doesn't do this, when the building crumbles into the surf, and the owner makes a claim against his insurance policy, the insurer will say, "We don't owe you anything. It wasn't erosion that primarily caused the building to fall, but your failure to take reasonable steps to stop it, even though you knew there was a problem. Knowing that there's a giant hole in your roof, you can't leave it uncovered for two months and then claim the damage caused on the 61st day was not your fault. Claim denied."

See? This way, by spending a 100 or 200 grand, the owner of the Pacifica building takes a potent claim denial justification out of the insurance companies hands. He'll have a better shot at getting his two or three million value out of the thing.