At the height of the American Great Depression during the 1930's, official unemployment figures rose to as high as 30%. Especially hard hit were farmers, since the Dust Bowl--severe dust storms following decades of over-exploitation of the vast prairie lands of the middle of the country--occurred hard on the heels of the Stock Market Crash of 1929, and widespread bank failures, which further exacerbated the debt obligations of landholders throughout the Midwest, Southwest, and South. Hundreds of thousands were displaced, and ended up migrating North and West to the cities. The plains states became economic wastelands. It's in this context, amply documented in the 'Thirties by such famous photographers as Walker Evans, Dorothea Lange, Marion Post-Walcott, Ben Shahn, Berenice Abbott that forms the visual backdrop, thematic context, and basic subject-matter for Peter Bogdanovich's masterpiece of  'Seventies cinema, Paper Moon [Directors Company, 1973, black and white]. 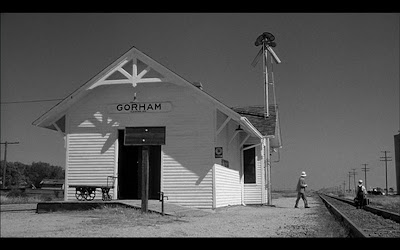 Starring Ryan O'Neal, and his young daughter Tatum (O'Neal), with parts for Madeline Kahn, John Hillerman and Randy Quaid (as the hick Oakie who leg wrestles with O'Neal), the film was a critical success, though somewhat under-appreciated at the time. Like Bogdanovich's earlier Last Picture Show [1971], it employs a High American Gothic trope, which is about equal parts nostalgia, social commentary, and tragi-comic small-town blues, to make its point.
The beautiful stark, black and white cinematography [Lazlo Kovacs]--it was shot mostly in remote Kansas and Missouri locations--is like the third character in the narrative, wherein classic perspectives, empty streets, seedy storefronts, and vintage automobiles compete for attention. Outwardly a period road picture set in the mid 1930's, about a traveling man named Moses Pray (Ryan O'Neil), a small-time hustler who will play any angle for a couple of dollars in his pocket, the story opens as he agrees to escort the daughter of a now deceased lover to her Aunt in Missouri. Slick Mose' quickly meets his match in the tough half-pint little Addie Loggins [Pray]. Little Addie is tough as nails, and a lot more savvy than Mose' is. At every turn she outsmarts and outmaneuvers Mose' in a way which is a sheer delight to watch. Tatum O'Neil gives an Oscar performance (which she won). Madeline Kahn (What's Up Doc, Blazing Saddles), in her second film ever also delivers the goods as Miss Trixie Delight, a lady of independent means, who meets up with the pair and sees her own angle. Every character in the film seems a caricature of some version you've seen in an original 'Thirties movie, from the hotel clerk, general store lady, country bootlegger, train-station master, black teen-aged maid, to the minister, the bible customer, and the deputy sherif. The grim realities of Depression Era economic conditions drive the sense of desperation and sad piety which underscore the hopelessness and loneliness which threaten to drag everyone into perdition.
As the story unfolds, we come to realize that not only are Mose's suspicions that Addie is his real daughter probably correct, but that they're natural partners and soul-mates. Like some cock-eyed old married couple, they may betray and taunt one another, but their affection for each another is undeniable. Tatum O'Neal's precocious and charming performance is the equal of her Father's, and their scenes are like watching a smooth comedy team in action. 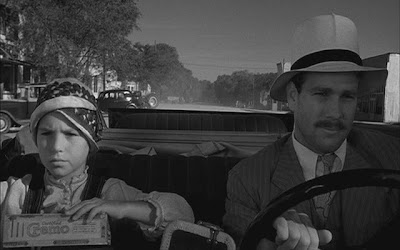 Combined with the gorgeous period settings, are period music and radio shows, like Amos N Andy, Jack Benny, Fred Allen, Ozzie Nelson--all those tinny, ingratiating high-pitched voices coming through scratchy speakers. The world of 1930's mid-America is un-sophisticated, and unassuming. There's a sort of forlorn, forsaken quality, as empty as the long, lonely desolate perspectives down windy Main Streets and the straight RR tracks out of town. These characters aren't out to explore the West, in search of a New World, and their prospects aren't bright. They're just hoping to get along in any way they can. Moses Pray is a part of the troubled society of which he's a symptom, but he's also separate from it, and he and his presumptive daughter are like a miniature Bonnie & Clyde team, terrorizing Kansas and Missouri with a small-time Bible hustle--a bleak landscape, chalky and sooty, where good and evil may appear as cartoon caricatures of themselves, and little children learn a little larceny before their ABC's. Addie and Mose' have only each other to fall back on, their friendship is the only glue that keeps them going. Otherwise they're just lost souls, adrift in the Great Depression, trying to get along. "Let's have another cup of coffee, let's have another piece of pie" [goes the jingle], or "it's only a paper moon, sailing over a cardboard sea" sang the radio, as Americans sat beside their floor-standing radio sets, in rapt attention. Is it possible to be honestly nostalgic about a time when things were as difficult and hopeless as mid-Depression America? Was it a better future they imagined, or just a little amusement to pass the time of day? What did Fibber McGee have stored away in that closet?
Posted by Curtis Faville at 7:25 PM

so much of radio came out of (live) Manhattan

I grew up 'watching' radio

my mother grew up in Manhattan (1915-1927 (or so) yes, next door to Fibber Maggie and Molly they were real folk
with their eyes on a better future and a bit of humor

"what evil
lurks in the minds of man?
The Shadow knows...."

"Let us now go to those days of yesteryear. The Lone Ranger Rides Again."

Willard is yet doing weather

both men had terrific "schtick"

Ed used to spin jazz platters on a his radio show... (live)

Willard was the first
Clarabel (The Howdy Doody Show)

came in 3 r in The Howdy Doody Look-alike Contest.. acause I have red hair, freckles and ears that stuck out

I still have my Arvin radio it was my grand mother's

still hums and gets England and WTOP am


sure wish I could find some tubes..

(HEY here is the exact model!)

The look of Bog.'s "Paper Moon" and "Last Picture Show" impresses me--like some old, grainy dust bowl photos brought to life-- but the acting and plot so forth a bit dull, tho' it's been some time since I've watched them. John Ford flicks still have that vibe too, even if a bit cornbally.

I never really got into the writing of that old creep Burroughs, but once he wrote something like, "Hollywood pimped all of our dreams". Bog.'s flicks are part of that Ho-wood machine.