Reading as a Creative Act - An Herbal Knotgarden of Queries 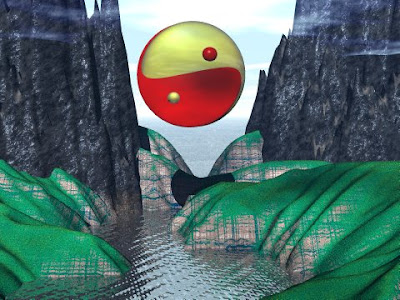 If one could live, say, 200 years, would that be sufficient enough time to read all the books, see all the movies, hear all the music--in order not to feel cheated of the full breadth of living experience? Already, aetat 62, I feel myself scratching off titles I know I'll never get around to. All those ponderous Victorian novels--Dickens, Trollope, Eliot, Thackary, Balzac--I know I'll never get the chance to read. All those narrative poems by Pope, Dryden, Browning, Tennyson & Co. I feel a sad sense of inevitability in this, but how much energy one has left should be spent in mourning? There are hundreds of books we'll never get to, any of us, even if we spend every waking hour at it. Our bodies weren't made for sedentary drudgery, and the less exercise and physical stimulation we get, the less healthy we become.
Computers exert such a powerful pull--vast involutions of data, exchange, matrices of interpolation, dispersal--which seem almost to promise an alternative to live experience--its retarded pace and pathetic capacities. Between television, radio, computers, and the new telephonic devices now swiftly proliferating, it's a wonder any of us finds time to sleep, eat, or just enjoy the day.
Given this overwhelming, and seemingly endless burden of passive obligation--which began back in the age of mechanical print reproduction, gathering steam through the Industrial Revolution, the media explosion of the 20th Century (books, magazines, radios, telephones, phonographs, tape recorders, movies, and personal computers with fax and e.mail, with increasing portability and compression of capacity)--how might the individual mind properly discriminate amongst the welter of information which threatens to bury it in irrelevancy, trivia and pointless diversion.
Is the world more complex, now that we have an increasingly sophisticated means of recording and replaying it, of "storing" its essence in larger and larger repositories of data, than it once had been, before written language, before verbatim, before electronic data storage? Are people smarter, or better informed, than they were before this expansion of the electronic universe of gadgets and "interactive" devices? Or are they dumber, more dependent, less creative and responsible for themselves (and their opinions) than they used to be? Are they more passive, less earnest, and somehow disengaged from reality, as the shadow-land of the internet universe comes more and more to occupy their waking consciousness? Are we becoming somehow psychologically "inverted" from reality, as an involution into fantasy, an alternate reality more "entertaining" than simply living?
Are the reading habits which I've mentioned in my own life becoming more common among people?--i.e., skip-reading, sampling (both random and profiled)? Is the relentless tendency towards abbreviation a sign of impatience with complexity, some sort of new mental short-hand designed to skate over problems and contradictions as if these could be ignored simply by summarizing them with acronyms and trite camp phrases? Is the use of hand-helds and short-text electronic messaging driving us towards an ever-shortening attention-span, defined as what can be said in 10-15 seconds on a tiny keyboard, or the time it takes to punch the television clicker? Is the half-life of the public's fixation on any event or idea no more than the length of a 30 second commercial slot?
What is the sum value of human interaction, if/when reduced to the framing of duration and content, common to devices of limited capacity? There is, apparently, now, a whole generation of kids for whom the daily conceit of identity and relationship is formed out of just such networks of frequent interaction. The first telephonic generation--which lasted between the invention of the telephone by Bell (in 1876)--and the wireless hand-held phone which came into common usage about 2001--was characterized by the romance of elaborated conversation: As party-lines and operators gave way to automated, private land-lines, and privacy and convenience were increased, traditional telephonic communication linked users into an emotional network of confirmation, developed aural relationships, and "brought people closer" than mail or telegrams could. This perception of shared intimacy and familiar human community made the telephone a warm, reassuring presence in households, and brought a significant degree of streamlining and technological authority to the commercial sphere as well.
But the era of e.mail and cell-phones and the new generations of "hand-helds" has usurped this plateau of interconnectedness, proliferating contact at a geometric rate, and rivaling or supplanting ordinary physical interaction with a "remote" connection that erases space and time, replacing them with the immediacy of impulse and emergency ("everything happening at once"). Someone in China climbing a mountain can be in touch with someone lying in bed in Toronto--with an efficiency and ease that undermines the significance of distance, and borders both real and imaginary. Vast regional networks of individuals, tendered "online"--then segue out into the broad band of hand-helds, literally almost instantaneously, transforming the plugged-in human "user" into a cipher on the super-highway of streaming data. "Online" time is meted out in online charges, as usage is perceived as "up" (on the energy grid) as opposed to "down" (unhooked). To be disconnected from this burgeoning vast matrix is a form of exclusion from the circulation of vitality, like a robot whose juice has been pulled.
This new paradigm of electronic dependency is unlike anything dreamed of by Huxley, or Orwell, or the Sci-Fi gurus of the 20th Century. What is its flavor, and where is it taking us? Do the William Gibsons and Neil Gaimans of the old "literature" sphere have anything on the fast-paced technological revolution now taking place?
Perhaps reading, as a form of data sharing and inculcation, will recede in the decades to come. Will literature become a phase, leading to graphic novels and animated programmatization? Will we wear head gear that links us up to cyber spaces and identities which are more powerful than the physical bodies genetics have enabled for us?
Posted by Curtis Faville at 4:34 PM

well
we are reducing things to merely masturbationing.

contact with anything out side of "self" is phantasy


virtual schtick is the rule!

just google what you desire!

what a crock! hardly anybody knows how to use a shovel to dig a latrine... much less knows what a cup of lime is used for...


Doesn’t anyone see around us
this unnatural lethargy, a nation almost
hypnotized into digital complacency,
the loss of all community?
You look out for you. I’ll look out for me.
It’s as though we all agreed at once
to look away.

Don’t you sense a certain general slow
decrease in energy, some kind of
supernatural invisibility?
And so the greedy and ambitious men,
disengaged from this reality,
after twenty-thousand years still
rule the Earth. Still make a mess.

But if no challenge then no consequence,
no task to overcome, reason to proceed,
no victory or success.
Does no one see this debilitating need,
This desire to run away and hide?
Being handed what you want is not a challenge, or finding it or stealing or having lied.

Curtis I hadn't pegged you for a day over 45

lime speeds up the process of decomposing just about everything.

in the back yard

always sprinkle a hand-full of lime over the corpse..

it is added to our food, our soil our asphalt, etc

without lime
we'd be mostly

lime --- our most important
rock

and
it doesn't make the poop slushy...
the urine does that

the lime decomposes the "stuff"
and kills the bacteria

first place to do an archaeological?

find the original outhouse hold and dig there

all "cleaned" and saved by that periodic addition of a scoop of lime..


hey latrine used as a dump! geeze that where the phrase from my pre hippie daze

"Perhaps reading, as a form of data sharing.."

That's part of the picture.

Maybe we're all "dumping" on each other.

But all this data's going to be swept away by the next paradigmatic media grid, whatever it is (becomes).

We're floating on an artificial lake of data, which will quickly be allowed to dry up, once the new system supersedes. But we'll be dead or doddering then, so we won't care.

Technocrats --and finance capitalists, really---approve of the glut of information, and the endless media-overload, I believe. They want to saturate the public with images, brand names, a massive consumer smorgasbord.

Really, it's more dystopian than an Orwell or PK Dick ever imagined: I suspect Google and the like will be running the govt. in a few years, and overseeing some vast corporate police state, with gulags for the poor--that is, if they allow the world to survive.

Texts will have been destroyed and/or converted to e-books, and reading will be confined to approved e-readers, probably at private universities.

Interesting. Maybe a bit over the top, here.

I do think there's been a sustantial shift in the character of corporate power in the last quarter century.

Manufacturing and extractive energy companies once were the ruling centers of political influence, but they seem to be grudgingly giving way to information and communications concerns. China has built its power out of the old model, and there's no clear vision of what will win out. Clearly, we're using up resource at break-neck speed, and as food and energy and space are rapidly exhausted, there will be some terrifying "adjustments" to scarcity. Who will profit off that? I don't know...

It looks that way --then communications corps run the media as well. But you are right--the communication/search engine hustle seems quite odd--really, it's a sophisticated sort of advertising and marketing sca (I'm not too keen on postmodernism, but Google &Co do look...something like Simulacra--).

Yet big Oil did very well under BushCo--. Exxon raked in record profits, as did others. Not real surprising, since Bush /Cheney play golf with oil execs, attend sunday school together, etc.--and that's not only in Texass. Kern county for instance has some very wealthy and powerful oil barons--Occi., Chevron. Cheney generally pays a visit to the Kern oil boys when in CA.

So, commodification still matters. AS does political writing, however futile--or bor-eeng--it may seem to the tea-room-decoration school. Really I prefer like Joanie Didion's bitter yet humorous takes on 60-70s politics over about any beatnik's books you care to mention Well, maybe excepting Terry Southern's black comedy). Or even HS thompson's gonzo however uneven

then
"we"wouldn't bee in this hole!

where would everybody's retirement income come from if "Big Oil" (and the other mega profitable dividend paying "evil" entities
wasn't include in a large % of each fund?

besides every distribution/dividend/interestt sent out quarterly it each stock holder is taxed!

your children most likely have mutual funds families.. (college) funds via your UTMA account that you set up when they were born!

the good ones with a no load and lots of tech, utilities world health financial

over the past shitty 10 years have returned about 3.5 %


of course there are fees..

better to own individual stocks and do the REIT...

stick your $1 under your mattress it s now worth about$0.48 and sinking!

I think that the problem is more with our dysfunctional congress and local leaders and supreme court...

I meant lime in the sense of construction/mud mixture. But you are correct as well.

it's used everywhere and in (just about) everything..

the basis of our mega farms' fertilizer!

LZ's "Chloride of Lime and Charcoal"

I chew charcoal pills to get rid of stomach acid/bloating caused by eating "stuff"
grown in soil that is fertilized with lime!

then gargle with american beer which is rot-gut
from farms that produce wheat, barley, hops grown with pesticides and chicken shit and lime as growth enhancers...

the most poisons/ pesticides/lime in a single food is our
white potatoes!

next is our white/processed flour (bread).

watching The ThinMan... need a martini and spanish olive