As I explained in part in my appended essay "The Text as an Image of Itself" published in Volume IV of The Collected Poems of Larry Eigner [Stanford University Press, 2010], the primary principle in editing Eigner's individual poems, was in reproducing the exact relationships between individual words, lines and stanzas in each separate poem. Eigner thought of his poems as visual designs in space--a poem could shift, or "drift," or zig-zag, or fall, across the "space" of the page.
I think it might be helpful to imagine this concept in terms of a spacial outline, or envelope, or window, within which the shape of each poem is contained. Larry's poems define their own outlines, or envelopes, in space. They push out, and arrange themselves, according to the manner in which they unfold: This involves both visual and aural qualities, timing and orientation. A whole Eigner poem exists within the final form of its setting. The shape of this envelope might be considered as a rectangular box (as I've drawn it below)--

--or as a kind of oblique shape (more like the one below), following the line lengths and groupings of its respective stanzas, words and spacings. It would seem clear enough that the ultimate "size" of the page would relate to the scale of the typeface (in Larry's case, a mechanical given following the traditional construction templates of the manual typewriter). An individual poem's final position within the rectangular dimensions of the typewriter letter sheet, would be dependent upon the conveniences of individual habit. Unless one wished to make a "painting" or a unique holographic document, as such, the process of the setting of an individual poem would not involve a commitment to the typewriter page as having a direct relationship to the final position of the text on the page, or the scale at which it could be replicated, in reproduction. In other words, unless Eigner's original typescripts are regarded purely as ends in themselves, incorporating all their flaws, corrections, errors etc., as implied intentions, then the typescripts must be treated as blueprints, or rough versions, intended--of necessity--to show how the poem exists within its own parameters and internal proportions. This was how Eigner wrote his poems, as free-form compositions, whose ordinations were limited only by the mechanism he employed. 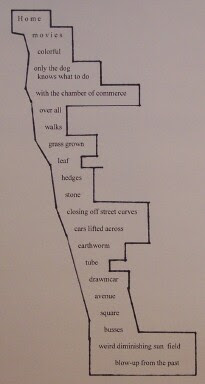 In determining how Eigner's poems might be set, we understood that our first priority was in duplicating the internal relationships--the equivalent spacing of the manual typewriter--as Larry had insisted on every one of his holographic pages. These pages were not intended as guidelines on how the poems should look on a page when finally printed--he never thought of them as finished works in themselves. The amount of space in the two dimensions surrounding each poem varied considerably among the countless expressions of Eigner's work over the five decades of his career. The relationship between the text and its margins may be proportional to a set of given dimensions--books by Larry varied in size, from as small as 2x3 inches, to as large as 15x30 inches. In addition, separate poems were frequently split in half, or multiple poems were often lumped together, several to a page.
There is no evidence to suggest, finally, that Eigner wished that the overall shapes--the envelope or spacial outline of his set poems--were to be positioned precisely as they appear on his original holographs. Neither the corrective annotations and adjustments, nor the organic waywardness of his "journey" across the page, were intended to be slavishly replicated; nor could they be. A poem, for instance, which began at a certain point on the typewriter page, might continue, by accident or simple process of expansion, beyond its given parameters. This does not suggest that Eigner wanted his poems to wander off into empty space (off the page), or that every poem should be centered, or surrounded by a given proportion of blank space, or reproduced on sheets proportional to the given envelope of a single poem.
Larry's primary consideration, when mediating its transition to finished form, was to see, insofar as possible, that it be "fitted" onto a single page; or, failing that, that its internal inter-relationships be preserved across the splice of the page-break. The "whole page" therefore, took on a special meaning for Larry, as a method of preserving the whole spacial intricacy of each single, configured poem, which could best be achieved without interruption.
Realizing the above priorities, our task as editors was:
To preserve the internal relationships of his poems;
To accommodate all the poems in such a way as to allow as many of them as possible to be seen whole, unbroken, on a single page.
In addition, we wanted to establish a template of the dimensions of the page which would make clear where the left margin was, without resorting to a variable, expedient one. There is a natural tension between Larry's formally organic, almost mathematically precise internal adjustments within individual poems, and the exigencies of traditional typographical practice. Any individual Eigner poem might be expressed typographically in any one of a number of possible ways. Establishing a fixed left-hand margin was a way of delineating clearly what the frame of visual reference was; preserving the equivalently set arrangements of the poem, within its overall shape, was the other half of that formula. What this means in practical terms is that nearly all of the poems begin "left" and go some way, in their typical "drift" rightwards, and some of them go all the way to the right margin. Would narrower poems "demand" more space around them, isolated, in the center of the page, than if set to a harder left rule?
There is thus a sequential relationship among the whole series of poems, which over-rides the possible visual expressions of each separate poem. Eigner's work does not suggest a chronological series of formats, tied to the occasions and taste of different typographical or book-making adaptations, but to a single, linear theme. That theme was remarkably consistent, possibly even oppressive in its implications. Like Whitman, Larry increasingly thought of his work, as he aged, as constituting a single arc, all of a piece, unified by approach and method. As he rounded the corner into old age, he could look back with confidence to a consistency of method that never deviated. The poems--in style and approach--look remarkably like each other, separated by decades. Poems written in the early 1950's seem very like those written 40 years later.
Posted by Curtis Faville at 1:09 PM

It's often seemed to me that "open field" poetry is ill-served by the fact of [fixed] page dimensions.

Even worse, the "envelope" or page inevitably changes size and aspect ratio between the poet's typescript (or now "window") and the printed page.

When Ted Berrigan returned the galleys of SO GOING AROUND CITIES, he drew a huge red "X" across one page and scrawled this note:

"This page should look like an aerial view of two city blocks in Manhattan. Only with cars and people."

As you know, my opinion on the margins is different than yours.

Eigner didn't put the paper into his typewriter and start typing at some random someplace on the page, did he?

Except for poems written on "uncoventional" things (and Eigner sometimes did that, as you know, writing on the backs of envelopes, on postcards, etc.), the relation of the furthest words to the left and the left edge of the page must have been a considered decision.

Why did so many magazine and (the better edited) books from Eigner's lifetime start his poems -- compared to poems by others printed by the same editors and publishers -- so far from the left margin, even on pages far smaller than the Stanford edition?

And among the publishers who did that, was you, yes?

Somehow, all those editors and publishers all just happened to willy-nilly set Eigner's poems -- compared to others' poetry -- much further off the left-side page edge?

The Stanford edition has the largest page (8.5 x 11) of any Eigner book and yet it has one of the narrowest left hand margin, and certainly the narrowest proportionally. The Stanford edtion professed to be true to Eigner's poems as he typed them on the page, but obviously focused only on the relation between typed letters and lines, not where those letters and lines appear on the page. To me, that's odd and unfortunate.

That said, please know that I'm reading the books, I love the poems, appreciate the work done to bring them to me, but as I've tried to describe, it's a struggle.

And I love the poems so much, I have also put up
a post gathering comments on Eigner's work by other poet-readers over the decades.

Your feelings about the margins we chose for the collected Eigner are perfectly understandable from a personal aesthetic point of view. In fact, I agree with you: Most of the shorter poems would benefit from having more space in both dimensions, as they were frequently set by various publishers over the years.

But the deduction you've made regarding Larry's intentions regarding the margins is wholly specious, and not supported either by the typescripts, or by anything he ever said regarding the setting of his work. Most of the early work was typed for publication by his Mother. Most of the poems he himself typed followed a format which put his name and address on the upper left hand corner of the sheet, and the address and serial number on the right. He usually started the poem just to the right of the right hand edge of his name and address block, a habit which does not in any way "supprt" a notion about a preferred placement, especially when you consider that many of his poems "run out of space" on the right. One thing that Larry did believe, was that a single poem should be given as much space as it needed to fit onto a single page. What this means is that many of the poems he typed "belong" in a centered position. Also, there's an argument to be made for even larger sheets of paper, which might accommodate an expanded text dimension.

You're also unfamiliar, apparently, with the several limited editions of Larry's which used unusually large paper sizes. I can think of two which were much larger than typewriter letter size, and of course there's the "long sheet" edition of The Music, The Rooms.

Since we chose a single margin concept, we were more or less bound to put it as far left as we could get it, to honor as many of the drifting poems as possible--we probably "saved" as many as 300 poems from going off the page that way. Conceptually, those poems which "use" the whole page are de-facto centered--whereas the shorter (and smaller) the poem, the more confined they may seem (to the left hand side), in our presentation. You have not said so in so many words, but you seem to be advocating a wide margin for all of Larry's poems, an approach which strikes me as completely eccentric and indefensible on practical grounds; can you imagine what such a 2x3 1/2 inch margin would look like ??!!

The consensus, by the way, is running about 10 to 1 in favor of our approach, so I wouldn't assume that your criticism is a predictable one. Also, there are probably as many younger readers, or those unfamiliar with Larry's work in past editions, that they won't sense a disconnect with previous approaches to his texts. He's been dead, after all, for over 13 years, and almost all of his books are out of print.

I appreciate your passion about these things, though I may disagree with you.

in my post above, I mean to say "2 to 3 and one-half inch" left margin--at the end of the fourth paragraph.