Believe You Me Crocodile - Eigner Cummings The Typewriter & A Poem

In my essay "The Text as an Image of Itself" in the Stanford University Press edition of the Collected Poems of Larry Eigner [Edited by Curtis Faville & Robert Grenier, 2010], I reference Larry Eigner's acknowledgment of E. E. Cummings's influence on his work. Crucially, both Cummings and Eigner composed their poems on the typewriter, though for somewhat different purposes. Eigner, who was disabled from birth, was unable to write with sufficient ease longhand, and the typewriter enabled him to compose poems. Cummings, on the other hand, actually preferred the typewriter as a medium, believing that it allowed him to make a visually organized impression. Cummings was both a writer and a plastic artist, and liked to refer to himself as a "draughtsman of words" and an "author of paintings." This sense of composition--conceiving of writing poems as both a visual, as well as an aural process--is a key element of some post-Modern literature, and the work of Eigner presents one of its most direct expressions. Below is an image of Cummings's portable typewriter. In our edition of Eigner's poems, we chose as the frontispiece of volume I, a photo of Eigner's battered old typewriter. The image of this device, at the beginning of the collection, is intended to foreground our apprehension of Larry's work as a poetry which originates, and is expressed through the mechanical characteristics of this handy tool of modern technology, now rapidly becoming extinct since the inception of the computer age, and the personal cathode ray tube projection screen, with connected keyboard and accompanying automatic printer. 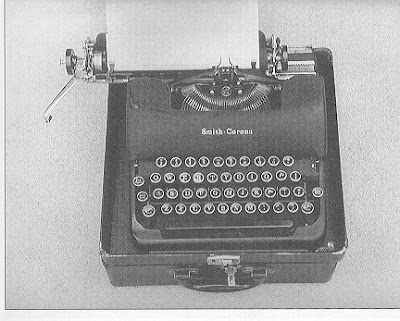 From an historical perspective, the era of the typewriter--assuming that its use is never revived in the future--looks like a transitional device in the development of the mechanization of print technology, mid-way between the invention of the printing press (with later augmentations and efficiencies) and the arrival of the personal computer. The effect of this device upon writers and artists in the 20th Century has been largely ignored, but it's likely to be recognized, going forward, as an important, integral component of the creative process during the segment of its effective life (1900-1995)--just as computer technology is influencing the writing of literature in the present era. Just as the typewriter enabled writers to generate their own print text, without the intermediate step of writing it out longhand or dictating it beforehand, the computer has expanded the capabilities of writers to compose texts visually, using different fonts and spatial arrangements with a great facility, and has brought, too, a capability for rapid reproduction of text, incorporating the data-driven copy machine. We're just beginning to understand how this may affect literature--the generation of material and non-material texts--in the future. 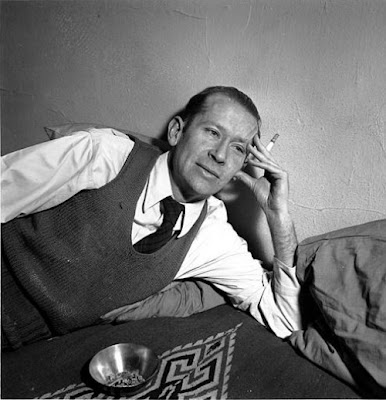 By any measure, E.E. Cummings was a fascinating man. Raised in a cultured milieu--his Father was a Harvard professor and Unitarian minister--Cummings was a precocious child, who began writing and drawing while still in his teens. At Harvard, Estlin (as he was called, to distinguish himself from his Father) graduated cum laude in 1916 with a Master's Degree in English and Classical Studies, delivering a commencement address on "The New Art" in which he noticed important new Modernist trends. A minor controversy ensued. For the rest of his life, Cummings would resist convention, maintaning an iconoclastic profile with respect both to intellectual pretension, and popular opinion.
The familiar account of Cummings's enlistment in the ambulance corps in WWI, his unjust imprisonment, and his book about this, The Enormous Room [1922], are all well-documented. Of more pertinent interest, here, is the incredibly prolific burst of literary production which began after his release, continuing up through the mid-1920's, during which period he wrote over 1000 pages of startlingly original, and unusually skillful poetry (only some of which was published in a sequence of books--Tulips and Chimneys [1923], & [1925], XLI Poems [1925], is 5 [1926], ViVa [1931]). Composed about equally of classically inspired sonnets, and eccentrically set lyrics and satires, it forms a body of work--both in its mood and appearance on the page--unlike anything that had come before in the history of literature.
What Cummings noticed, uniquely, was that the way a poem looked on the page was an integral part of how it was perceived. As a serious plastic artist, he was sensitive to the ways in which a text expressed both our sense of the progression of its unfolding (as read), as well as the overall design and energy of its visual shape. These were revolutionary ideas in 1920, ideas which virtually no one else was exploring at the time.
As a teenager in the early 1960's, I was immediately attracted to Cummings's love poems, which were, and continue to be, among the most direct, frank and romantically lyrical ever written. Their apparent innocence, sense of mischief, and adventurousness were all aspects likely to interest young people, as they have done now for the last four or five generations. The sense of fun--of the "virtual pin-ball" quality of their typographical structure--not only moving words and phrases around on the page, but fussing with punctuation, capitalization, spelling, and grammar--to suggest alternate kinds of address--is irresistible, especially in contrast to the air of gravity and solemnity with which poetry is usually presented in the classroom and on the podium. 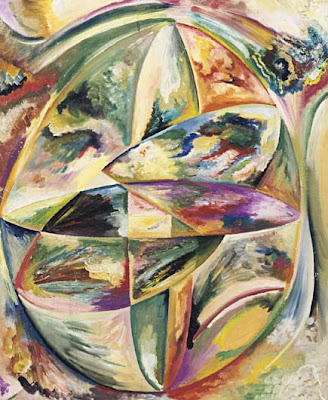 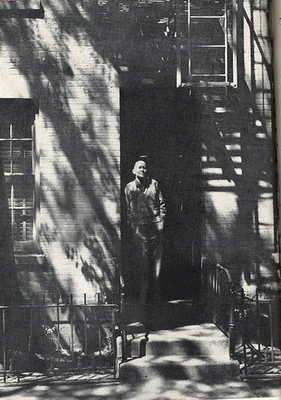 ___________
1. Parodic take on Robert Browning's poem "Home Thoughts From Abroad"--the line "Oh to be in England / Now that April's there."
Painting above by E.E. Cummings, "Fourth Dimensional Abstraction", copyright the Estate of E.E. Cummings.
Posted by Curtis Faville at 6:56 AM

The changes in travel writing relate both to the changes in the locales and the way they're perceived. Burroughs talks about the good old days of Tangier and Kathmandu that have been trampled over by the droves, but there's also the story of how the ubiquitous photographs of Venice have changed the town's significance from the time when Canaletto set up a studio to paint masterpieces that British aristocrats would buy to show their friends what Venice looked like. The Grand Tour crowd was similarly describing what the buildings looked like. cummings' poem is from a sort of Mannerist phase of travel writing when Venice started getting crowded and unoriginal and, perhaps more importantly, you can't get away with saying the same things that Goethe said, culminating in Levi-Strauss' famous Grenierism "I hate travellers and explorers."

Hugh Kenner has a book the Mechanic Muse that I can't locate but as you'd expect (or recall) focuses on Pound and modernism among other things, the history of how the mechanics of putting words down affects poetry, which inspires reflection on the characteristics of the internet.

I liked cummings' plays when I was in the college library but never got to poems like this one (which indeed is quite good).. what I'd read didn't inspire investigating his expansiveness. Two weeks ago I was reading Creeley's comments on cummings ('63 interview in Contexts of Poetry with Charles Tomlinson) which I will type out since they resist being paraphrased.

Tomlinson: do you feel that anything is left from cummings today?

Creeley: No, because Cummings' battle with the typographical set of the poem was one in which, once people were willing to admit typography could be variable and could have a useful effect, the particular value was lost... I like some of his earlier poems very much, both the uses of the sonnet and some of the straight wise-guy poems where you get this beautiful jargon and slang, but I feel that he's always been limited by being a real college boy, by which that his thinking, curiously, has never really gone deeper than the kind of, oh! let's say junior, sophomore, college wit.

.. Perhaps I can't do him so simply as I seem to have done. I certainly feel that his prose is very interesting. The Enormous Room is a classic of its kind, and Eimi, I agree, is a real book. And I was interested, too, in Pound's sense of cummings as being equivalent, in Pound's estimation, to a writer like Catullus. Now, I've never, frankly, felt that the two men ever were -- this is Pound's curiously ambivalent sense of love. That's the only think that I ever think is a generality in Pound: the intensity or substance of love.

Tomlinson: What the age needs is a Catullus, so Pound, out of love, undertakes to supply one?

Creeley: Yes, it certainly does, but I don't think it was cummings.

Tomlinson: (cummings') presence in your work

Creeley: Well, I think one could dispose quite easily of the question of my poems' being like cummings by reference to the sense of audience. I don't have an audience, and this qualifies what I write. My poems are limited, unhappily perhaps, by having to speak in a very single fashion. I don't speak for a generality of people. Now cummings, despite all his insistence on the single identity of the "i," is speaking for almost a class.
________

You can see here the the thought process with which Creeley steered his subject matter away from cummings, and Creeley's seems more the Catullus, perhaps because he subconsciously wants to fulfill Pound's wish for such a poet.

Catullus's acerbic, sardonic diatribes and love-quarrel pieces seem like arch speeches in a forum. There's nothing intimate or sweet about them--all tough-guy bluster and worldly cynicism. That can get old.

Cummings has been on the outs since the mid-1950's, when the New Criticism brought him down a few notches for not being sufficiently intellectual and serious. Cummings was not--strictly speaking--ever an intellectual with pretensions to large, complex concepts and involved ratiocination. He was religious and private, and had been deeply injured in his love relationships as an impressionable youth. After the publication of EIMI, he turned inward, became fairly anti-social, and led a life of spartan seclusion. My guess is that he felt completely alienated from the public art and literature scenes of the Forties and Fifties. Also, according to the biographies, he became frail and vulnerable physically--in his Fifties, doctors found him to have the body of a 75 year old--it's unclear why this occurred; he may have had some kind of auto-immune condition.

All his strengths and weaknesses are evident in his work--he was a very "obvious" poet, not a lot of subtlety. What interests me in the context of Eigner's work, is how his investigations and experiments opened up the territory for further exploration. Like many explorers, he didn't perfect his means. That may have been the task of later practitioners (like Eigner).

Creeley is quite right about the content and "sophomoric wit" of EEC. But nothing anyone can say lessons the effect of that early work--from the early 20's. Unlike some of the most impressive post-War poetry, Cummings's work will live through his readers, even as the critics are calling it naive and adolescent. He really speaks to many people.

I often wish he'd been more serious, too, but he was who he was. His cocky and provocative side often ruins his poems, but it's also the source of his daring inventions. You take the good with the bad.