GIANTS Season off to a BANG !! 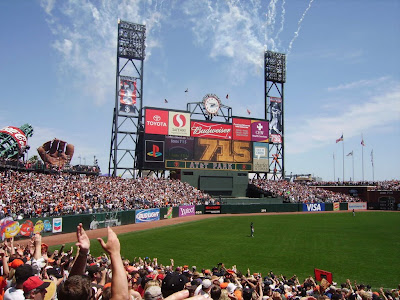 This year--at least for as far back as I can remember--the Giants have gotten off to their best start in years. They led the Spring Training standings for all of baseball, and now they've jumped off to a 7-2 start, with a splendid mix of timely hitting and solid starting pitching.
None of this is a surprise to anyone who has seen the team building itself over the last three years. They nurtured Cain and Lincecum to stardom, at a point in their development when most teams would doubtless have traded one or both of them in order to shore up their flagging offensive power. Since the loss of Bonds after the 2008 season, the team has struggled to find an identity consistent with its eccentric park (China Basin). Even during Bonds' last three seasons with the team, it was clear that a change had already begun, but there were no sparkling prospects in the farm system, or available on the free agent market, to replace him.
As the aging journeymen of the last five years have left, one by one--Durham, Vizquel, Winn, Roberts, Snow, Alfonzo, Feliz, Alou, Aurilia--the team has concentrated on building a cohesive, integrated unit, but without any singular power figures. The best homer totals one might expect would be 20 from Bengie, 30 from Sandoval, 18 from Uribe, and maybe 16 from Rowand. DeRosa and Huff, acquired in the off-season, promise to give more stability in the middle of the line-up, though their power numbers will almost surely suffer given China Basin's empty right field spaces. But given a team ERA in the 3.00 range, it's less important than it would have been back when it was well over 4.00 (in the Schmidt/Rueter/Lowry/Morris era).
As in any given year, the coincidence of good performances by any group of journeymen position players can produce a happy result. Sheer power, or sheer lights-out pitching can put you in the running, but for most champions, secondary players have to rise with the occasion, or the team balance becomes lopsidedly dependent upon two or three star players. Great power teams will win lots of games, but in the end, in the play-offs, it's pitching that makes the difference. The Giants' chances this season rest mainly on the performance of their second-level players: If Sanchez has a great year, and Affeldt repeats as a great set-up man, the pitching should be superior to almost any other team in baseball. If Huff and Renteria and DeRosa and Rowand have great years, then Sandoval and Molina might be enough to produce the necessary runs, especially in close games. With Lincecum and Cain and Sanchez coming at you 1-2-3, the team can believe in its chances every day.  Zito is a key factor in all this, but even if he just breaks even, say, going 12-12 for the year, while the other three are mowing down the opposition, it could be a very entertaining season.
Renteria started off the season hitting .700. There's no doubt that he's not star material any more, but if he could only hit .275 with 12 homes and 75 RBI's, the line-up could present interesting problems for opposing managers. Uribe and Rowand are both streak hitters; if they could stay hot for a whole season, it would make a huge difference. If Bengie can curb his natural gullibility and impulsiveness, he might break 100 RBI's for the first time in his career.
Philadelphia and Colorado still look like the power teams. The only question is their pitching. Can the Phillies consistently score 5+ runs per game? Quite probably. Can Colorado? Yes, but in both cases, that may not be enough. In a 5 or 7 game play-off, a power-based team can hit a bad patch and be neutralized.
I think our chances this year look the best they've been since 2005, or five years ago. The wheel turns, and the odds adjust. I don't know what Las Vegas is saying about the Giants this year, but you can't count them out, especially given the evidence of their quick start.
Posted by Curtis Faville at 11:31 AM

Dodgers will be back, pronto, with Mannywood and the rest, and Don Torres in command (I'm not much of a fan of MR or any overpriced egotistic ball players, but MR 's a true slugger).

They're experiencing something like post-partum depression due to the McCourt scandal. Nearly took D-backs last night but wussed in 11 innings.

Giants...eh. Haven't been a FogTown fan since like Matt Williams and Clark and the rest took the field

I haven't watched baseball since about 1967 when the Phillies still had Johnny Callison.

When I watch a sport, I watch only FSW -- which is Fox Soccer World, I think is the acronym.

They have marvelous teams from Spain, and Croatia, and English teams. The level of play is astonishing.

Last night my kindergartner got his first goal.

I think that soccer will eventually take over the American sports world, and things like baseball will become historic, as we join in the multicultural aspects of the world soccer federation.

Will anything be lost by this?