Jack Gilbert - It's Later Than You Think [Part III] 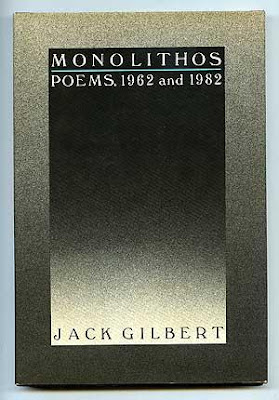 In 1982, after a hiatus lasting fully 20 years, in which he had been living for the most part abroad, mostly in Greece, Jack Gilbert broke his aesthetic fast and published his second collection of verse, Monolithos. Poems 1962 and 1982 [Knopf].
Imagine what the effect would be if your poems could only survive as fragments, moth-eaten papyri stashed in caves and forgotten for a thousand years in an arid, sparsely settled land. Would you be content to let half your lines--say, the left half--exist as testaments to the partial content of your assertions, to the sum of your sentiments? Are your poems as full enough of what you most wish to endure, over time, that what would survive would be somehow sufficient to your purposes?
But our lives and our poems are like different versions of the shadows of our selves. Who knows what Sappho looked like, what she liked to eat for breakfast, or what color of skin appealed to her? Perhaps it isn't important that we know--certainly we never shall--only that the quality of feeling she was able to transmit, much in fragmentary shards, is apprehensible to us, across the barriers of time, language, context, and material surface.
THE CUCUMBERS OF PRAXILLA OF SICYON
What is the best we leave behind?
Certainly love and form and ourselves.
Surely those. But it is the mornings
that are hard to relinquish, and music
and cucumbers. Rain on trees, empty
piazzas in small towns flooded with sun.
What we are busy with doesn't make us
groan ah! ah! as we will for the nights
and the cucumbers. 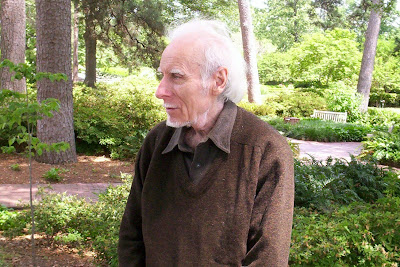 If we could decide which part of ourselves we wanted others to know of, which part would it be? Our humor, our fidelity, our joy, our misfortune, our sins, our failures? Would we be satisfied if the truth could be known, if our poems could convey who we truly are, instead of who we maybe wished we had been, or could be? Or would we be content merely to know that in writing our poems, we had reached a place in our knowledge that would otherwise have been withheld from us, had we not engaged life with words, in the hope of discovering what really mattered, what might sustain us in moments of crisis?
In the movie Zorba the Greek [1964], the actor Anthony Quinn tells his English friend Basil that he dances, spontaneously, at moments in his life of greatest intensity, whether out of intense joy or intense grief (such as the death of one's child). His dancing is a sublimation, a purgative and purification of the soul.
Gilbert lived for some years on the island of Paros, in the Cyclades. Though a tourist destination, it remains largely unspoiled, somewhat rigorously rustic. Clearly, for Gilbert, it signified a setting in which he might test the oppositional tendencies of his nature, against the hard Mediterranean light, the unyielding white stone, the intense blue of the sky and sea, the slower pace of an unmechanized, still-primitive folk culture. The clarification afforded him a release from cosmopolitan distraction(s), the blandishments and nuisance of media--allowing him to focus on food, love, exertion, blocks of time and space for meditation and the writing of poems. Poems which proceeded by increments of uncertainty, changes of heart, rueful, reluctant admissions, cries of splendour and agony. Conducted like quiet conversations after love-making, difficult disagreements, awe-inspiring music--moments, in short, in which a relaxation of inhibition, or inspiration spurred by profound impression, released the mind from habit and familiarity into a space of disclosure and permission: Poems, in short, that mattered.
THE REVOLUTION
Robinson Crusoe breaks a plate on his way out,
and hesitates over the pieces. The ship begins
to sink as he sweeps them up. Sets the table
and stands looking at history for the last time.
Knowing precision will leak from him,
however well he learns the weather or vegetation,
and despite the cunning of his hands.
His mind can survive only among the furniture.
Amid the primary colors of the island, he will
become a fine thing, perhaps, but a different one. 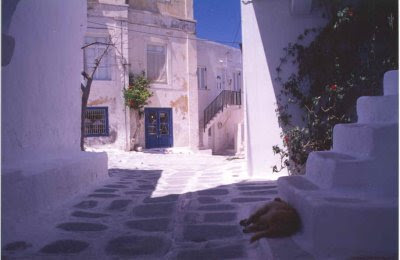 If we watch ourselves thinking, too carefully, we may miss something that passed, as swiftly as a hummingbird, just there along the top edge of the hedge-row. The harder we try to solve the momentary conundrum, the less likely we are to see the elusive flutter, the hidden clue. A bird in the hand is a poem to the mind. And the hand is empty.
SINGING IN MY DIFFICULT MOUNTAINS
Helot for what time there is
in the baptist hegemony of death.
For what time there is summer,
island, cornice. Weeping
and singing of what declines
into the earth. But of having,
not of not having. What abounds.
Amazed morning after morning
by the yielding. What times there are.
My fine house that love is.
Posted by Curtis Faville at 8:26 AM

"Amid the primary colors of the island, he will
become a fine thing, perhaps, but a different one."

the colors (of the islands and their towns) are Blue and White and of stone .

every year places like Mykynos and Lindos,
the stone walls are refreshed with new white-wash. of course, the sky, the Aegean are a certain Blue... always
and the mountain to go down from to fish and catch
are colors in the Greek flag/mind

Maybe not a prince, but a hell of a poet.


He uses relies on the passive so much, however, like many "confessional" p**ts--"is" izz not so p**tic--colloquializes things (...re-write in active voice with strong verbs, mr Gilbert, for a higher grade...)--izz also presents...logical difficulties (the izz of predication is not the izz of identity...trip on dat Ed-Bee)

He would have been better served reading

Jack Gilbert is a rare poet of economy and passion, of the tightening of the bud equal to the unfolding. There are so many excellent Gilbert poems one does not know where to begin but I return again and again and begin with "The Abnormal Is Not Courage". Thank you for your three-part postings.

jack is a dozen years older than me but when i knew him i was in my 30's and in lawrence fixel's living room we met with laura ulewicz, ray carver, morton marcus, nanos valaoritis, shirley kaufman, leonart bruce, josephine miles sometimes (and once harold norse --what a mess that confrontation w/jack was). jack was so swell with me. and later i spent so much time with michiko and before that others. jack was a mix: one time he and i drove down to palo alto in a car borrowed i think from ruth witt-diamant and my mom was with us --going down to her place in mountain view-- and he spoke of his mom (who supported jack on her senior pittance from pittsburg, as harold norse's mom did from her new york jobs cleaning offices)and heard jack refer to his mom objectively as a peasant. a peasant. i still think of that and of my mother hearing it and i wonder if she thought i felt about her that way. no. i thought then that jack is an ass maybe but he will never again be my friend. i thought "my mother is not a sub human. nor is yours. maybe you are." i knew laura ulewicz pretty well. knew about her when i lived in london for a time from the book of hers and her reputation there before she move back to the usa to san francisco where she worked with 'the diggers' in the haight and had her own "i thou" coffee shop. i met her at lawrence fixel's place on parnassus heights on high willard street where i met jack and shirley and nanos, and ray and maryanne, and so many more now drifting into the fogs. i love the jack who was so swell. but not the one who was elevated. not the wone who lived creating the myth of the self and the myth of "he marriage that failed" --the marriage failed, not the lovers. oh the enfeciated mind! the loss of humanity that was there to accompany the great and greatly narrow gift.