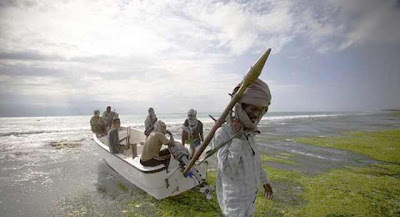 Each new international "incident" around the globe continues to remind us how ineffectual and impotent the United Nations has become, in addressing regional or international conflicts. Piracy on the high seas--it almost sounds like a phrase from an historical novel about the 19th Century!--has once again become a very real issue, with the growth of international hijacking for ransom, originating from Somalia, on the East African horn Gulf of Aden. For the last 3 years or so, attempts to organize various individual nations or groups of nations to set up a policing force to prevent the illegal interception and capture of shipping vessels passing by in international waters, has so far failed to prevent these attacks from occurring.
There has grown up a whole industry--virtual private navies--within Somalia to pursue this illegal activity. Somalia, as a nation, is in a state of chaos, with little or no reliable rule of law or enforcement, to prevent these piracies from flourishing.
Pirates in small gunboats simply approach these huge craft, start firing on her crews, and board them and take control, holding them for ransoms from the controlling companies (and their insurance carriers). The ships are powerless to prevent these incursions, since their crews are unarmed, and only trained and authorized to run them, not to defend against attacks.
Given the modest size of the pirates' modus, it would seem obvious that the simplest way to fend off this kind of approach would be to maintain an armed presence on board commercial vessels which must skirt this geographical area on their intended routes. Apparently, this is not feasible, perhaps given the number and variety of vessels traveling in this area, or for other reasons (cost, or liability?).
Failing that, it would seem that a deliberate raid on the shore facilities of the pirates in Somalia could certainly be considered, even at the risk of violating Somalia's sovereign territory. A strategic--"surgical"--strike against these organized international criminals would seem to be a straightforward possible solution, and would effectively render them harmless. It's not as if we were dealing with an organized military; these are small bands of thugs, who, faced with an organized policing force, would be unlikely to put up much resistance. It wouldn't solve the underlying causes of their criminality, but it would put an end to the immediate problem. Why hasn't this simply been carried out?
Surely there must be an obvious reason. Maybe we aren't being told the whole story.
Posted by Curtis Faville at 10:28 AM

Even the French have shown more spine against the somalia...chandala. Really, I suspect it's some radical chic thing (and I say that as one who has never been in the GOP, or pal'ed around neo-cons, unlike say Ed B., one of Olson's cronies).

Take 'em out. Jefferson would