As a reader and writer of poetry, I'm not much interested in prizes and awards. The poet Philip Levine seems to have won almost all the prizes that a poet can hope for in this country. The Pulitzer, the National Book Award, and many little awards and grants and acknowledgments along the way. I've never been impressed by these kinds of laurels, except when they're given to someone whose work I've always thought deserved more recognition than it's been given. Americans like underdogs. Rae Armantrout, I like to think, was an underdog, but if a writer's good enough, eventually they'll be discovered and revered as they deserve to be. This doesn't always happen in American culture. We're a capitalist society. Self-promotion and attention-getting efforts will often succeed in raising the level of one's reputation to a higher level than is perhaps deserved. I've never thought that the writing of poetry is a social phenomenon; it's basically a solitary act, and despite its very modest social or professional dimension (readings, teaching), it's still about what you do when you're alone at the desk, thinking and making poems. 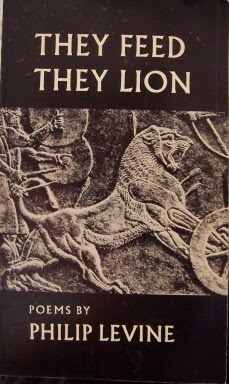 Philip Levine began his career as a devoted academic writer. He makes a big to-do about growing up in Detroit, working in an automobile factory. Proletarian, working-class preoccupations play a big part in the subject matter of his poems. But you get the feeling that this is just special pleading; Levine has fed off the academy nearly all his adult life. Writing about production-line auto workers for half a century, while teaching poetry workshops and giving readings to academic audiences strikes me as somewhat disingenuous. If Levine "escaped" from a working-class life, that escape shouldn't involve a life-long commitment to exploiting the poetic possibilities of the details of that working-class existence; which strikes me as a kind of fake romantic nostalgia for a 'Thirties social conscience. It doesn't ring true. In addition, he's written a good deal about Spain, where he's spent time, and often employs a sentimental attitude towards Spanish society. There's often a kind of familiar tough-guy-I've-shared-the-burden attitudinizing which I find tiresome. If you've spent the better part of your whole life in relative comfort, living within the American university system, drawing a nice pension, and being lionized by your peers, pretending this pity and hand-wringing concern over the poor and politically oppressed can get a little old.
Despite this, Levine is a very good poet, and his work has improved over time. Beginning as a student of Lowell and Berryman, and later of Yvor Winters (at Stanford), he eventually developed a stripped-down, short-line style which has suited his purposes very well. Ultimately, complaining (as I've done) about a poet's subject-matter isn't the relevant criticism. As the example of Stevens and Pound and Moore and Eliot showed, it isn't what you're saying that matters, it's how you go about saying it. Formally, Levine isn't an experimenter, but he has managed to strip away unnecessary frippery, to deal directly with impressions and feelings which have continued to interest him, throughout his career.
When the collection They Feed They Lion was published, in 1972 [New York: Atheneum], I was surprised by many of the poems in it. The tone of many of the poems was sharper, better than I would have expected, given his beginnings. I especially was impressed by the title poem, which I quote here in full:
They Feed They Lion
Out of burlap sacks, out of bearing butter,
Out of black bean and wet slate bread,
Out of the acids of rage, the candor of tar,
Out of creosote, gasoline, drive shafts, wooden dollies,
They Lion grow.
Out of the gray hills
Of industrial barns, out of rain, out of bus ride,
West Virginia to Kiss My Ass, out of buried aunties,
Mothers hardening like pounded stumps, out of stumps,
Out of the bones' need to sharpen and the muscles' to stretch,
They Lion grow.
Earth is eating trees, fence posts,
Gutted cars, earth is calling in her little ones,
"Come home, Come home!" From pig balls,
From the ferocity of pig driven to holiness,
From the furred ear and the full jowl come
The repose of the hung belly, from the purpose
They Lion grow.
From the sweet glues of the trotters
Come the sweet kinks of the fist, from the full flower
Of the hams the thorax of caves,
From "Bow Down" come "Rise Up,"
Come they Lion from the reeds of shovels,
The grained arm that pulls the hands,
They Lion grow.
From my five arms and all my hands,
From all my white sins forgiven, they feed,
From my car passing under the stars,
They Lion, from my children inherit,
From the oak turned to a wall, they Lion,
From they sack and they belly opened
And all that was hidden burning on the oil-stained earth
They feed they Lion and he comes.
The poem is a kind of chant, or litany of images and details, a cornucopia of ugly, sad, repulsive matter. Though derived ostensibly from a modern waste land setting, the poem also has a primtivistic feel, evoking the ancient animus of the carnivore, the Lion, to represent both the threat of the natural world, and the demons of greed and exploitation as exemplified by industrial development and capital. Some critics have found in the poem a parallel thematic content to Yeats's poem Second Coming, a connection which seems all too obvious and gratuitous to me. But Levine clearly wants the poem to have this kind of mythic quality, and I think he succeeds in raising the ante, both through the vividness of his imagery, and the hypnotic quality of his phraseology. "Feeding the beast" of exploitation only makes it stronger, more irresistible. We are drawn into this feeding frenzy not only by our hunger and need, but by the excitement and hysteria of the hunt, the ceremonial pomp of the slaughter and the feast.
Ultimately, we summon the beast of retribution, or of desolation, and we are absolved through our own sacrifice to a primitive god-head: We are devoured, our entrails spilled out, our liberal pretensions right along with our selfishness and sensual luxuries, all consumed.
At least to some degree, the poem transcends Levine's usual proletarian sympathies to achieve a higher level of meaning. Signally, it's written in a style which is not typical of him. It's almost a pointlessly forsaken poem, its anger and pity earned and purified by the relinquishing of self to the larger implications of general guilt. In American society, we can all lay claim to our own share of greed and desire and bloody hunger.
Posted by Curtis Faville at 6:02 AM

Levine's jazz I tried reading, years ago. I don't know. Poet Im not, and really can't think of any poetizing that really moves me. Once I thought I enjoyed some of Frost's verse. Not sure anymore. (Rilke. perhaps. At least sort of ...evocative, muzickal) Levine didn't change that opinion. Tame

Saroyan, that creepy romantic genius had an eye for central valley absurdities, for the sweltering farmland, orchards, immigrants, hicks, ho's. As did Steinbeck, really, even if raw. Ive yet to read any "poets" that do.