The Limits of Abstraction - the Orient Eye

There are various ways of talking about abstraction. Abstraction is an interesting word. Applied to the plastic arts, it usually means any design or artifact which does not specifically represent a known object or image of some previously existing form. In other words, it rationalizes form. Abstraction may be a derivation of a known form, or it may bear no apparent relation to any known form.
Painters used to have short-hand critical tools for talking about the organization of space within a rectangular canvas. The so-called "Rule of Thirds" describes the organization of masses of shape within a rectangle, measuring the effect(iveness) of a composition by how well the shapes (masses) are distributed among the nine sub-rectangles created by the imposition of a tic-tac-toe grid of four equally placed dividing lines. Do theoretical propositions about the distribution of masses and voids within a given limit give us a meaningful handle on how works of art effect us mentally, emotionally? Perhaps. To what degree are such "rules" self-fulfilling propositions? Another famous handle is the "triangle of light" notion--once applied to photographic imagery. Triangles of light create interest through the inherent imbalance of three end-points, a tension that is unresolved to the perceiving eye, and hence more hypnotically intriguing. Such rules are interesting, but rationally indeterminate.
The images below are made from the same negative. Heaped up "dunes" of sand are classic photographic subject-matter, because they make such wonderful abstractions of light and dark, shade and shape. The sensuality of shifting masses of particles held in mild brief stasis by gravity, consistently altered (moved) by the action of wind. What is the "meaning" of dune imagery? What kinds of visual principles of organization can we apply with any certitude to these varying scallops, scoops, louvres, plaits, slopes, creamy ridges, gaunt seams, sweeping crests, cones and crevasses? What do shapes mean? 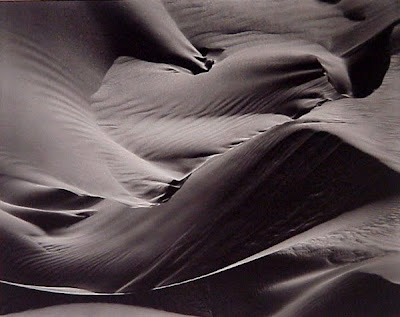 We can assign programmatic meanings to abstractions, "humanizing" or rationalizing their potential interpretation, but we know this is an application, rather than an inherent measure of their significance. Human is to human as...the tautology seems obvious.
This image is one of Brett Weston's more effective, and well known, abstract dune images. During his long career, he made many of these, beginning in the 1930's, at Oceano Dunes, then later at White Sands, New Mexico in the 1940's, and in the ensuing decades. He called many of his abstractions "elegant gorp"--stuff or surfaces that his camera's lens liked: Broken auto glass, warped screens, ice, mud, smashed metal, rock fractures, etc. Dunes are one of the best instances of "found" subject matter occurring naturally in the world. Unaffected by the hand of man, they're perfect, pristine, uncluttered piles of matter, artistically arranged for our visual delectation. 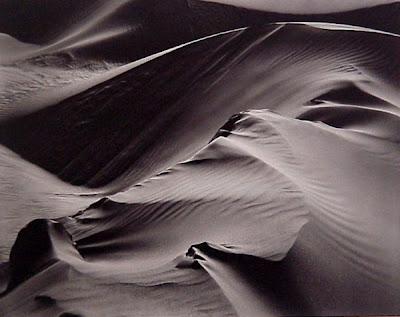 One of these images is shown right-side-up, and the other is upside down. It's pretty easy, once you know the riddle. But people looking only at the one on top, without the reference of its correct orientation, might not pick that up so easily. Brett often delighted in confusing the viewer by displaying an abstraction from nature upside down, creating a quandary for the eye.
Which of the images is "correct"? What does the apparent "logical" organization of light and shade tell us about our perception of space? The mind grasps at "keys" to sense orientation. An illogical queue tells the mind that something is awry. An upside down smiling mouth may look peculiar for a second, but we realize quickly what's going on. But with abstraction, this isn't as easy.
Abstract expressionism depends to a significant degree on the effect which subliminal queues create in the mind. Rothko's color field images depend upon the "feeling" certain colors, and groups of colors create in our consciousness. Franz Kline's two-toned arrangements create tension between certain linear relationships in space, without specifying any structural reference. Late Sam Francis images of bubble-like blue and red spheres inspire a release into a floating, synthetic firmament.
Which version of Weston's dune do you like best? Do you prefer to have both, or just one. Is it proper to offer an upside down variation of a design which is already fascinating enough, already, without exploiting it further through an artificial manipulation? The choice is yours.
Posted by Curtis Faville at 10:04 AM

visual abstractions entertain for a bit, but....really seem a bit dull in this day of hyper-animations, fractal geometry and IMAX spectacles. But they're still profitable. To me, a Rothko looks fairly mundane, some bright colors with vague religious connotations. To the collectors those connotations go for a few million shekels.,..

Music on the other hand remains the supreme abstract Ahht, ah believe. As with Chopin's best music...nearly pure sound, perhaps a few slightly programmatic sections, but on the whole a shimmering architecture...of course, great musicians from Bach to ..Bartok evoke that sense, but Chopin sort of ...smashed in the older, churchy-hymn sounds AND the usual ...mozarty-operatic BS as well. Yet you can get a copy of some unknown maestro playing Chopin's etudes for five bucks, unlike. Rothko or Kline will cost you a hundred thousand. With J-Praxis, we keep a few authentic Chopins. Alas Rothko and pals (and probably Zukofskys as well) will be working the harvest with los campesinos....