Sometime in the late 1980's, back in the days when records were still being sold--though soon to be supplanted by the cassette tapes of that transitional era--I bought the Sinatra Silver Mobile Fidelity limited boxed set of 16 mint LP's for my wife for her birthday. Her Mother had idolized The Voice since her bobby-soxer days in Denver during the late 1940's, and had tracked Old Blue Eyes's career through the 1950's and 1960's, until his voice (and popularity) finally gave out after 25 years on the pop charts. M inherited her mom's infatuation, and why not? Emerging from under the protective wing of a Swing Band leader, Frank reached his maturity just as Nelson Riddle entered the scene as master arranger, and the collaboration that ensued created recording history, in a string of incomparable albums that set the standard for torchy style crooning that still stands today. It's possible not to like the sound of Sinatra's voice, but it's hardly possible not to appreciate the control, the phrasing, and the perfectly coordinated orchestrations backing him up. 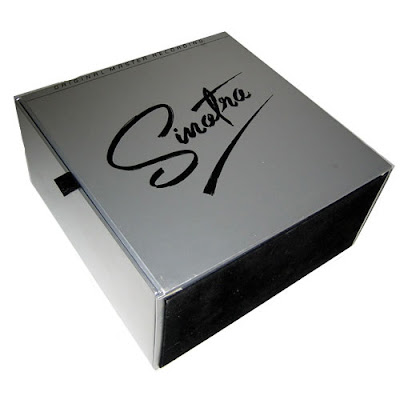 Recently, I read a short biography of Sinatra, Why Sinatra Matters, by Pete Hamill.1 An unabashed fan, Hamill lays out the usual bare facts of Sinatra's troubled private/public life, and finds excuses for all of his excesses. But, as Hamill argues, the value of the musical legacy transcends ephemeral concerns about Frank's connections, his behavior, his flawed vision of himself and his place in the world of entertainment.
Largely uneducated, Sinatra clawed his way up in the musical world of the early 1940's, and managed to outlive and move beyond the first opportunities and styles that were tailored to the Swing Era, and his youthful crooner's sound. By the early 1950's, his voice had matured. Despite being a heavy drinker and a smoker, his rich tonal range and exquisite enunciations and phrasing defined the limits of the male singing persona, and he was able to fashion a musical projection that incorporated the disappointments and attitudes which drove his personal biography. Few artists are able to do this, especially to their advantage, and in so doing, Sinatra entered the public's fantasy world, and became a personification of the role of the loser/winner, fighting back failure and self-doubt to triumph on his own terms.
Thinking about Sinatra's slight physique, his peremptory, often blustery bearing, both in private, and with the Press, it's hard sometimes to conceive of him as heroic, but his whole approach to singing was built on that formula, and if you can't appreciate that aspect of his art, you probably won't respond to his music. I was never a fan of his early teen style, the long, soft notes held, the moony, silky sound he cultivated with Dorsey. Like most people in their Sixties or older, I think of him in his prime, during the 1950's (Capital Records period), and those knock-out ballads, lonely and sometimes despairing. I disliked the later work, with the harsh "Las Vegas" band arrangements, the whole "I did it my way" phenomenon.
His renditions of A Foggy Day, I Get a Kick Out of You, In the Wee Small Hours, Violets For Your Furs, I'll Be Around, The Lady Is a Tramp, Fly Me To the Moon, Young at Heart, Chicago, and three dozen others, are among my favorites; they seem limited only by the flaws in the writing itself. Sinatra could bring out the best in many different kinds of musical moods, but he was the master of the down-&-almost out heart-break lament. 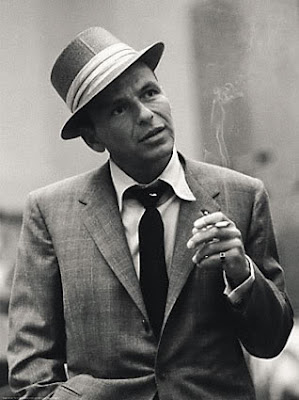 As an actor, Sinatra had no formal training, and his only qualified performance in From Here to Eternity [1953, for which he won his Oscar] was followed by a string of stinkers. Aside from On the Town [1949], Guys and Dolls [1955], The Man With the Golden Arm [1955], High Society [1956], and The Manchurian Candidate [1962], it's forgettable stuff. Still, putting two serious careers together during that decade of the 50's was an astonishing feat, and lent credence to the myth of his legendary energies, and his seemingly unlimited, essentially intuitive, aptitudes as an entertainer.
Sinatra's romantic escapades, and shady "Mafia" associations, would have brought a man of lesser charisma down in a hurry, but he survived these encounters, which became a part of his reputation as surely as his professional exploits did. It's odd to think of him in the same breath as his later contemporaries, the Rock & Roll stars of the 1950's, '60's and '70's. Changing musical tastes tended to make him, and his dated style, seem quite old-fashioned, but his core audience (which was never divided along sexual lines) never abandoned him, and his career declined in proportion to the numbers of fans who had survived those decades with their memories (of his earlier days) and their sensibilities intact.
Is it still possible to listen to the Capital recordings, preserved in the technically impressive Mobile Fidelity album omnibus, without feeling as if you're in a time warp? Probably not. The birth of "pop" which accompanied the advance of popular media (radio, TV, phonograph) in the 20th Century, has as much integrity as any folk or art song from the 19th Century, even when it may seem "unserious" in its intentions. As a jazz singer, Sinatra was among the very best, seizing what he needed from other innovators, and bringing a special sexy, jaunty, devil-may-care tenderness to each carefully constructed performance.
We won't see his like again.
Here are links to the Mobile Discography list, and the NY Times review of the package in the year of its release. The box was later reissued, very little changed for content, as a set of CD's, but the sound range lacks a basic "etched" quality which the needle in the groove makes. I've often thought this edgy quality isn't something that will ever be quite reproducible in any other medium, though technology may in due course solve it.  In the meantime, like they say, there's the box, copies of which can still be had on the used and rare market. It originally sold for $350 a set, but it may cost a lot more now.
____________
1. Here's a long quotation from Hamill's introduction to the book: "This book does not pretend to be the final word on Frank Sinatra. Several full-scale biographies have already been written, each with its attendant excellencies; more are sure to follow. But there were aspects of this man that should be remembered and honored. In Sinatra's time, his fame as a singer spread from his own country to the world. His turbulent personality, often shadowed by notoriety, seemed inseparable from the style and originality of his art and gave him an essential place on the public stage of the American century. Now Sinatra is gone, taking with him all his anger, cruelty, generosity, and personal style. The music remains. In times to come, that music will continue to matter, whatever happens to our evolving popular culture. The world of my grandchildren will not listen to Sinatra in the way four generations of Americans have listened to him. But high art always survives. Long after his death, Charlie Parker still plays his version of the urban blues. Billie Holiday still whispers her anguish. Mozart still erupts in joy. Every day, in cities and towns all over the planet, someone discovers them for the first time and finds in their art that mysterious quality that makes the listener more human. In their work all great artists help transcend the solitude of individuals; they relieve the ache of loneliness; they supply a partial response to the urging of writer E. M. Forster: "Only connect." In their ultimate triumph over the banality of death, such artists continue to matter. So will Frank Sinatra." [Little, Brown, 1998]
Posted by Curtis Faville at 8:42 PM

I enjoy some of Sinatra's 50s music, and he had some talented musicians as support--Nelson Riddle, for one (arranger on much of the Fly me to the Moon, Got your under my skin, type material....or that noir classic, Angel Eyes...).

That doesn't negate the fact that Sinatra had mafia connections-- they are pretty well documented--or for that matter his political connections, like to JFK, and Reagan.

Anyone who kicked it with Sam Giancana and his paysanos, or other vegas mobsters--well, you got some bad joss to deal with (even if it's just historical reputation at this stage). Sinatra's marriage to Zeppo's old ..schicksa strikes me as a bit curious..and odd.. as well (and Franks' kids hated her from the start). fuggetaboutit