For Giants fans, the future is finally now again. Since the move to San Francisco, in 1958, the team has only reached the World Series three times previously (in 52 years), losing each time. I remember the last one: We were eating out with a colleague in San Francisco in 2002, when we heard that the Giants (leading the series 3 games to 2), were leading in game six against the Angels (in Anaheim), 5 to nothing, in the top of the seventh inning. We set about our repast, confident that the long drought appeared to be ending. But the Angels scored six runs in the last two innings, forcing a game seven, which ended in defeat, once again. 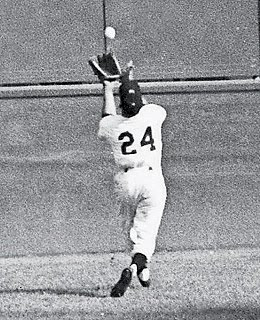 Willie Mays' miracle catch in the 1954 World Series at the Polo Grounds
This year's Giants team, who are the National League champions, is an odd rag-tag group, cobbled together out of cast-off free-agents and mid-season pick-ups. Here's the 2010 opening day line-up:
1 CF Aaron Rowand
2 SS Edgar Renteria
3 3B Pablo Sandoval
4 1B Aubrey Huff
5 LF Mark DeRosa
6 C Bengie Molina
7 RF John Bowker
8 2B Juan Uribe
9 P Tim Lincecum
Compare this to the probable World Series line-up for this evening:
1 CF Andres Torres
2 2B Freddy Sanchez
3 1B Aubrey Huff
4 C Buster Posey
5 LF Pat Burrell
6 RF Cody Ross
7 3B Pablo Sandoval
8 SS Juan Uribe
9 P Tim Lincecum
Posey, Burrell and Ross weren't even with the team at the beginning of the year! Freddy Sanchez was still nursing a serious injury, Andres Torres was the back-up Center Fielder (behind Aaron Rowand), Juan Uribe was the "utility man" behind Renteria, DeRosa went down with what is probably career-ending wrist surgery, and, to top it off, there were holes in our middle relief.
Despite this, our starting and closing pitching looked top-notch, which proved largely to be the case. Rowand, Sandoval and Renteria had off-years, but Torres, Burrell and Ross arrived out of nowhere. Bengie Molina, the team's inspirational leader, and the veteran catcher who did much to anchor the pitching staff, became expendable in mid-season, with the arrival of the phenom Posey, and was traded to Texas. He'll be facing his old team in the Series, a strange home-coming indeed!
How could a team built out of spare parts and has-beens, with just a couple of stars (Lincecum, Wilson), compete against a powerhouse like Philadelphia, with its big-time sluggers and slingers? The answer, as all the prognosticators have averred, is pitching. A great starting rotation is the best answer to a power line-up, and that's what happened in the 2010 NLCS. Howard and Werth, Utley and Ibanez and Victorino were effectively neutralized by San Francisco's overall pitching superiority. Improbably, through September, the Giants had lived on the home run; and despite a comparatively weak offense, without speed, without clutch hitting, playing in a "difficult" ballpark hostile to left-handed sluggers, it had somehow managed to consistently outscore its opponents.
What was it that the old Orioles Manager Earl Weaver used to say?, "give me good pitching and three-run homers."
Going into the NLCS against the Phils, the smart money was on Howard & Company, but the smarter money wasn't buying it. The City of Brotherly Love, it also turns out, is really The City of Sibling Rivalry, as Philadelphia fans booed with frustrated, boorish incivility at the conclusion of the Giants' win in game 6. It was even reported in the media that treacherous home-townies had attempted (unsuccessfully) to pay a waitress to lace a table of Giants' players' dishes with Ex-Lax. Not funny, McGee. Some people will do anything to win. Should we test Ryan Howard and Chase Utley for steroids? And Utley's sophomoric little toss of the baseball back to Sanchez in the second inning of game 6. . .it reminded me of the ultimate game 4 of the 1975 NBA Finals when Washington Bullets forward Mike Riordan took an unprovoked, premeditated slug from behind at Rick Barry as he was driving to the basket, in an attempt to incite a brawl and get the Warriors' star ejected. Dirty little tricks like Utley's have no place in professional athletics--and if I were commissioner I'd fine the S-O-B 25 thousand for it. Definitely bush league stuff. 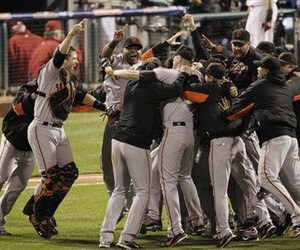 So what are my feelings and projections for the Series? As with the NLCS, I think it's imprudent to predict the impossible, but the Giants and Rangers match up well. Both have good starting pitching, which, as we've seen, can skew outcomes. I would have picked the Phillies in 5 if I'd had to bet before the NLCS, not a loyal boast, but an acknowledgment of realities. If the Phillies and Giants played each other 25 times, I'd expect the Phillies to win at least 15, or 60% of the time. But in a short series....
Actually, I don't know that much about this Rangers team. I do remember that George W. Bush worked in the back office for a while, which couldn't have helped the team much. Georgie was still in his shiftless jerk phase in those days--years during which the team was mired in mediocrity. Statistically, they're a nice mix of power and speed, with decent starting pitching. The acquisition of Cliff Lee from the Seattle Mariners in mid-season has turned out to have been the key piece of their puzzle, with Lee dominating in each of his post-season starts. Lee gives up a fair number of hits, but his strike-out to walk ratio is unreal: in 2010, he struck out 185 while walking only 18! This guy throws strikes!
The key for the Giants in the Series, as it was in the NLCS, is to play error-free baseball, and use their park to advantage. Hamilton bats left, so the threat of his power is mitigated at Pac Bell Park. Keep Andrus off the bases (32 steals). Offensively, I'd advise our hitters not to let every first pitch go by, since they're unlikely to see a better one than that fast-ball to start the count.
Let the games begin!
Posted by Curtis Faville at 8:37 AM

Go Rangers! Sort of. Bush Jr was a drawback but they recovered...Aren't they Nolan Ryan's team now (or partially) ? So...former Angels boy (they could've used him this year)--that's reason enough to support Texass against the Fog Town Perps. Besides, any team that waxed the pinche Yankees like the Rangers did deserves some respect.

There's an election going on. It's in America's strategic best interest for the Giants to rout the Rangers. Remember Enron?

I saw the 6 runnings in the third inning in the first game, and watched the 7 runs in the eighth inning last night, too.

I used to love Willie Mays, and read a biography about him. Is he still around? Juan Marichal is still around. He signed cards last year at Cooperstown. I have a card of him that I had him sign. He was pleasant.

At least he didn't hit with me with a bat!

It was a big line so I didn't stop and chat, but I wish I had been able to do so.

But what's there to say? With baseball players, it's hard to know if they really think about things, or philosophize. When they interview sports stars they always say the same few things.

"THEIR PITCHING did the trick..."

One of my better recent poems details an afternoon with my son playing at his first baseball game.

You can hear my voice read the poem, too!

The poem that ends No Joy in Mudville comes to mind, but you'd think there'd be more avant-garde poems that talk about sports. Soupault had a few poems about boxers, and he has a novel in which the inmates of an asylum play tennis as part of their cure (Le Mort de Nick Carter).

I can't remember any good poems of Ginsberg's that are set in baseball stadiums. Corso has a few nice pieces about Ted Williams.

I think there should be an anthology of baseball poems. It's not such a popular game outside of America.

Finland has a professional league for something that they call baseball but the rules are slightly different and no one else plays with their rules. They want to get their specific game into the Summer Olympics. It's a bit like cricket and a bit like our game. their top team was caught throwing games in exchange for kickbacks about ten years ago.

The Giants it should be recalled battled long and hard with SD and LA as well--the NL west may be the most rough division in MLB Hardball. The Rangers might as well have brought the softballs, helmets, alum bats and underhand it--Dubya's probably upset.

The Great Gatsby has an interesting passage on pro baseball lore: Gatsby wants to introduce Carroway to one of his cronies, Wolfsheim, who Gatsby says arranged the world series--1919 black sox series. Also made into that not bad flick 8 men Out--F Scott was a drinking buddy of Ring Lardner, who knew the score on pro baseball--mob ruled from day one . Dimaggio for instance hired Murder Inc guys to do his bookkeeping.

Fog Town fans probably thought this series was over. They wuz wrong.

Bakersfield boy Colby Lewis (I may have met his mama once, on a Centralvalley road trip) slingin' for the Rangers, and....down they went (Ross almost opened it up...).

Great finish by Feliz---98 mph, low and inside. Really, I'm not particularly fond of RangersCo, but ....superior to the Giant-gangstas.

That said, Foxsports sucks as much as Fox pundits do. Split screens, abrupt camera moves, endless crowd shots, flag waving. The hyper-produced commercials and odd corporate rock jingles like out of Dystopian nightmare 101.

Where's Walker when you need him? Chuck Norris singing the national anthem is their only hope at this point.

Seeing the Bush clan out there (specially McChimpy BushCo II) some lukewarm Rangers supporters (ie Dodgers fans) may have considered shifting alliances for a few nano-seconds, yet...nyet. The Giants infield sort of a classic--machine, baybe-- but...perps they are (and Boy Boguesy looks like he might be fan club material for Castro/folsom district eh....then most Fog TOwn sschports heroes are....puh-leeeze)