Minimalism X: Isolation & Concentricity - On a Poem of Robert Grenier

At an extremity of tenderness and awe, I've spent the better part of my adult life in astonished regard of an early mentor whom I encountered at the threshold of my sense of myself as a writer and thinker about literature. After an intense year and a half as a student in his writing class at UC Berkeley in the late 1960's, I maintained but sporadic contact with him through the succeeding decades, until we reunited in the shared labor of editing Larry Eigner's Collected Poems [Stanford University Press, 2010], a task of some seven long years.
Life is often a series of disagreements or misapprehensions, and the resolution of them, often in doubt, may lead to revelation, or confusion. But as regards an objective standard--my appreciation and fascination with Bob's work--there has never been any wavering of my devotion. I often think that I am usually about 5-7 years behind Bob's progress, in terms of how fast his mind moves forward in time. I think it probably takes that long for me to become comfortable with, and to appreciate, just what he is doing at any particular moment. I recall the first time I encountered his S C R A W L works. Although I've never actually seen him "write" one, I watched as he collaborated in the imaging of them by a photographer whom he had contracted to document the work in chrome positives, using a 35 millimeter camera. This was a laborious process, but one which Bob was certain he needed to do, since there seemed no better medium available to preserve the work, which consisted of hand-drawn "visual" poems on facing pages of small art notebooks, in multi-colored inks. Each notebook contains/ed unique works, which cannot be "translated" into other media (such as print) without disturbing the character of the image, which is everything. 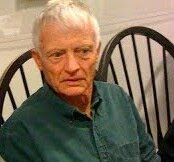 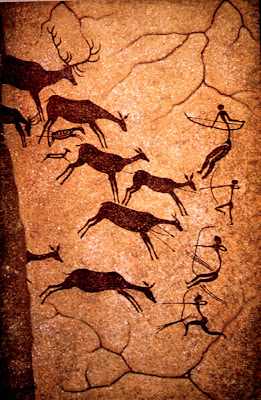 What happened to enable man to make "letters" (or "writing") instead of "pictures"? This was obviously a "moment" in the history of humankind which was transformative and revolutionary. Certainly many times more significant than the "invention" of moveable type. The original feeling for language which animates many of the best kinds of poetry--both traditional and experimental (in our time)--owes its power to this quality of apprehension of words. It may seem hopelessly reductive to focus on such minute particles of what has become a vast counting-house of data (language), but it is at this level that the actual building blocks of our understanding of language can be accurately recorded and speculated.
Posted by Curtis Faville at 4:44 AM

What does it mean?

Tho' no poet Im of the opinion words by themselves mean little or nothing, except as "connotation generators," which is to say--it could mean nearly anything. For one, is it a noun "jar",as in jar of moonshine, or izz it the verb "jar", as in making a harsh noise? Meaning depends on syntax, really, apart from the bare basic dictionary/thesaurus definitions. --interestingly enough (see online etym. dict) the noun "jar" supposedly comes from like spanish jarrah, which derives from...arabic. That is, it might. They're not sure.

So in a sense, "jar" in this instance might mean...the product of a wealthy belle-lettrist who had enough shekels to indulge in minimalistic writing. :] Alas, ee cummings-Co doesn't really do much for many of us. And ....to play... el abogado del Diablo por uno minuto...what would a Coleridge say?? I don't really know but I can't imagine a Coleridge-like scribe, fluent in a few languages, reading ancient greek and latin history,metaphysics, science et al would have approved of the minimal agenda.

All your points are valid. I don't dispute them.

There is a qualitative difference between writers who practice a minimalist strategy successfully, and those who don't. In Grenier's case, he was an admired and skilled poet in the traditional mode, long before he segued into untrammeled territory.

Efforts like his involve risk. There are those who will denigrate you for fobbing off simplicity and expecting the critical reader to "supply" the unwritten sub-text.

Nevertheless, Grenier is recognized as an important post-Modern minimalist poet. Before saying more about his work, you probably should sample it more fully. Go to Whale Cloth Press's online file of Grenier's Sentences, and read it (500 pages). It will only take you about 45 minutes.

I strongly disagree with your opinion that the poem consisting of the single word -- JAR -- which you say was included in a book published in 1978 -- was written/published at (to quote you exactly) "a point in time in which it was/would have been well beyond the known bounds of anything critics or writers of that time would have thought of as 'literature'" and that the poems "was so far ahead of its time that it eclipsed possible existing definitions of literature."

By the time Grenier's poem appeared in 1978, Aram Saroyan had been publishing similar work for more than a decade. Also, van den Heuvel had a one-worder in 1963.

Why be anonymous? It's so much nicer to deal with real people, instead of faceless entities.

With respect to the reception of work, I make no assumptions about the character and composition of my audience. If, for instance, 10 or 100 people in the world are "aware" or "understand" something in time, I don't think it's appropriate to "assume" that this constitutes anything like a plurality or meaningful segment of the possible WWW "audience", not to speak of the the world (culture).

It is indeed true that Saroyan's work had been "out there" for at least a decade when Grenier's Series [1978] appeared, but the effective audience for that work was relatively small; and, it's safe to say, of that group, very few had a clear perception of the metaphysical implications of what it meant. Creeley published Pieces in 1969. Grenier was very aware of both these influences, but he had a completely different vision and feeling for minimalism (as we now refer to it). Series is a transitional work, a bridge between the Dusk Road Games period, and the later S C R A W L works; there were other things, too--A Day at the Beach, and Phantom Anthems--but stylistically, Series falls into his "middle period" in terms of development.

It's not enough simply to say "people had published one word poems" by 1978. Of course they had. Part of the point of my post--the latest in a series devoted to Minimalism--is to point out the extent to which Grenier's focus on the potentials of minimalism was so much more intense and profound than what had been attempted before. There are those, for instance, who associate minimalism with concrete poetry or "visual poetry" but those comparisons are vague, weak, and not very useful in describing what the best practitioners are capable of.

My posts are directed at the whole audience (not just "literary"). It's perfectly valid to say that the vast majority of that audience not only is unfamiliar with minimalism as such, but also of figures such as Grenier. The numbers of critics, poets, or other serious students of writing "aware" of what Bob was "doing" in 1978 would have been quite small, by anyone's standards. In addition, depending upon anyone, in 1978, to respect and respond seriously to a poem like this one AT THAT TIME, would have required a degree of faith, shall we say? Were you aware of Grenier in 1978?

That kind of dialectic, Aristotelian in its efficiency, requires the construction of an Hegelian triad, placing the speaker (and reader) in an objective position as viewer or observer; the relationship between the poem and its possible audience is fixed: The poem is a transference of linguistic data from a speaker who proposes, and a reader who responds.


Poetry itself seems rather non-Hegelian--and that's egregiously so with imagists and minimalists. NO history, no human struggles, no war, politics, death, romance--just a few obscure images . At times perhaps there is beauty--like a few pleasant seconds in Chopin or something. But ...sublimity there is not--the dialectic if there be one, is like reader/work, not say....Russia vs France. Here's a minima-du jour: SKULL.

Few if any poets will compete with a Crime and Punishment. Moby Dick. Or Cien anos de soledad. Heart of Darkness. Or many other great novels and stories--e.g., Hemingway's In our Time. That doesn't stop them from trying to cheat their way into greatness--and again, Coleridge isn't their model anyway. Creeleys or haikus are. Why bother with Cien Anos ... when Cien Secondas will generally suffice at Cafe Beatnik.

When was Saroyan's book read on the Nightly News? Wasn't that in the 1960s? Plus, Saroyan had already earned a 7000 dollar grant for his one-word poem li gh t, I think, it went.

Still, interesting to hear of your fascination with Grenier, whose work I don't know except for mentions.

I had read Saroyan's work for decades, and have corresponded with him.

a similar poet who is going in a completely different direction is Mike Topp.