To anyone who has ever entertained an interest in, or a taste for, Modern Architecture--especially what came to be known as the International Style--the work of the French architect Le Corbusier holds a preeminent place. Born a Swiss in 1887, Charles-Édouard Jeanneret took the name Le Corbusier (roughly signifying the "crow-like one"), and French citizenship in 1930, by which date he had unquestionably established himself as one among the leading proponents of the new construction style which employed forms and principles which are today clichés of the building industry.
Throughout history--at least as far back as the Greeks--architects have been diverted by the concept of a detached villa, or private residence, isolated amidst the purity of the natural (or semi-, or faux natural) landscape. Affording the opportunity to demonstrate the ideal condition of the man or family of means, it offers great latitude in the expression of concepts of living, and the chance to explore a pure realization of a given vision of perfected living. No architect worth his salt hasn't fantasized about such a dream commission. Palladio, the great Italian Renaissance architect [1508-1580], designed over thirty such projects, becoming in the process the most influential designer in Western architectural history. 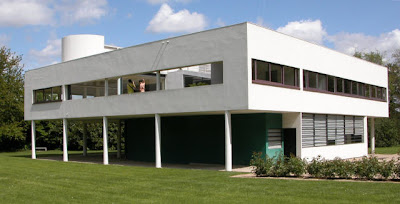 For most important architects, like Palladio, and countless figures who came after, practicing architecture has meant cultivating patronage among the gentry or nobility--or those in position of authority over the construction of civic, public or royal buildings. This was certainly true of Palladio, and it continues to be so today, though to a lesser extent. 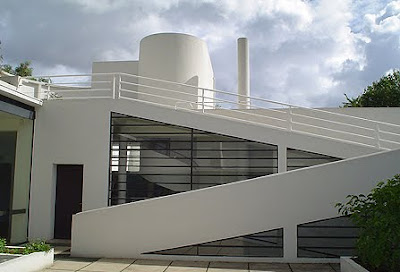 Because of the political and artistic convulsions of society and culture which took place over the span of Le Corbusier's life, the role of the architect--his function and place in the world--changed radically. The vision of life based on the privilege of class and means--of a society organized around the concentration of power in the hands of a few wealthy individuals, due either to divine right, or the perpetuation of property--underwent a steadily accelerating process of de-stabilization throughout the latter 18th, 19th, and early 20th Centuries, such that by the period of Corbusier's early practice in the years leading up to WWI, architects were no longer thinking primarily of satisfying staid, aristocratic ideals of grandeur and pompous ostentation, but envisioning monuments to the age of machinery, industrialization, healthful living, a spirit of openness, liberation and austere simplicity. The architecture they dreamed of--like the society and environment they were embracing--would be a validation of these principles. 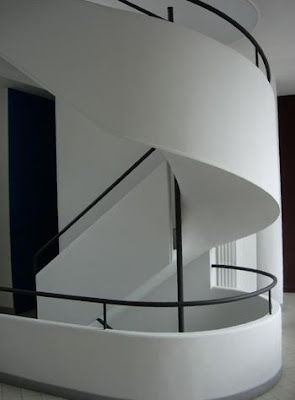 The design principles which characterize the Modernist architectural innovations during the first half of the 20th Century are due in no small part to Corbusier's formulations. He called his basic guide The Five Points:
1. Pilotis, or ground-level supporting columns, elevate the building from the ground, allowing the garden to flow beneath.
2. A flat roof terrace for domestic purposes, including a garden area.
2. A free plan, facilitated by the elimination of load-bearing walls, consisting of partitions placed where they are needed without regard for those on adjoining levels.
4. Horizontal windows allowing for illumination and ventilation.
5. A freely-designed facade, unconstrained by load-bearing considerations, consisting of a thin skin of wall and windows.
These stylistic forms are by now completely familiar, and have even to a significant degree been repudiated by later generations of designers and theorists. Nevertheless, they were very novel and ingenious in 1929, when Corbusier's Villa Savoye was completed. The building, as can be seen easily in these random color photos, has obvious affinities with nautical forms, industrial designs (which were much less common then, again, than they are to our historically jaded eyes), the hermetically "pure" white spaces uncluttered with any applied decoration or structurally "expressed" articulations, the discrete separation of the building from the ground (in effect, making it seem as if the building is "floating"), an overall lightness and translucency, a kind of geometric simplicity of the massing (the dialectic between interior and exterior voids), and a free interactive flow of light and air inviting the eye and the mind outward. Originally constructed to occupy a pristine position among forested acres, it's now surrounded by other impinging structures. 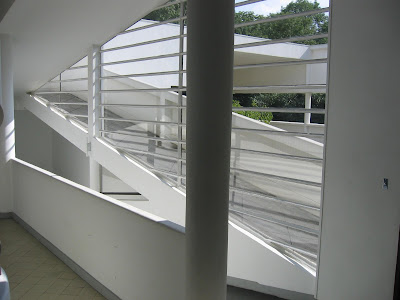 The life-style of the probable inhabitants imagined by Le Corbusier--one of ascetic, athletic, energetic vigor, of cleanliness, simplicity and optimistic self-improvement--may seem naive and utopian to our jaded sensibilities today (there's really no place to hide in a building like this, with its cross-views and curtain-less glazed interior and exterior walls and panels)--but at the time, such emancipations of life-style and clear, white space felt inspiring and new. Too, looking at the rooms in this house, one has an unwholesome sense of loneliness and alienation, the way one feels occasionally in a clinic or a sports facility. And indeed, Corbusier's adoption of the dry language of cool, sleek surfaces and "empty" living spaces suggest an icy reactionary extreme to the over-elaborated workmanship of Art Nouveau, Arts & Crafts-manship, or the Beaux Arts traditions. 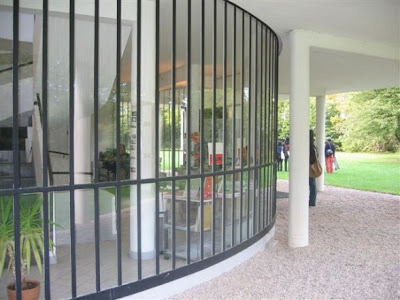 Nevertheless, this building exerts a powerful influence upon architectural trends to this day. The so-called Five White Architects of the 1960's--Graves, Meier, Gwathmey, Hejduk and Eisenman--each owed their primary impetus to Corbusier's mastery of simple while planes, translucent purity and liberated (floating) structures. 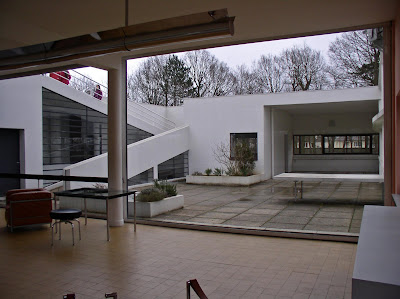 I can recall my own personal honeymoon with Corb's futuristic villas, back when I was studying design for a degree in the 1970's. I thought I'd like to live in a house like this, all light and air and immaculate poise. But the phase passed. Imagining a different life through the construction of different spaces is a favorite pastime for some. Most of us live in houses whose design and location is a compromise between cost, necessity, and preference. The "freedom" to have the kind of space each of us desires is one of the illusions of the modern age--a fantasy which few are able to carry out. So we may live through another person's vision of an idealized space, and even privately aspire to the life we imagine that structure implies. But seldom do people live the kind of life they think they should, even when they can afford to match their dream down to the minutest detail. 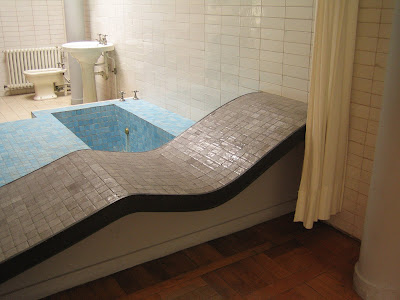 Posted by Curtis Faville at 9:24 PM

is it not also true that these architects these designers believed that their work was perhaps only relevant to the time they lived and maybe a little after...every generation should design and build their own buildings...so that in effect there is something ephemeral designed into the buildings...sometimes i think that some of the ideals of this period were diluted as they came across the sea...they got caught and tied into american progressivism and were hard-cast upon the land....whereas i see le corbusier taking a form and sensing how gracefully it might return to the earth from which it came...that principle seems to be lost upon north american proponents of the intlstyle...although you loook at soem of the mies van der rohe buildings in downtown chicago and they're daily looking more delapidated and the lloyd wright house is crumbling too

it was a mistake to abandon the structural arch...but we'll never admit to it

i live in a bauhaus bowwow house
box

The early Modernist architects believed that their buildings were emancipations in the same way that philosophers and socio-political thinkers believed that new organizations of society would lead to a better, more equitable future. Much of the new design of the 1930's and 1940's was posited on this new egalitarianism and populist theory. Did it get old?

It sure seems so now. But they believed fervently in their cause. Le Corbusier designed the Unité Habitation, a big multi-storied cell-block that was supposed to house dozens of living units in convenient, streamlined, utility. But we now know how awful such living can be--as evidence the failure of "mass housing" and "welfare blocs" from the 1950's and 1960's, much of which has been torn down now.

The Getty architect---Gehry?--must have gazed at many of Le Corbusier's buildings. Nice work if you can get it..and you won't get it even if you try.

Architecture may be one of capitalism's greatest allies, regardless of the artistes' intentions. Le Corbusier or FL Wright, Johnson, et al may have wanted humanistic, organic buildings--and communities--but generally those ahhty, organic houses (or buildings, galleries) are now worth millions.

the german bauhaus took this idea and actually devised "machines" to be lived in...and as you point out curtis | this resulted in boxed in and prison like living - many of these structures still stand rather tall in newjersey and in places in minnesota - recently we heard of a person who was found dead in and apt. a bauhaus apt in mpls this person had been dead for 6 months and nobody knew -- well something has broken down -- perhaps the value of community

the modernist push seems to have streamlined construction - which is odd because some of the more impressive structures required excruciating detail work - but as the shapes and the notions translated themselves into affordable living and practical business places priorities tended to be placed on speed of construction and profit for the builders more than holding to the integrity of designs...suburban america is full of such things


my understanding of le corbusier (and i have the biography by nicholas fox weber right here on my desk) and the "machine" notion is that he still retained some sense that necessary life activity takes place around the home: gardens wood for fires daily meals etc.
based on the age old rural requirements for survival...yet as it was interpreted in the bauhaus it seems to me that they took the notion of the "machine" quite literally and brought the most modern technology complete with the illusions of "good" in it all to bear... and created this notion of homes that are in fact today machine like: kitchens on timers; garages that open with a snap of the fingers clap on lights, tv rooms entertainment centers with access to everything smart beds

in recent deliberations with a friend concerning some house renovation she expressed anxiety about details in the construction that troubled her personally and i asked her what would it be like if you looked at your decisions not for your own tastes but for perhaps the next owner or what might a normal person simply appreciate not so much from and aesthetic view but from a practical view...well she claims this helped her to realize some practical solutions...most of which cut costs rather than adding them and making the process simpler

simple spacious functional these values have been communicated

perhaps in a newer phase we will return to the practicality of craftsmen...something the modernist style seems to have all but obliterated

Looks like the Bauhaus Museum in Berlin. You cross the Spree on a footbridge and you're in what used to be East Berlin. The museum's on the river bank. The items on exhibit were mostly household furniture and utensils that were fashionable in late Weimar Germany when Hitler came to power; Richie Cunningham's house in Happy Days.

Meier-- the man responsible for the Getty

Much of Meier's work builds on the work of architects of the early to mid-20th century, especially that of Le Corbusier and, in particular, Le Corbusier's early phase. Meier has built more using Corbusier's ideas than anyone, including Le Corbusier himself