James Welch [1940-2003] was an authentic Native American writer. Nothing phony about him, just the genuine article. He grew up on the reservation in Montana, didn't do much in school, until he got to the University of Montana, where he hooked up with Richard Hugo, and began writing poetry. Hugo was probably the perfect teacher for Welch. Hugo was, like Raymond Carver, a lover of fishing and the outdoors, and he must have seen immediately that Welch had a credible and valid point of view, and a window on an experience that no Native American had ever been able to describe. He had a story to tell, and an ability which developed rapidly under Hugo's tutelage. 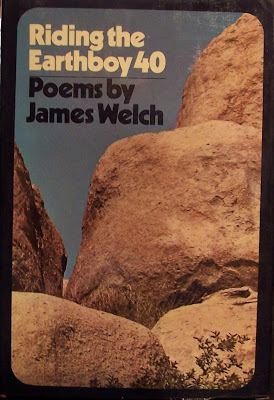 I was lucky one day in Iowa City to find a copy of Welch's (then) new book, Riding the Earthboy 40 [New York: World Publishing Company, 1971]. This was Welch's first book, an auspicious debut for sure, but I came to it with few preconceptions. I'd only read one other book by or about Native American cultural experience: When the Legends Die, by Hal Borland [Philadelphia: Lippincott, 1963], the harrowing story of an Indian boy who leaves the reservation to live among the whites. I'd acquired a sympathy for the Native American dilemma at a fairly young age, and didn't harbor any of the usual prejudices towards them which are so common (or used to be) among the American middle-class. 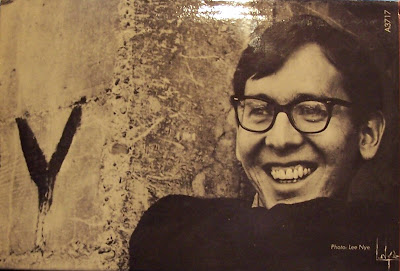 When I worked for the government, I got to know a full-blooded Blackfoot woman who had grown up near Flathead Lake in Montana, and learned from her some of the politics of reservation life, and the struggle to retain native folk traditions, language and indigenous culture--which was rapidly passing into oblivion. But that was later.
When I first read Welch's poems in Earthboy, they didn't sound like the usual academic "workshop" poems so common in those years (1960's and 1970's) in the periodicals and MFA programs of the day. His poems resonated with imagery and directness of feeling that made all that "strategizing" and fancy footwork seem like so much idle knitting and crocheting. One of my favorites was
Visit
I come alone. To surprise you
I leave no sign, my name
shucked at the familiar gate.
Your name is implied in exile.
I bring meat for your memory,
wine for the skinning of muskrats.
I leave this wood, not much,
but enough to streak your face
a winter red despair.
Why no songs, no ceremony?
Set your traps to catch my one
last track, the peculiar scent,
goodbyes creaking in the pines.
Reading this, I knew at once that the quality of the details, which derive from a vivid rural, perhaps even a semi-wilderness aspect, was authentic. It spoke to me at once with a harsh grace, a matter-of-factness verging on desperation, of the possibility of love where love is scarce, and affection doesn't come cheap. Was it really a love poem, an overture to difficult romance, or something else? The ambiguity of the relationship works in the poem's favor, since the kind of attitude implied by the speaker's tone is anything but gently affectionate. The speaker comes in peace, bearing gifts of meat, wine and firewood. Why? Is he currying favor? He leaves his "name" at the gate, and the occupant is in some sort of "exile"--but from what? Does he leave empty-handed; and if he does, can he still be "trapped" by his own desire? And so the "goodbyes" are just the lonely, but beautiful, sound of wind bending the pines, the "creaking" sound so familiar in the Rocky Mountain country. The beauty of that "winter red despair" like a flag of desperation forsaken or abandoned. There's a cold wind blowing through this poem. You have to put your hands in your pockets. The big grey clouds are moving fast and silent over the horizon. No one home. The poem is eerily evocative of the Montana countryside, a lonely place at times.
Later, I came to know Richard Hugo a little, and he recounted the episode of the fishing expedition in Montana which was the occasion for the three poems on the same theme, which ended up getting published in The New Yorker as "The Only Bar in Dixon [Montana]". Welch, and fellow poet J.D. Reed were the other two companions whose poems were included. Reed died in New Jersey in 2005. Hugo, who suffered from depression, obesity and severe alcoholism, passed away in 1982.
Thanksgiving at Snake Butte
In time we rode that trail
up the butte as far as time
would let us. The answer to our time
lay hidden in the long grasses
on the top. Antelope scattered
through the rocks before us, clattered
unseen down the easy slope to the west.
Our horses balked, stiff-legged,
their nostrils flared at something unseen
gliding smoothly through brush away.
On top, our horses broke, loped through
a small stand of stunted pine, then jolted
to a nervous walk. Before us lay
the smooth stones of our ancestors, the fish,
the lizard, snake and bent-kneed
bowman--etched by something crude,
by a wandering race, driven by their names
for time: its winds, its rain, its snow
and the cold moon tugging at the crude figures
in this, the season of their loss.
How different it is for a Native American to cross the land where his ancestors roamed, than for immigrants, for whom the land must always be "new," an unsettled expanse of "open country." But the signs are in the ground. Written in the rocks. A rumor in the wind. Experiencing country by horseback is less and less familiar. The poem is an elegy, but it has a toughness, leathery, gruff, potent. Some of that tone comes right out of Hugo, the "seal's bark" through the salt spray. The powers--fish, lizard, snake--are the same deities Michael McClure summons from the buried ancestral memory of the race. Here they seem more actual, not just poetic symbols.
There's an unresolved dilemma in Welch's work, the uncertain balance of our Native races poised between a lost past, and an uncertain future dissolving into the chaos of the mindless advance of capital. Memories don't make a life, and identity can't be cobbled from the detritus of waste. Whatever it is that Welch's work tells us, it won't be a simple gift from a beneficent, all-suffering power which died to make men free, or devout, or prostrate with gratitude. It might be a vengeful deity, bearing a warning. It might come up out of the ground, or down from the sky, or through the braided creeks of the high country. What it tells us we'd be advised to consider. 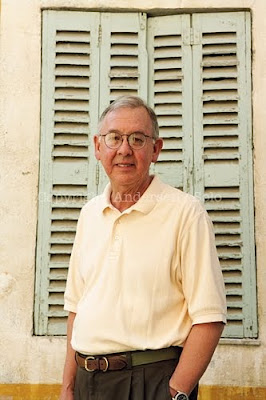 Posted by Curtis Faville at 7:48 PM

You're very drawn to the earthy naturalist types.

Reading through the Wikipedia article on World Views in America, this last one struck me as very true for some big part of you, Curtis:

"Green Malthusianism synthesizes mystical versions of environmentalism with alarm about population growth in the tradition of the Rev. Thomas Malthus."

I don't think it's the whole story, but the part of you that likes Snyder and wants to go hiking, is like this. You're also very Malthusian when you talk about illegal immigration.

What journals support that worldview?

I'm more driven by some kind of hysteria about the law. I see the law (derived from the ten commandments) as the only thing that can hold this vast and diverse population together.

It freaks me out that more people aren't holding to the ten commandments, and trying to learn all they can about the Bible, and God.

At the same time I'm drawn to humor and humorists, because I think there should be some sense of humor about our ability to follow laws to the letter. I think we can follow them in spirit, though.

But I think we should also be allowed to joke about them, and to describe the lawless, and even to revel in beautiful depictions of lawlessness. The Bible does thus revel. What else is Salome? What else are the wonderful descriptions of Sodom and the stories of the weird and misbegotten in Revelations?

The Jerry Falwell of beatnik-Co bleats--KO never quite got to Wordsworth 101 . Or Aquinas's teleological argument (or...the Psalmist's...firmament hymn for that matter, puto).

Nature's.....Eeeevil, according to WASP-co. Better to keep it Screeptural, Sir F.--injun stuff, and the hicks start reachin for their Jeb Stuart feather

That said, multiculturalism (including the literary forms) is not immune from critique--though the biblethumpers are not usually qualified to offer that critique . Who is, Sir F ?? Not sure. A person who knows something about Plato, or Hegel, european and asian history and Darwin & Co. Hegel disapproved of the American's treatment of natives, IIRC.


Yet....I'd say America has tended to multiculturalism, from an early date. In colonial days, there were attempts at synthesis, though the Anglos usually betrayed the natives (as with handing out poisoned booze, and then killing them--related to the Pochahontas tale, etc)--though granted the natives often abducted and killed settlers.

Jefferson was hardly perfect but had a few Rousseauean thoughts and reached out to the natives at an early date. The Emersonian group, not entirely free of hypocrisy also had an interest in native Americans, did they not. The intense dislike of natives was usually the low-church types--baptists and presbyterians. Natives fought on both sides of Civil war (comanches, and choctaws wore....grey)

Really Academia tends to ignore the indian wars--its not grand european/asian style warfare. But bloody business nonetheless (as with the WASP-mormon slaughter of Shoshone at Bear river, generally overlooked).

Anyway Sir F--some of us, not like professional academics, learned something from your essay on Welch, and native Amer. writings. (not to say about phonies who consider the so-called "Decalogue" the Alpha and Omega of western civilization. Some good that rule book was in colonial America--Puritans seized the natives' properties, and killed and raped them at will. KO apparently never made it to Judeo-Christian Hypocrisy 101)

I don't like too much peace. The notion of peace and plenty, with smoke signals of love and harmony, makes me a little sick. Welch came and read to us when I was at Evergreen. I felt bored. I wanted so much to like it, but preferred Patti Smith when she came.