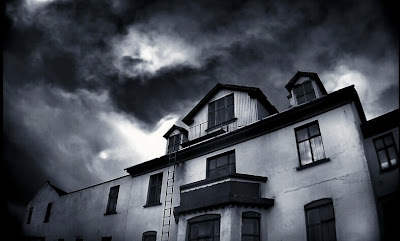 I had wanted to write a poem out of the barest essentials of "deep image" inspiration. Then--in the early 1970's--it was still very much a preoccupation among poets and critics. The deep image, duende (as some referred to it), had derived from hispanic sources. Lorca had spoken of it, as a kind of "dark sound" of authenticity and power--"that mysterious power that everyone feels but no philosopher can explain." The duende may be a lyric, an image, or a design which stands for this feeling. In American poetry, Robert Bly had led a loosely defined group of poets for whom the deep image was an abiding element. Supposedly, South American and Spanish poets possessed the skill to evoke the duende, or to employ the duende. You could, accurately, say the duende was a sort of ghost or goblin, which hid in or haunted certain imaginative precincts, and that to capture this spirit in a work of art was to seize a little bit of magic in a jar. American deep image poems usually had generic settings, and the nominatives (nouns)--barns, wells, doors, clouds, echoes, etc.--usually were intended to have a resonance or evocative echo in the unconscious mind. Freud, Jung, Surrealism, Abstract Expressionism--each played a part in feeding into the development of a deep image concept. Today, people don't remark the deep image movement much any more. Movements run their course, may be forgotten, or subsumed within the continuing evolution of artistic production. It was a style, perhaps, which ran its course.
The following poem was composed in the early 1970's, perhaps as early as 1973, or as late as 1976. I didn't intend it to be an imitation of any other writer's poems, but to try my hand at the genre (if one may call it that). I've come to think of it over the years as one of my more successful poems, though I feel a certain distance from it, since it's generic and hermetic (within its sphere of reference). I'm surprised now at how it functions as an exercise in linguistic metaphor--the act of naming, and what that process implies. Names may conceal at the same time they reveal. They may cover over reality with an apparent comforting surface, or divulge troublesome or frightening aspects. Names are ambiguous. I said once "naming is a sin" in connection with some of Gertrude Stein's works. She often seemed to want to disentangle names from things, to set words free from pure referentiality. In ordinary discourse, we don't want to do this, but in art, it's a way of releasing the power and suggestiveness of words. But in this poem, my use of words wasn't non-referential, it was primarily symbolic. My use of certain nouns--like the things in a house, or on a lake, or in a forest--were meant to invoke universals of things, rather than specific places, persons or objects. That universality seemed to me to be what the deep image poets did in their poems: A language of objects organized into a coherent whole, through the skein of words. A mobile of half-real, or imagined, relationships of objects which told some kind of story through them.
The Boat
1
Fists of water. You name each wedge of light,
let it wake you. The house splits
along the seams there, your body a boat
to it. There is dirt in the egg,
hard ground. The sheets ask for knives,
the door for a tooth. Names sink in the stream.
2
Boards cover a face. In the attic
are mountains. The boat begs to be let
in, wanting a name. Under the bed
a pile of dirt, water rising
in the other room. Near the well voices
saved and not saved. And not enough string.
3
The well rooted in darkness. You knew
skin of geese, knives found water
knotted. Fire shuns water (hissing), the word floated
on the surface, with the slime.
The soap blue-edged, morning halved.
4
The old houses bound in light.
Fathers prevent me on the stairway. The vulnerable
shark, I touch her panic, it is a lake.
Boards flying to windows, shore light.
Dawn aborted the boat.
Oars creak in the house.
5
Each road leads to a room. In the closet
water, the rudder. The loaf grows
patches of numbness, fingertips. The blankets (guests)
want names (rising), and the sleeves. In the
room, a forest, air. The fake rooms.
6
The boards want names. So a rope
holds a boat to shore. The lake is calm
tonight, she murmurs. He wants to know
where the road is buried, how
names bandage things with the invisible.
7
The door contracts. How light sheds dimension
on the house, breathing a little flame in.
How water rings the boat.
Being shy of wells, you climb dry rungs
to the boat, and rock. The house contracts
around you, for you have entered
it completely, though tethered to her.
--1973-76
Reading it again, it seems like the evocation of a haunted house, a house on a lake. Or of dreaming of being in a house on a lake, perhaps from one's past. Images of jeopardy, perhaps of conflict, foreboding.
Posted by Curtis Faville at 1:44 PM

the 'duende' (a term I'm discovering for the first time)may be out of fashion but only because there doesn't seem to be the talent out there for it (except perhaps in some fringe 'quietist' corners).I particularly appreciate the point about not wanting to 'name' (overtly)and give mood, impression directly and, as you say, almost magically. And who better to lead the way than the great Lorca. I think Spicer know the 'deep image' very well, too.

I think your poem, though youthful & perhaps a bit over attentive to 'form', is excellent. Thank you for sharing "The Boat".