O'Hara's “For Grace, After a Party”

Ted Berrigan once said that this was one of his favorite O'Hara poems. Berrigan, who could sound insincere when making pronouncements, had a very sentimental side to his nature, which seemed at odds with the ruthless rationality--or deeply cutting humor--with which he gauged reality. The Sonnets is both things, really, a deeply emotional and committed record of daily life, filled with affection and delight, but also an intellectual exercise in the formal manipulation of segments of language. Berrigan admired O'Hara's ability to write a seemingly casual and relaxed poem, whose formal technique was concealed beneath an apparently guileless surface of conversational statement(s). He probably would have said that there was no separation, that O'Hara's poem was simply a straightforward series of statements, and that there was no artificiality in its setting or "strategic" moves. But he would also, I'm sure, have acknowledged that everyone maneuvers, on an interpersonal level, and preconceives the effect that their words will have on a (the) listener.
For Grace, After a Party 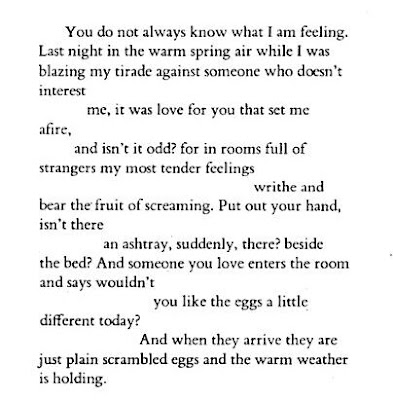 There's usually a very nice, clear "high & low" tension in an O'Hara poem, between the high calling of the occasion of a poetic utterance, and the low(er) circumstance of the subject matter he chose. Sometimes it's funny, maybe even a little bit embarrassing--especially in light company--but other times it lifts the ordinary into warm illumination, becoming memorable. The tension in this poem, too, is between the speaker's exalted, and slightly exaggerated romantic emotional earnestness ("my most tender feelings/writhe"), and the quotidian facts of an implied "morning after" of waking up in bed with someone--perhaps a lover, or maybe just a close friend. The poem begins in a sort of petulant, passive-aggressive mood ("You do not always know what I am feeling") but also sets a mood of casual seriousness that sets the stage for deeper disclosures, a more personal revelation. It's a love poem, but a disarmingly down-to-earth one. And it's that familiarity--smoking in bed, someone making scrambled eggs in the same old way, the arrival of warm spring days--which allows the poet the permission to address the intensity ("the fruit of screaming") of his feelings--he's earned that with the unassuming way in which he broaches the topic. Those feelings--as often in O'Hara's work--may seem a little over the top, but there's almost always enough routine detail to balance the emotional thrall with the nagging distraction of physical realities. The ashtray and the eggs and the warm morning air anchor the poem's urgent outcry of affection, and allow us to share it, without having to put on a full suit of armor (or a wig) to appreciate it. 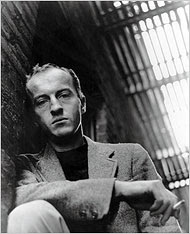 That "personal" quality in most of O'Hara's poems--he called it Personism--was a way of removing the traditional artistic barriers between author and reader (person to person), of suppressing the apparent tension of elevated purpose which all art implies, in order to engage in a democratic intercourse.
Like much great art, too, this poem feels "easy." And, like all things that are effecting, and seem easy, it isn't (or wasn't) an easy feat to bring off. I say the "apparent" tension of elevated purpose in the above paragraph, but of course no really good poem is ever an accident. The ingenuity of "For Grace, After a Party," is partly the shrewd invention of circumstance, thinking to write a poem as a description of a conversation on the morning after. We know that will be fraught with some kind of emotional freight . . . it's a moment of confessions, of acknowledgments and declarations. How could it not be, even if the content were otherwise conventional? Sunday morning--oh god, do I have a hangover!--probably not a work day. But the poem, of course, is not addressed to the reader, it's aimed squarely at the person who's in the same room with the speaker. It's a little playlet in which the previous night's behavior is being reviewed and summarized, and the speaker wants this other person to know why he behaved as he did, going on and on, at the party the night before, a little out of control, about some intellectual point of an argument, but driven, inspired by the affection he is feeling in the flush of physical exuberance, the way we always feel when we're in the thick of a new relationship.
The brief erotic or love lyric has a long history. Dante and Shakespeare and Donne and Marvell and Browning and Poe and D.H. Lawrence. O'Hara's poem, published in the early 1960's, conceived of it informally. Every love poem isn't a marriage ceremony, in which the participants make public vows with pomp & circumstance. Each generation redefines and updates its version of the form. O'Hara sees it in the context of a privacy in which each party's vulnerability turns on uncertainty. Poetry is a way of exclaiming what, under ordinary circumstances, may sound corny, trite or pretentious. Poetry itself is a kind of pretense, that anyone should think to talk openly about a private passion, in a way that anyone could share or appreciate second-hand. A love lyric is a window on a very private affair, the gist of which is that the poet either cannot contain his affection, or his distress, or his impatience, and uses the poem as a vehicle to get that out, into the world. But that process may occur without in any way injuring the object of one's affection, or of embarrassing them.
Is love an embarrassment? In some ways it is. In other ways, it is certainly not. No one should be embarrassed to express love, but of course passion and affection are always first private things, before they're expressed. Love makes the world go around, but our emotions are rarely sensible, or convenient. Love unrequited. Love ventured or lost. Secret loves. The range of affection is as broad as the ways we may think to describe it. O'Hara's lyric is a classic of its kind.
Posted by Curtis Faville at 9:58 AM

I love this poem by O'Hara. I'm not familiar with his work, but will look for some.
Your reflections and critique make me feel like writing some poetry myself. But, I'd probably be too embarrassed.

"O'Hara's lyric is a classic of its kind."

I discovered O'Hara about a year ago and have read everything he's written. It's not often poetry inspires awe and a sense of unachievable poetic mastery but it always does here. I don't think he wrote just "a classic of its kind" : anything/anyone can be easily slotted into that characterization. Silliman can be considered a "classic" in that narrowing sense.

I believe O'Hara is classical in the way Rilke is classical, or Berryman or Saint-John Perse. A poet whose moods, rhythms and aesthetic sensibilities almost 'transcend' their times. And I certainly resent any categorizations of him (whatever the influences) as just a New York poet.

Any discussion of O'Hara will inevitably get around to this sense of the perfection of genres, since he began to write out of a sense of classical categories. The poems from his first period (Michigan and early New York work) are about equally divided between Greek and French models, with some Mayakovsky mixed in. The arc of his career and development was increasingly away from strict formal constraints to free appropriation of speech-centered poetics, expanded senses of the line--Biotherm is rather like a Pollock canvas.

This lyric is early mid-career, and it's in no "recognizable form." Yet it has a classical finish--an economy and efficiency of means--which feels nearly air-tight. This despite an apparent casualness and extemporaneousness.

Classic needn't be a negative. It certainly is a "New York School" poem, but in what sense is that limiting? Categories don't limit examples, they help us understand it. On the other hand, I have been among the most vociferous critics of those wishing to divide writers into factions along formal or aesthetic lines. A writer is not more important "because" of his associations, nor less so. Any writer who believes he's important because of his associations is deluded.

Thank you for the introduction to O'Hara. I have found many samples of his work on the web and am very impressed and moved by his voice and imagery. Now I'll look for him in the library.

I used to read O'Hara all through but don't remember this poem. I like everything but his critical appraisals which are strangely weak, almost as if he couldn't actually think, at least in terms of the pictorial representation. but his tiny piece on corso is a gem. I loved this poem. thanks for making it available.