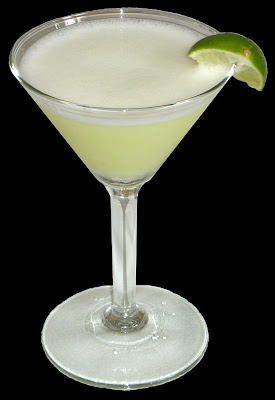 Dry ice is interesting stuff, and it has practical uses of which I was unaware, until I seized on it as a name for this cocktail. About all I know about it is that when you put a "soft" object into it--like a rose, for instance--it turns it brittle as glass! The gassing off appears as a "smoky" or simmering cloud, as if it were hot. But it's very, very cold! At atmospheric pressures (on earth) it is -109.3 degrees Fahrenheit! That's cold. You have to handle it with care, since if it touches you it can cause "freeze burns" of frost-bite. That's what happens to people who climb mountains in the Himalayas! Ouch!
But more to the point, tropical drinks are designed to cool you down. It's true that alcohol actually has the opposite effect when ingested. But in the eye of the overheated customer, a cool drink with lime overtones has an irresistible attraction. Which is why so many citrus cocktail drinks are consumed during the hot summer months. 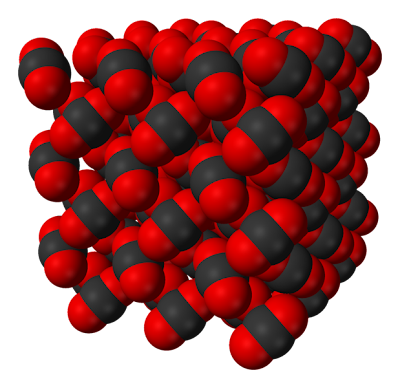 Crystal structure of dry ice
So here's my version of a rather dry, but seductive Summer lime flavored cocktail, measured out, as usual, by proportion, rather than as a total (don't want to encourage an unnecessary inebriation!).
4 parts white rum
1 part cachaca
1 part créme de bananae
1 part limoncello
juice of 1 1/2 whole fresh lime
--shaken vigorously and served up in a chilled cocktail glass.
I guarantee this will make you think of the Bahamas, or of Mazatlan, or of the Cook Islands. Or perhaps of British India during the height of the Raj. We all have our orient of the imagination. 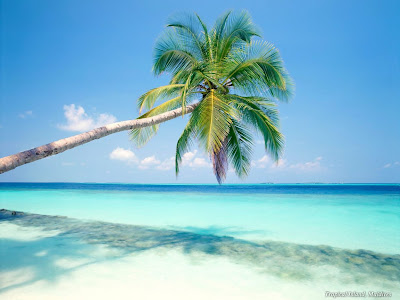 Posted by Curtis Faville at 6:04 PM

The atmosphere of Mars is roughly 95% carbon dioxide and the average mean temperature is about -80 F. Much of the dry ice collects around the poles. It's conjectured that there may be large pockets of water ice beneath the dry ice or frozen CO2 polar caps and also locked into the near surface tundra across the planet, enough perhaps that, if melted, liquid water could cover the entire surface of the planet to a depth of twelve meters or more. It's also conjectured that raising the average mean temperature by 4 degrees Centigrade or about 8F could set off a chain reaction, a runaway greenhouse effect, that could result in a new equilibrium with dramatically increased atmospheric pressure, substantial bodies of liquid water and average mean temperatures at or near 0 degrees Centigrade.

Solar reflectors in stationary orbit above the poles are thought to be one means by which Martian global warming could be realistically achieved. Once thawed to a point warm enough to support simple plant life, photosynthesis would steadily feed on the CO2 in the atmosphere and release oxygen, greatly contributing to the greenhouse effect and pressurizing the lower atmosphere.

Earthlings hoping to colonize Mars in the near future are apt to sail there in habitats shaped like a bathysphere suspended from immense sails made of hyperthin Mylar or something like it that can be propelled by light emitted from the sun, probably in conjunction with ion thrusters that use solar powered electricity to ionize argon into attitudinal, directional and propulsive thrust. This is a spacecraft that would be powered essentially by sun light and a brace of kitchen ready microwave ovens, producing in tandem enough power to overcome the gravitational pull of the sun. Its advantage is that, except for a few pounds of argon gas, it wouldn't require fuel. The amount of water needed to support life for a journey of a year or more would be stored between the outer and inner hulls, shielding the occupants from heat, cold and ultraviolet radiation. The inner hull would rotate at a speed sufficient to provide artificial or centrifugal gravity to a substantial portion of the spacecraft's interior.

The bad news is that the very low rate of acceleration away from the sun would require months if not years to achieve cruising speed necessary for crossing the quite significant if not vast distance between Earth's orbit and that of Mars. This disadvantage is overcome by aligning the sail parallel to the direction of the light emitted from the sun instead of at a right angle to it. The ship goes into a steeply elliptical orbit around the sun rather than the relatively round Earth orbit with which its flight began. It hurtles toward the sun at an incredible speed, loops around the sun from inside the orbit of Mercury, then turns its sail, setting a course to intercept Mars, while taking full advantage of both its accumulated momentum and the added thrust the sail receives from its near proximity to the sun.

When the spacecraft next passes Earth's orbit it is moving faster than any known object in the recorded history of the solar system, fast enough to intercept Mars or to sail well beyond Mars, the asteroid belt, the gas giants, Jupiter, Saturn, Neptune and Uranus, or even beyond the solar system into interstellar space. The trick at that point will be to slow it down enough to avoid overshooting Mars. Once in orbit around Mars it becomes a matter of managing a safe landing on Mars while contributing the Mylar sail to an ongoing effort to humidify Mars.

The solar sail the Japanese space agency sent to Venus last year, Ikaros, deployed its sail in June and passed within 50,000 miles of Venus in a trip that took approximately six months. It was supposed to go into a steep ellipse around the sun after the Venus fly by. I haven't seen anything to indicate if it successfully emerged from what seems to me to be an attempt to utilize the solar slingshot effect.

I guess the underlying questions I have to your long discussion here would be why it would be either desirable or necessary to go to such lengths to establish a "colony" on such inhospitable territory, when we already have a veritable paradise (by comparison) right here. Why, indeed, would mankind find it either necessary or desirable to allow his numbers to increase to such a degree that we exhausted the relatively moderate resources of our own planet? Why wouldn't it be more desirable to live in an ecological balance with the accumulated flora and fauna we share the planet with, than to spoil it and then move on to more and more distant (and inhospitable) territory?

The difficulties you mention in engineering Mars towards a marginally "livable" clearly are insurmountable, and mostly based on conjecture, instead of proven science. As with nuclear power, my tendency is toward caution. Science, for instance, may yet find keys to unlocking the atom that don't involve enormous deficits of pollution. Wouldn't it be best to moderate our needs, for the time being, so as to let science "catch up"? Why, for instance, should it be necessary to burn up all the oil (and then all the coal), and generate tons and tons of nuclear waste, in order to serve our burgeoning global overpopulation--when, with a little luck, we might find a cleaner, safer alternative within another century of research? Capitalism always desires immediate solutions, and causes untold harm and devastation as a result.