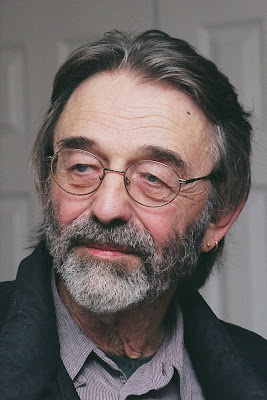 I first ran into James Koller's work back in the late 1960's. His poems appeared in a series of small, unassuming little pamphlets--Two Hands: Poems 1959-1961 [James B. Smith, Publisher, Seattle, 1965; Some Cows, Poems of Civilization and Domestic Life [Coyote, San Francisco, 1966]; and The Dogs & Other Dark Woods [Four Seasons Foundation, San Francisco, 1966], and then in 1971 Black Sparrow Press, Los Angeles, published California Poems.
Some time in the early 1970's, probably in 1973, I wrote Koller a fan letter, something I've rarely done in my life. Koller, in the last-mentioned title, had evoked a rural feeling that struck a chord in my heart--it seemed like a book I might have written, had my life-path taken a turn or two closer to his. I'd grown up in Napa in the 1950's and early 1960's, at a time when the Napa Valley--along with the Sonoma Valley--was on the cusp of an explosion which would sweep away much of the charm and seclusion which had drawn the first wave of post-War Midwesterners and Southerners there. 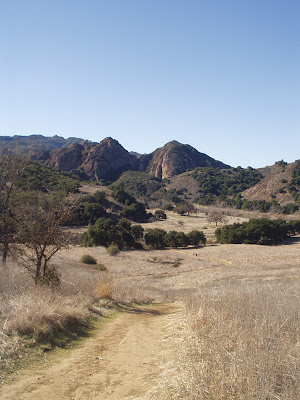 It was still possible, in those decades, to imagine what life might have been like in rural California in the latter half of the 19th Century, and the first half of the 20th--to conjure up an unspoiled countryside of live-oaks and grain-gold hillsides, criss-crossed with stone fences, dotted with well heads, and connected by train-routes. Koller's poems seemed to describe the edges of this world, and though he had come here as a transplanted Midwesterner in the 1950's, his feeling for the California landscape, for a world of semi-rural existence in which scraping along and getting by and making-do had been subsumed into the ambient aesthetics of the then novel ecological-populist movements, and given voice in a poetry that clearly owed more to Ezra Pound and Carl Sandburg than to T.S. Eliot or Wallace Stevens, which seemed to share a common aspiration with the work of Gary Snyder, Charles Olson, Drummond Hadley, Lew Welch, Jack Kerouac, Ted Enslin, Doug Woolf and others of the generation of the New American Poetry. Koller participated in the Berkeley Poetry Conference in July 1965, and would probably have been included in the Allen anthology, if he hadn't been so young (he was born in 1936). In 1964 he started Coyote's Journal, an avant garde little poetry magazine which defined a nexus of voices and concerns that paralleled his interests, and the underground cultural trends of the time; ostensibly started in reaction to the suspension of publication of the Northwest Review by the University of Oregon in 1964, that initial pretext would seem in hindsight to have been largely a symbolic impetus.
What most distinguished it (the work) in my mind, then, and still does, was its sense of integral purpose, in which the life lived, the daily realities of work, love, and immediate sensory data were drawn up into the higher consciousness of meaning and purpose and given force in a most direct and simple style. I find it difficult now to speak of that time, the Sixties, without feeling some of the emotion which characterized it, for those of us young enough (or susceptible enough) to be swept up in the romance--intellectual, political, social--of that epoch. 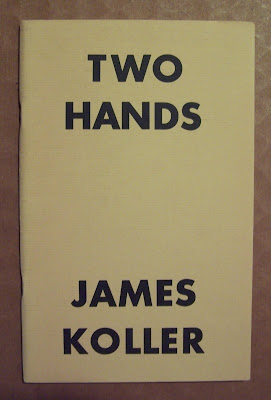 Koller's earliest published works look a little bit like Michael McClure's (with the centered lines and capitalizations), and even sounded like it some:
I RIDE UP & DOWN
on a steaming horse
in a cold rain
before a ploughed but empty field
& the road reaches up
dark in rain
& my horse is gone
I walk in wet shoes
dropping seeds
from an old sack
children walk behind me
laughing
& I can not hear their words
I walk up & down
in a steaming field
the dark ground reaching
pulling at my beard
[1]
The dream-fantasy persona he uses has a semi-rural setting, consistent with the Sixties Hippie Culture of a return to the land, an awareness (or summoning) of ancestral identities (or deities), a faux-primitivistic evocation of animal spirits, the sense of community in shared interest and communal political consciousness. 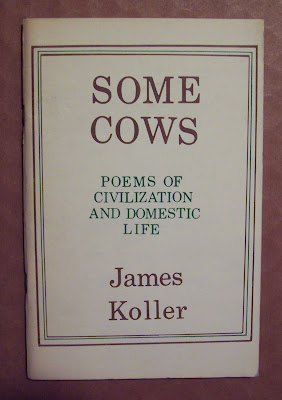 By the time of Some Cows, he'd abandoned the centered lineation and was employing more direct narrational structures:
salt water swirls at the stone
sandstone, an alcove's gentle curves
ridges & hollows, a honey-combed holy place
where I led my daughter, almost a cave
at the water's edge, we sat on our heels
the tide in, caressed the stone
this is the owl's house, she said
[2]
Most of the poems in Some Cows stretch their legs a bit more than this, as the individual phrases and stanzas begin to break up into dialectical islands of assertion, and the authorial presence (voice) becomes interactive rather than soliloquial.
for Charles Hassler & Sally Joe Knowles
who were run down by motor vehicles
March 17th & March 18th 1964
A SMALL CHILD RUN DOWN & A BEAUTIFUL YOUNG WOMAN
O Sally Jo & Charles
dead animals all along the roads
the hawks hungry
tightening their circles
THE BEAUTIFUL & THE ANIMALS
are one with it
BUT THE KILLERS
with their gasoline engines
kill themselves their children their women
& even the earth
quakes can't keep up
the final score
WHAT A BENEVOLENT BOUQUET OF SAND WE GRIND BETWEEN OUR TEETH
why bother with breeding
WE ARE SAVING NOTHING FOR A BETTER DAY
I saw you coming
turning the corner
down to the road
& you were walking
GASOLINE ENGINES TURN TO RUST
turn & rust
SPRING IS A DEEP BURN
& where else there is
no other place
TRY AGAIN TO CROSS THAT ROAD
because we are one with it
we bother with breeding
& keep your eyes open no one
can do it for you
O Sally Jo & Charles
ARE YOU SLEEPING CAN YOU STAND OR BREATHE
HAVE THEY KILLED YOU
engines are rusty flowers
bombs for the beautiful
the hands of death have wheels
a bright pair of eyes that see
NO MORE THAN MAN CAN SEE NOTHING
eyes that see nothing
O KILLER MAN
my grandfather, who was also Irish
& had the nose for it, said he was part Cherokee
my mother, his daughter, is English
& don't you bring home any Indian girls
when the man died, they stretched his body in a tree
this out of Browning, Montana
against the law, the White Man said
we don't want to see anymore bodies in trees
you bury them, like everybody else
the Hawk has an Indian nose
Crow is black because he stole fire
he learned from everybody he ever stole from
Coyote is the color of his own dried blood
[3]
A lot of poets paid lip-service to the trends these poems address, but Koller was one of the few for whom they seemed genuine and immediate. I thought of him in those days--the late 1960's--as being a kind of minor Gary Snyder, not nearly so intellectualized and sophisticated, but rawer and perhaps more genuine--as if maybe Koller wrote the way, and lived the way, that Snyder might have, if he hadn't been a sort of perpetual graduate student in oriental studies. Snyder, of course went on to have a full career as an academic at UC Davis (now emeritus), while Koller seems to have steered clear of the academy. 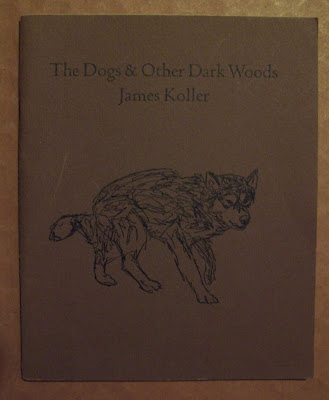 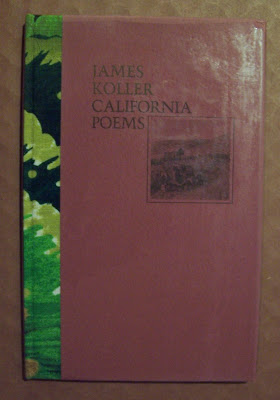 You put your shoulder to the wheel on this one, plus those delicious graphics of the hard won books. A thanksgiving to read.

If we could write as well as those carpenters you talk about in your interview could build, we'd truly be craftsmen to honor. But we keep trying.

Rob. Jeffers did that nearly 100 years ago-- better than the 60s college boys and zensters. Gets old fairly soon (and Pound opposed it, actually..de Rusticus)

Jeffers used classical Greek models, and used up his talent trying to construct archaic dramatic narratives. Does anyone read those anymore? ("No.")

What exactly did Pound "oppose"? No clue.

And you haven't read much Jeffers obviously. At times he wrote on classical themes but usually on the Big sur coastline.

aka the WASP bear j-o-in-the- woods-school. Like you and yr rustic palsies. Scotsmen, usually (tho...Anglos and a few germans guilty of it maybe. Not, say, a Rilke--who understands time, ancient euro streets, sad buildings and monuments, etc).

Do you feel that Jeffers had any real relationship with the society of which he was a part? His "characters" are mostly cardboard two dimensional stand-ins for classical archetypes. At least Steinbeck--to take a parallel contemporary example--made some valiant attempt to re-imagine those archetypes in modern situations--Grapes and Eden are not complete successes, but better by far than Jeffers's stiff-backed rhetorical declamations. I like some of Jeffers's shorter lyrics, but the dramas leave me cold.

They clarify for those with the right ears...or at least souls.

Yes Steinbeck's writing--or F Scott F., Faulkner, et al-- has greater significance than Jeffers, or about any poet, even the klassix. Then, Im not a poet. Id rather read say Ray Chandler, Fitzgerald, ..or EA Poe tales than about any poet I can think of, but EP's Cantos has some zingers (Churchill in the swamp. Heh).