HTML is the language for internet web pages. As such, it is not unlike the ancient Rosetta Stone, in that it provides an intermediary coded "text" which "translates" into a readable format (a "common tongue" language) as opposed to a jargon. Of course, without the technology of a "browser" such a translation doesn't happen. Could someone from an earlier culture--or, from one which had no knowledge of computer technology, untangle this code and make any kind of sense of it? Perhaps. Code-breaking can accomplish amazing feats. 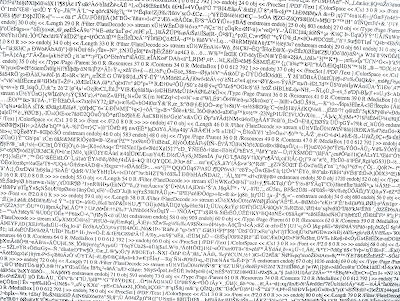 (The image above is a digital photograph I took of part of a page display of HTML language which popped up when I was attempting to load a page from someone's web-site. Apparently my browser got confused and called up this gobbledygook as a PDF instead of the text version it's intended to display.)
Perhaps one would need both the HTML and the corresponding readable portion of any given text to be able to "decipher" it. Perhaps the "browser" is a kind of code breaker. Being able to interpolate from one language to another is in fact a kind of translation. Translators of known languages face precisely this problem: How to know the corresponding underlying meanings of the signifiers, and then transfer this precipitate or alembic into an equivalent language. 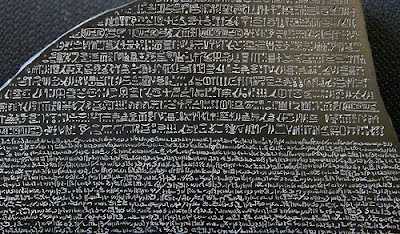 Indeed, though, referring to an underlying "code" as the metaphor for the "gist" of any written text, implies a third thing, i.e., the mental sense which thinkers/speakers have of something, through the screen of any given language. Can physicists "see" phenomena in terms of mathematical language? When Pasternak or Neruda or Szymborska or Rilke call a spade a spade, is it ever the same spade which English speakers like you and I perceive? We tend to think there are large or subtle differences in the way languages describe things, even if those languages are related (as with romance languages). As Frost said, poetry is that which cannot be translated, i.e., that which is "lost in translation."
Is poetry a quality which develops with the immature mind, a process during which complex interrelationships and a deep familiarity are built up, a process which perhaps is difficult, at best, to replicate later in life, or in other ways? It may be possible for children to be raised as bi-lingual, but this process may be possible to certain individuals who retain the ability to acquire new language with great facility, throughout their lives--an aptitude that is not common at all. But is it possible to replicate the intimate familiarity which is acquired during the formative childhood years? It's a ponderable quandary.
The relationship between what is not known about the way language is experienced as a cognitive process, and the significance of symbolic/linguistic representation as only a partially reliable basis for apprehension, comprises the mediated no-man's land which is poetry's specific precinct. Any poetry which does not enter into or partake of this interzone of flux and shifting apprehension, risks being prosaic and doesn't deserve the name. It's the area of dreams and suppositions and irrationality and the unknown, and it's also where words undergo transformation and evolve into newer shades of meaning, where language undergoes mutation and recombinant change, becomes, in effect, new avatars of signification.
It may be, too, that the rebellious child or adolescent mind resists the given cultural paradigms by deliberately (or unconsciously) reconfiguring the language as a way of adopting it as his own, or as a statement of individuality (or alienation). Abstraction in language could be described, in some cases, as a bastion against received sense, or the imposed "wisdom of the past." Attempting to valorize such private (or hermetic) abstracts of language is one way to legitimize one's idiosyncratic separateness or eccentric outlook. The investigations or discoveries in artistic media may be regarded thus as part of a campaign against the collectivization of thought or behavior.
The language of the computer age could be seen, ironically, as part of a process of homogenization or regimentation of human thought and inquiry, or one unintended consequence of the globalization of discourse. Is this to be regarded as a favorable influence, of the democratization of peoples and cultures around the globe, or as an harbinger of a new authoritarianism spawned by technocrats looking to integrate communities into willing customer-bases or to manipulate them for purely political ends?
Are we, as participants in the HTML-based media world of the internet, being subsumed into a global system of organization designed to align us into manageable constituents of the new world order? And if so, what would that order look like?
Posted by Curtis Faville at 9:41 AM

"Any poetry which does not enter into or partake of this interzone of flux and shifting apprehension, risks being prosaic and doesn't deserve the name."

I like this, and I've been lately wondering about the nature of poetry consciousness precisely along these lines myself.Physicist/philosopher Michael Polyani taught that we seem to know more than language can convey: that in a sense we know before we can even begin to verbalize. Nothing better describes this "interzone" nature of poetry. If I can read a poem like a recipe, it's just not poetry: there needs to be the the "abstracts" (as you aptly call them) from which it really comes. Italian poet Ungaretti speaks of the "mystery" the poem asks us to decipher. I think you mean the same thing.

I'm not sure, however, that "code" means the same thing as "mystery". You seem to talking about the poet-machine synergy celebrated by media poets. Advocates of digital poetry often talk of the essentially processual, dynamic & information-rich properties of all programmable & networked writing.I'm thinking particularly of Charles Bernstein's "HTML Series of poems.

Are you celebrating the potential of HTML code for the digital poetics it produces?

As a computer science major, the languages used in programming and formatting languages, is a result of a few non-NWO based reasons. First of all, like any tool, it's specifications are exacting and duplicated across the world. Similarly, how would civilizations rise if not for a few standardization practices? Also, this leaves out languages like LISP, XML, and other flexible languages that allow you to determine the vocabulary and verbs used in its expression.

Secondly, computers are simple machines with complicated structures, You almost have to speak to it like a child, since it can't dynamically adapt to language very well. A small constrained vocabulary is necessary, in which you build on the foundation, bigger and more intricate grammar.

You can only understand me through the mere incidence that we have a small and constrained language (relatively) which enables us to know the same nouns, verbs, and all the other linguistic errata that makes communication possible.