What is now known about the Penn State Football program coach scandal is recorded in the following time-line (from the New York Daily News):

1977: Sandusky founds The Second Mile, a charitable organization designed to help at-risk boys in the State College, Pa. region. Second Mile’s website says that over 100,000 boys and girls from all Pennsylvania counties participate in the organization’s programs annually. Sandusky is also promoted to Penn State’s defensive coordinator that same year.

1994: Boy known as Victim 7 in the grand jury presentment released last weekend meets Sandusky through Second Mile at “about the age of 10,” according to grand jury testimony.

1996-98: Boy known as Victim 5 in grand jury presentment is taken to the locker rooms and showers at Penn State by Sandusky when he is 8 to 10 years old, according to grand jury testimony.

1998: Boy known as Victim 6 in grand jury presentment is taken into the locker rooms and showers when he is 11 years old and showers with Sandusky, according to grand jury testimony. Sandusky lathers up boy and says, “I’m going to squeeze your guts out.” When Victim 6 is dropped off at his home, he tells his mother of the incident and she reports the information to university police, who investigate. Investigators eavesdrop on two conversations between the mother and Sandusky, and after one conversation, Sandusky asks for forgiveness, even telling the mother, “I wish I were dead.” Then Centre County district attorney Ray Gricar ultimately says no charges will be filed against Sandusky.

Summer 1999: Sandusky announces he will retire from Penn State at the end of the season. He will have emeritus status, maintain an office on campus and have access to all Penn State facilities.

Fall 2000: According to grand jury report, Penn State janitor named Jim Calhoun observes Sandusky in university’s Lasch Football Building showers with a young boy, Victim 8, pinned up against the wall, performing oral sex on the boy. He informs janitorial staff members. Employee Ronald Petrosky cleans the showers at Lasch and witnesses Sandusky and the boy, whom he describes as being between the ages of 11 and 13, exit holding hands. Calhoun, a temporary employee, never reports incident.

April 15, 2005: Gricar, the Centre County DA, disappears after a trip to Lewisburg, Pa. His car is later found parked in a lot and his computer and hard drive are found in the Susquehanna River. The twice-divorced Gricar, 59, is never seen or heard from again. “It’s literally a mystery,” Bellefonte Borough Police Chief Shawn Weaver tells the Daily News in 2011. “The man vanished, period. No human trace has been found. There’s only one of three things that could have happened to him — a suicide, homicide or he just walked away.”

2007: According to the grand jury report, during the 2007 track season, Sandusky begins spending time with boy known as Victim 1. Victim 1 stays overnight at Sandusky’s home, and later testifies that Sandusky performs oral sex on him multiple times. Sandusky also brings Victim 1 onto PSU campus even though he was barred from bringing boys to the university after alleged 2002 incident.

Spring 2008: Victim 1 terminates contact with Sandusky, while a freshman at a Clinton County high school, according to grand jury report.

September 2010: Sandusky retires from day-to-day involvement with The Second Mile.

Nov. 5, 2011: Sandusky is arrested and released on $100,000 bail after being arraigned on 40 criminal counts. Curley and Schultz are charged with perjury and failure to report the allegations.

Nov. 7, 2011: Pennsylvania attorney general Linda Kelly holds a press conference. She says Paterno is not a target of the investigation. Curley and Schultz surrender on charges and step down from their posts — Curley goes on administrative leave, while Schultz retires. State police chief Frank Noonan says there are “no heroes” in the investigation. Both Kelly and Noonan encourage other victims to come forward.

Nov. 8, 2011: Penn State cancels Paterno’s weekly press conference. Paterno tells reporters, “We’ll try to do it as soon as we can.” Reports swirl that Paterno will be ousted by Board of Trustees.

Nov. 9, 2011: Paterno announces he’ll retire at the end of the season. Late that evening, Board of Trustees votes to oust Paterno and Penn State president Graham Spanier in an announcement made by Board’s vice-chairman John Surma. Defensive coordinator Tom Bradley is named interim head coach. Riots erupt in the streets, as angry students throw rocks, tip over a TV news van and shout support for Paterno.

Nov. 10, 2011: University announces McQueary, a receivers coach with the team, will not be in attendance for Nov. 12 home game against Nebraska, due to threats the State College native has received.

It has been reported that Paterno was told about a clear incident of child molestation within the jurisdiction of the college athletic facilities in 2002, and that he reported this in turn to his superiors in the Athletic Department, allegedly equivocating somewhat about the severity of the behavior reported to him.
There's been a lot of hoopla in the media over Paterno's firing, Sandusky's arrest, Penn State's damage control, and the probable and/or suggested remedies. It appears there may be several plaintiffs contemplating suits against the college, its athletic department, or individuals connected with the "cover-up."
Let's speculate a little over how this mess may have developed, and how it might have been treated in a more constructive way, from the beginning. Fair warning: I'm not a big college football fan, though I watch professional sports on the media, and have followed professional football most of my adult life--not obsessively, but with some interest. I've been a San Francisco 49ers fan since childhood. Though I attended UC Berkeley and the University of Iowa, I was never much interested in their respective athletic programs or teams. 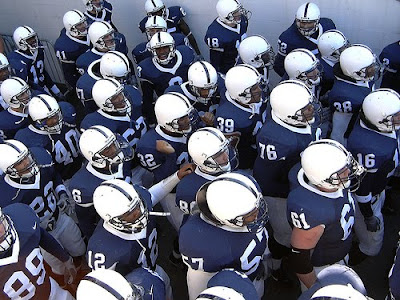 I have mixed (unresolved?) feelings about the violence associated with severe contact sports like football. As an adolescent, I didn't possess the physical strength and stamina to pursue heavy contact sports, and by the time I did as an adult, I was well beyond the point at which I might have engaged in such activities. You have to be driven, as well as physically capable, to play football or even basketball competitively at the high school or college level, and I was never motivated sufficiently in that direction.
Nevertheless, like most Americans, I have some interest in professional sports, and vicariously participate (as a fan) in the excitement and interest which the competition generates. Am I a little less than proud of this interest? Do I think I could spend my time more wisely? Do I have some personal stake in the perpetuation of the big money generated, and serious risk of injury, which are integral parts of professional football? Without a doubt. Much of what people do isn't rational, or practical. Professional sports is an entertainment. People crave it. Ultimately, it doesn't do society much good--despite the claims that are made for its charitableness, or the building of character, or as a demonstration project for the teaching of courage, cooperation or other supposed personal values. 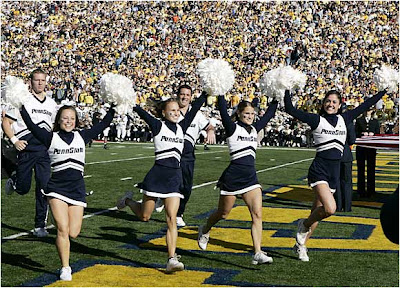 Over the 20th Century, college sports grew from a modest pastime into a very big business. The division between (amateur) college and professional sports has become very vague indeed. The system of "athlete scholars" is mostly an open joke in our society. No one believes that college athletics is designed to turn out "well-rounded" individuals who improve their bodies along with their minds. That's all become a myth, if it ever had any validity to begin with. As fas as the career potential of college athletics goes, precious few of those who participate realize any permanent return on their investment. For the major market teams, college players are participating, unpaid, in a financial investment scheme designed to exploit them for the benefit of the institutions they nominally "attend."
The value of such programs to the financial stability of the institutions which run them, especially in a time of scarcening public resources for state supported schools, is obvious. Penn State receives tens of millions of dollars each year from its football team revenues--ticket sales, promotions, and media contracts. Would a wholesale repudiation of such support bring about some useful "cleansing" of the conscience(s) of the colleges which participate in this system? Having allowed this system of support to grow into the huge money machine it now is, should it be dismantled because of a minor morals scandal at a single institution? 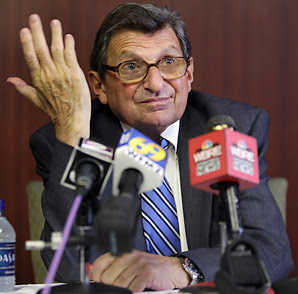 the media just tracked down the kid in the shower who is now 20 years old. this kid said this never happened!

that when (especially) a male give the kid a low grade or disciplines the kid for some reason the kid then
threatens the teacher with "he 'touched me inappropriately'" and then get her friends to swear that
similar things happened to them. the teacher is then lynched by the media no trial or outcome is ever
reported
very day is another one of these events is NON-STOP on the news...

I tend to agree about the media.

The Penn scandal is clearly a media event, not a real issue that the electorate needs to concern itself with.

In a democracy, we think the media are there to keep us informed. Nah, they're just trying to make a buck, like everyone else. They'll feed us whatever they think will sell the most papers. Otherwise?

Lutherans would have reported it directly to the police. I have to wonder if the mob wasn't in some way connected with Sandusky's program, and that this is how the DA disappeared so conveniently. He has to have been whacked.

Paterno, a Catholic, may have had some sense that Sandusky (who was apparently pimping kids to high-profile donors) was engaged with a much larger apparatus. The program appears to have been grooming children as a kind of brothel for high-profile people.

Paterno probably knows more than he's saying. The key is to find out who whacked Gricar. Gricar's computer was thrown into the Susquehanna River (a fairly sluggish river) and although the hard drive was later discovered by fishermen, it has not yet been able to be deciphered with the exception that they were able to determine that someone had done a search on it about how to scrub a hard drive.

What anonymous says is also important. We can't trust what people say to the media. It may be that Cain's accusers were only attempting to cash out.

It may be too that some of Clinton's accusers were merely attempting to cash out.

No one really knows. This doesn't mean that genuine crimes can't happen against children or that we shouldn't do everything we can to shield them from jerks.

The bit about providing kids to donors I hadn't heard. Where does that come from? These charitable organizations are frequently implicated in exploitation. I guess we need to be cautious--if not suspicious--of them.

I think Paterno must have known, and weighed his options. Quite likely he confronted Sandusky, who begged him to keep quiet, which he did, but not for friendship. For keeping face.

The thing about pimping out kids is based on a rumor a columnist in the area heard. I forget his name now. Michael Madsen, perhaps. Something like that. The organizational chart of this whole crime organization has yet to be plumbed in anything like its amazing iniquity, I'm afraid.

"For nothing is secret, that shall not be made
manifest; neither any thing hid...." as per screepture. Or in other words....grazi for evidence

"we are descendant from apes...we must love one another" (para...vladimir solovyov)