Today we tend not to appreciate how powerfully WWI affected the generation of 1917. Gertrude Stein called it The Lost Generation, and the moniker stuck, because it was true. The tragedy of WWI has been overshadowed in our consciousness by the horrors of WWII, and The Holocaust, but for mass killing and suffering on a grand scale, World War I was perhaps the most devastating event, certainly, up to that time, in European history. The means of efficient firepower had overtaken the theory and practice of war--of battles carried out as if the military strategies of the Napoleonic Era still applied--and the young men who surged onto the field of contention in France were mowed down with incredible despatch. Ten millions of soldiers lost their lives. 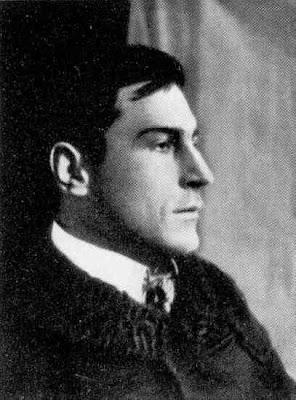 It was inevitable that "the flower of its [Europe's] youth" would be included in that number, depriving the world of untold resources of knowledge, talent, energy and invention on an unimaginable scale. It would be, in sheer numbers, if there were to be a war today involving the nations of Europe and the United States, as if 40 million young men between the ages of 17 and 40 were to lose their lives. We tend to see casualties in our time as including more civilians, because battles are no longer fought gallantly between armies arrayed against each other in discretely defined precincts; we live in a world of "total war" in which everyone in a "zone" is at risk.
But in World War I, the ultimate "war game" was played out on barren agricultural and forested country, and armies contended over muddy, pock-marked wastes strewn with barbed wire and clouded with poison gas and cordite. Mounted cavalry was still the order of transport, though early tanks and fighter-planes participated. Huge forces faced each other across a "no-man's land" between long crudely constructed trenches. Men died by the bushel. A company might be ordered "over the top" for a charge, and a half or three-quarters of its number be mowed down by machine-gun fire within 45 seconds. That loyal, honorable men did so is a tribute either to their fortitude or their naiveté. 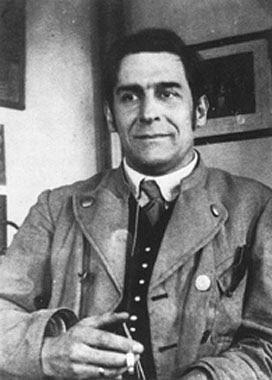 The German painter Franz Marc [1880-1916] was among those who lost their lives in that conflict. Though born in the late Victorian Age, by the end of the first decade of the 20th Century he had already produced an impressive body of work for which he's been remembered and studied. Looking at it now, through the retrospective lens of aesthetic regard, it's easy to see how his work relates to the development of early Cubism and German Expressionism. Comparing and contrasting such trendy aspects, however, may cause one to overlook more original qualities in an artist's work, than those he may share with his contemporaries. 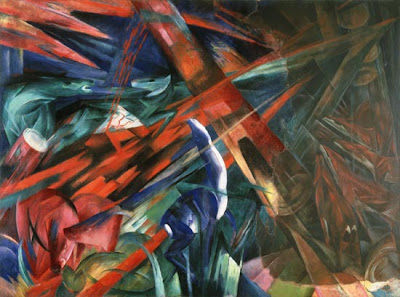 Marc's most famous canvas, the "Fate of the Animals" (above) apparently was a nightmarish vision of the coming conflagration of the war. Its jagged, razor-sharp daggers and fiery projectiles seem to come from all directions at once. Studies of animals were a predominant theme in Marc's canvases, and you can make out horses, dogs (or wolves), and deer in this picture, along with the cannon, exploding fragments and spilled blood. Cubism has been seen traditionally in art history as a means of expressing a novel, ingenious aspect of multiple angles of view, or of creating linear or massed tensions within the confines of a composition. But here, the searing geometric diagonals and vectors have a clearly metaphorical meaning which is at one with their implication.
In Guernica, Picasso used a simplified, pictorial cartoon out of his own late Cubist style, to memorialize the tragic events in Spain (his native country). But he was clearly not the first artist to use abstraction in this way. The absence of human bodies in most of Marc's pictures does not vacate the power of his vision. The idea of evoking pain and suffering through the use of animal casualty seems much more original in Marc, than it does in Picasso's large, somewhat self-consciously pictorial canvas.

But the significance of any artist's work is not limited to how immediately or powerfully he may react to catastrophic events in the real world. Within a five or six year period prior to World War I, Marc created a series of color nature studies which look as revolutionary, to our eyes, as anything being produced anywhere, at that time, in France, England, or Germany. New developments in the use of spatial manipulation, color and form were being proposed and shared rapidly in those years; and Marc's compositions seem to fit right in with our understanding of the developments of that time. 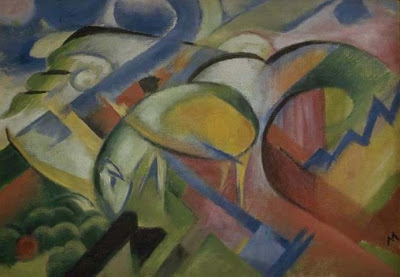 What, then, if anything, makes them different or unique? 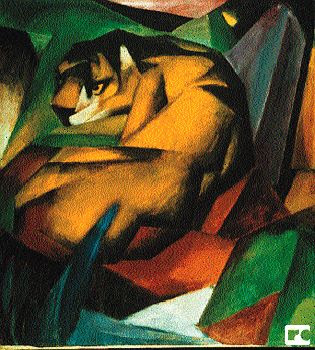 What are the significant differences, for instance, between this forest study of Marc, say, and 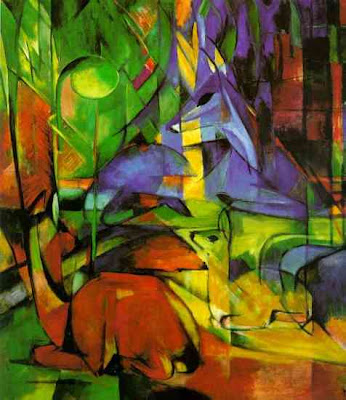 this pastoral by Braque (from 1908)? What I see in Marc's canvases, generally, is a powerful formal torsion, or con-torsion which binds all of the elements of the scene into a powerful vortical, inertial whole. While the individual objects--trees, sky, shadows, animals, rocks, foliage--may still retain their integrity as objective forms, they're all linked in to an interlocking atypical grid of centripetal force--as straight or curving lines of force--which pass across textures and space, sometimes coincident with the natural edges of separation between things, or cutting right through them. 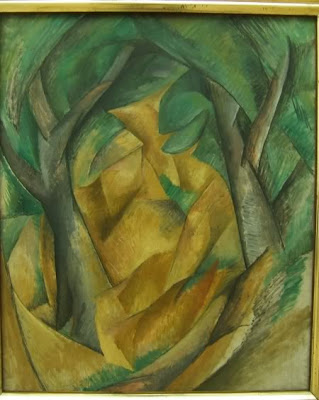 Marc's festive panorama of spectral variation can seem merely decorative, until you begin to piece together the integral relationships. The geometric torsion of arcs, triangles, spheres, and parallels dominates the elaboration of forms, drawing them into a deliberate fantasy-narrative of meaning, augmented with sharp, pure intensities of color. 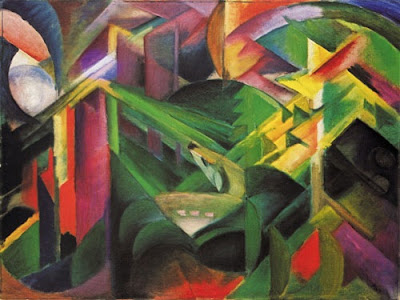 This kind of seeing may obliterate the subject matter by insisting upon its conformity to a ruling principle of design, and this may be one of the dangers of abstraction generally, that it manipulates the subject in ways which may ignore, or disrespect its inherent values--either visually or by eccentric association. 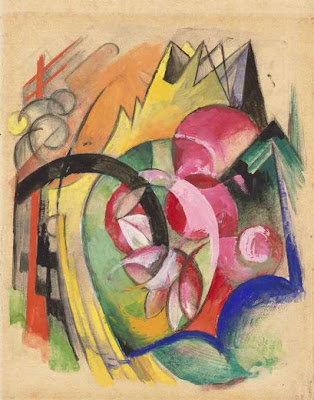 Such distortions may be pleasingly playful (as the above landscape is), or amusing, like the syncopated jumble of percolating variations across the graph of space in the picture below. What state of mind, one might wonder, would one be in to see a natural or agricultural landscape populated with animals in this way? And what, other than its dazzling decorative potential, might it suggest? 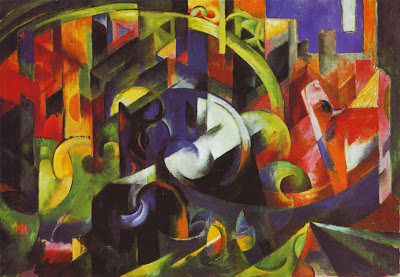 Is aesthetic space superior to the reality we experience in the ordinary world of our five senses? We know that under no circumstance can we occupy a space in which red and yellow nudes recline in a landscape of charged primary colors and organized wild forms. So the justifications for distortion and augmentation of otherwise "familiar" objects must come from desire and capricious will. 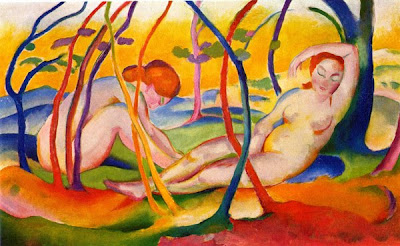 Meaning in Marc's canvases occupies a place about equidistant from reality and playful folly. The world he creates is one where the principles he perceives about things, or things in a space, are allowed to unfold and dominate, interact and bleed into one another, sharing color, line, by mere proximity. A green bird may of course have a scarlet beak (perhaps in Nicaragua or Brazil), and his tail feathers may meld in with the tropical foliage of his native habitat. But the tropical metaphor may only be an expedient pretext for such liberties with simulation. Germany doesn't have tropical jungles. 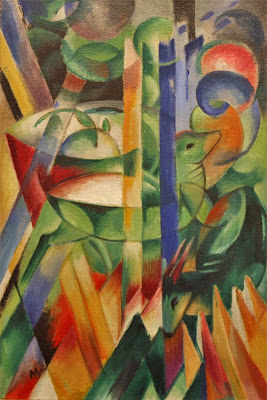 Any artist must accept the consequences of any extremity of exaggeration. Indulging in distortions for purely artistic purposes (as with extreme degrees of abstraction) may summon up the indignations of impatience.
Marc's famous purple horses are among his most canonical images, and are usually offered as the clearest example of his art. Their sensual rumps, flanks, necks, arched backs offer plentiful ground for the delightful curves and ovals and flexible bends which he sought to express. 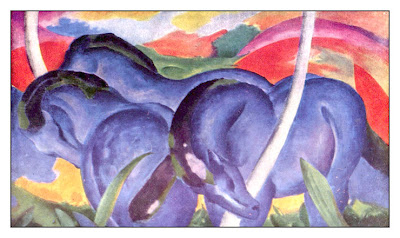 As Abstraction--as an approach to the purely decorative arrangements of two-dimensional space--progressed through the 20th Century, many artists dropped the pretense of interlocking object-arrays and treated form and color as if they were neutral principles, without reference to any specific, separate thing.
The canvas below, painted before World War I, seems to me every bit as joyous and unfettered and nonrepresentational as anything done during the 1950's, the 1960's, or the 1970's. Pure forms cavort across a mixed puzzle of disconformity, a kind of unreconstructed animadversion. Had Marc not been rubbed out in 1916, what wondrous forms and arrangements might he have made? Alas, such speculations lead nowhere. We have only what we see and can deduce from the evidence he left. 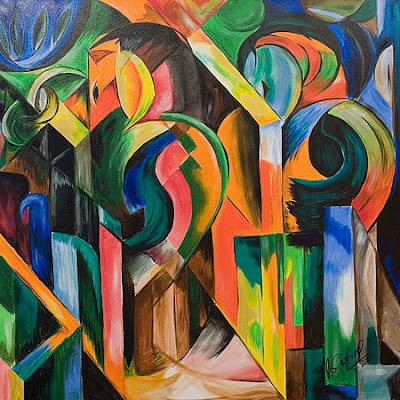 Thank you, Curtis, for again introducing me to the work of an artist of such significance and creativity. Very very exciting paintings. I also appreciate your thoughtful reflections on WWI and the tremendous loss of humanity and talents such as Marc's. What a sorrowful shame.

thanks also from me for the introduction to Franz Marc. What an extraordinary talent!

Your presentation of his works raises (in my mind) some reflections on the nature of 'representation' in art, especially 'cubist' or 'expression' art. When artist, audience & an intended effect (like a 'feeling' about war) form conditions of an artwork, it's sometimes hard to separate technique from what's being represented. Does brilliant 'cubist technique' in "Guernica" represent perhaps one of the most horrific bombardment images in the last century? Or is it just brilliant cubist technique? Do ingenious uses of "multiple angles of view" and "linear or massed tensions within the confines of a composition" merely subtend the work only? Or are they to be considered separately as well?

I can't help seeing, in other words, a work like "Fate of the Animals" without being conscious of the irreconcilability of artistry and intended (representational)effect. Artworks as brilliantly arranged as Marc's try to communicate individualized emotions. I also think it's precisely their integrity as artworks that's comprised by too much attention to principles of "torsion" or "lines of force". You've admitted to that danger yourself: "This kind of seeing may obliterate the subject matter by insisting upon its conformity to a ruling principle of design, and this may be one of the dangers of abstraction generally, that it manipulates the subject in ways which may ignore, or disrespect its inherent values--either visually or by eccentric association."

It's my concern in general with people like Warhol, Escher (in art),Berio (in atonal music), and Yvonne Rainer (in experimental dance).It seems we're still stuck, with the Aristotelian bugbear of the nature of representation in art.