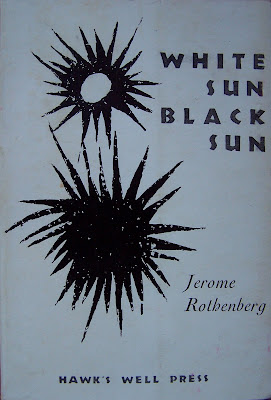 Jerome Rothenberg [1931- ] has accomplished a good deal in his lifetime. Aside from being a unique and interesting poet himself, he's edited a series of anthologies highlighting not only the American avant garde, but the literatures of cultures around the world, linking the common efforts of writers from diverse backgrounds, over long stretches of time, and facilitating the cross-fertilization of ideas and forms across borders and barriers. But his beginnings were relatively humble, if, in retrospect, auspicious.
One of my favorite poems from the post-War period is the lead (or "title") poem from his first, self-published, pamphlet, White Sun Black Sun [New York: Hawk's Well Press, 1960]. Published in the same year as the Allen Anthology, New American Poetry 1945-1960 [New York: Grove Press], it's only 30 pages long, and has a certain Germanic cast, with echoes of, for instance, the work of Paul Celan. A symbolic, deep imagery predominates. Ikonic "universals" are manipulated in dream-like sequences. There is no overt evidence here of the explorations of Jewish identity [Poland/1931, Unicorn Press, 1970], or the explorations of form [Conversations, Black Sparrow Press, 1968], or the interest in primitive/tribal cultural artifacts [The 17 Horse Songs of Frank Mitchell, Tetrad Press, 1969], which would characterize much of the work of his earlier period. Again, the driving influence seems to point to those German poets Rothenberg had translated [Young German Poets, City Lights Books, 1959]--Celan, Grass, Enzenberger--for Ferlinghetti's Pocket Poets Series.
Poets' debut books often present either as ironic counterparts to their later careers, or as perfectly consistent prefigurements. Consider William Carlos Williams's first self-published book Poems [Rutherford, NJ, 1909], which, had you read it contemporaneously, would have held no clues whatever to his later accomplishments. Or Wallace Stevens's Harmonium [Knopf, 1923], published when he was in his early forties, which already feels triumphant in its mature command of materials--of which his later books seem almost an elaboration.
Had Rothenberg not been the impatient, curious explorer, his career might have developed along fairly predictable lines. But the Sixties exploded a number of traditional modes of professional literary presumption. What kind of poet might Robert Bly have become, for instance, if he had not confronted militarism, the counterculture preoccupation with sexual identities, and the poetries of South America and the Middle East and Scandanavia? Silence in the Snowy Fields [Wesleyan, 1962] shares a number of concerns with Rothenberg's White Sun, though the divergent paths of their respective careers tells us not only how fragmented the poetry culture would become in America over the succeeding decades, but also how similar (and cohesive) the poetry scene had been at their mutual beginnings [circa 1955-59]. The careers of both these poets benefited from a wide exploration of different literatures, as well as investigations into personal history and psychology.
But in 1960, this was all to come.
The pre-face to Rothenberg's pamphlet comes directly from William Blake (The Marriage of Heaven and Hell, 1793]--one of his prophetic books-- 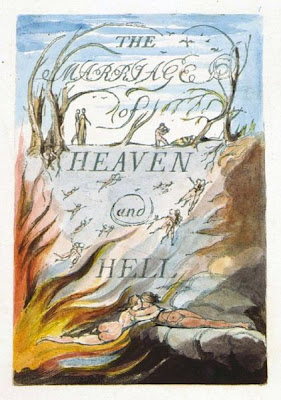 By degrees we beheld the infinite
abyss, fiery as the smoke of a burning
city; beneath us at an immense dis-
tance was the sun, black but shining;
round it were fiery tracks on which
revolved vast spiders, crawling after
their prey, which flew, or rather
swum, in the infinite deep, in the most
terrific shapes of animals spring from
corruption; and the air was full of
them, and seemed composed of them.
These are Devils, and are called powers
of the air. I now asked my com-
panion which was my eternal lot.
He said: "Between the black and
white spiders."
Blake's appreciation of the rhythms and literary styles of the King James Bible [1611] is reflected in his own quasi-prophetic linguistic expression. Indeed, the Biblical qualities in subsequent epochs of literary production is a whole field unto itself, and far beyond the range of my interest here. Suffice it to say that I see in Rothenberg's poem, a lineage of phraseology which though secular in content and purpose, employs rhythms and rhetorical turns which derive from that tradition. Rothenberg's poem is taken directly from the title of a Blake poem, but it may be unclear which poem/or poems Rothenberg's piece refers to. There is Blake's poem A Little Boy Lost (quoted below)-- 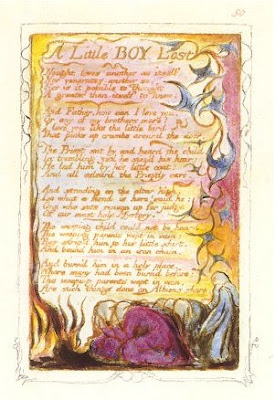 Wonder how much access Blake had to Goethe. My dad grew up able to recite this poem in both German and English.

what's funny is how Blake's sunday school hymns became the manifesto of the beatskis--rather ~(sunday school). What did Joyce (as in James) say of Goethe & Co, sturm und drang? Donner, blitzen, etc. Nietzsche sort of changed that romantic Weltanschauuuung--at least FN was an honest nazi.

Blake's poems are much more complex and ambiguous than his readers often imagine.

It's a simple mistake to see his work in the same light, say, as Dickens--criticism of societal corruption or class struggle.

Blake's dilemmas are much more tortuous and not at all synthetic--he doesn't give us easy answers.

The ambiguity of the Rothenberg poem is one of its strengths. It's unclear what the thrust of the argument actually is.

Blake's themes might be somewhat complex at times (usually, related to the problem of evil chestnut). The forms aren't. Rev. Blake may have had a good heart but he's another low-rent Milton. Dickens a bit richer (and with a better eye for well, societal corruption and class struggle)

Have you seen any of the Blake's manuscripts in person, Sir F.? They have a few on display at the Huntington museum. Rather intense--Blake did all the engraving/printing as well, and in those days had to do it backwards. That said, I'm not sure the accusations of... WB's madness were entirely unfounded.