I initially thought to begin this piece as a straight review of Philadelphia poet CA Conrad's collection The Book of Frank [Seattle: Wave Books, 2010]. The title had been rumored to be--or quietly announced as--in-the-pipeline at Jonathan Williams's Highlands/Jargon Press for quite some time, and given Williams's unusual and unpredictable tastes, it was worth wondering just what had impressed him enough to take up this then as-yet obscure young Philadelphia writer's work. But The Book of Frank never appeared from Jargon, and Williams died (apparently) before he could realize this project.
The book did finally appear, from another publisher, and I located a discarded review copy at a local used book emporium last month, to curiously inquire of it what it consisted. Ron Silliman had praised Conrad in his blog on several occasions, beyond the usual regional or personal obligatory gestures, though it appeared clear, on the slim evidence of the few quotations of Conrad's work I did read, that he was not a formal innovator, but a writer whose primary interest was in the projection of a conflicted self, seeking to overcome a set of natural disadvantages which fate had placed on his shoulders. His personal avatar--"The son of white trash asphyxiation, my childhood included selling cut flowers along the highway for my mother and helping her shoplift. I am the author of several books of poetry, and I am a recipient of a 2011 Pew Fellowship in the Arts for poetry"--seemed calculated to evoke an empathetic reading, the usual ring of the confessional stance, familiar to readers of American verse throughout the post War period.
Confessional poetry has a range, from high to low condition. At the top end, you have Lowell and Seidel, gnashing their teeth over the curse of privilege, and at the lower end, well, you have people like Bukowski and Peter Orlovsky, wallowing in degradation and smut. A poetry which depends for its effects upon the vicarious curiosity of its readers about the shockingly different or sadly tragic personal lives of its writer(s) is bound to be distracted by the personal narrative, from other purely formal questions. It's as likely to be about dramatic action and theatrical performance, as it is about intriguing ventures into technical practice--no matter whether it's celebrating a conspicuous consumption, or the enlightenment of self-denial or involuntary deprivation. Everyone has at least one story to tell, though the accounts of middle class poets are almost always less diverting than those at the extreme ends of the social, economic or political spectrum. It can be confusing, too, when the rags-to-riches (or from obscurity to fame) cycle, goes full circle, putting the once-destitute freak into the lucrative limelight, or the spoiled scion of wealth manages to squander everything in a devoted pursuit of the flowers of evil. In CA Conrad's case, the initial emblematic self-deprecation (a low mimetic) is one in which the individualized plight is romanticized as a poetic profile--as in the Blakean sense where salvation is achieved through devotion to a higher good (such as artistic aspiration). Childhood is a Platonic state in which influences and conduct are imposed by an evil society (a la Dickens), and the child's salvation lies either in the altruistic intervention of a superior beneficent power, or through some inspired initiative (such as art or religious application). 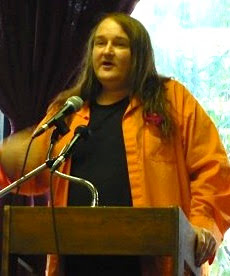 Conrad's physical being--of a bloated, effeminate, slightly skanky queen--is foregrounded as a symbolic projection of its own hopeless quandary. If art is about beauty and grace and control, then such a fallen state of affairs can only inspire pity or amused indulgence. But of course art--and much religion--is also about the salvation of the forsaken. The poet Larry Eigner, born physically deformed and impaired, was saved by a familial care and attention which allowed him to generate a body of significant work over a lifetime of productivity. One's deeper proclivities may be concealed behind or inside a contradictory body, leading to a desperate pursuit of ways to validate that difference, to be accepted for who one is, or would choose to become. Art as self-transformational or redemptive vehicle. 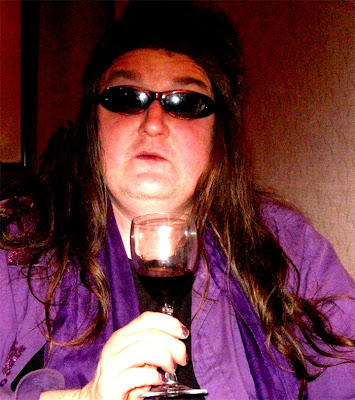 "The "Frank" of the poems is a personification without any specificity..."

I'm tempted to see "Frank" in Frank Samperi whose theory of "difference" had been long articulated in Samperi's "Lamentations" (1964-65 unpublished diurnals), and is a primary principle of his entire poetics, and whom I know CA Conrad had not too long ago exuberantly praised.

There is, of course, no nexus between CA Conrad's hilariously gay exuberance, almost too stale and overused these days to get much serious attention, and Samperi's own essentialist Dantean beliefs.

As for CA Conrad's poetry, bloated, and just screaming for attention.

Fastest man on the draw!

one of these days
I'mmmmmm
gonna be

come one of ten

however, I wouldn't want to
die there.

as for this Eileen Myles...

what the hell does she know about Surrealism ?

This review is unfortunate. Too dismissive and judgmental -- just plain mean in a personal way -- to be a real investigation of Conrad's poetry.

So you found "a discarded review copy at a local used book emporium." Was it really "discarded"? Are you sure it wasn't sold?

When I worked at a used book store, reviewers came in frequently, selling boxes full of review copies of books of every quality.

Do you consider all of the books at a used book store to be "discarded"? Should I never even check those stores for good books because every book is bound to be bad because only "discarded" books wind up there?

The first response to this is to ask "have you read the book?"

Book reviews typically are intended to send someone to the book, or to present an opinion or judgment about it for someone who is familiar with it. It's a combination of criticism and possible recommendation.

CM Conrad's reputation was, until quite recently, an underground rumor. He was frequently mentioned on Silliman's Blog as an important up-and-coming poet in the Philadelphia area. Mr. Conrad himself makes no bones about his agenda, which is front and center on his own website, and in every comment or statement of his that I have seen online or in print.

I was frankly curious to know what his work was like. As I mention, Jargon Press had been rumored to be going to publish his Frank Poems, but then it got delayed, and eventually came out under a different publisher. So I thought: Alright, I'll give it a shot, to see what the hoopla was about.

My review is a frank response to his work, unclouded by any personal animosity or prejudice. I've never met the man, and it may well be that if I knew the man, my opinion of him--based solely on his work--my be somewhat different. But I was reviewing the book, not the man.

In Conrad's case, however, the "man" is very much a part of the poetic persona the work presents. He (the author--the authorial voice--demands to be taken on terms which are radical, and in my view, somewhat confused.

Any review copy which one finds in a bookstore is, by definition, discarded. If a reviewer finds s/he wants to keep a review copy, that would suggest that it's been retained. If sold within days of publication, I would venture to conclude that it's been discarded, perhaps just one more in a batch of such copies.

Review copies--those issued as such by publishers--frequently do have value on the secondary market, despite their typical posted warning that they're not to be sold or traded. I would be the last person to suggest that they're somehow uniformly without value, or that going to used bookstores is a waste of time. I am, after all, an antiquarian bookseller myself.

If you disagree with my assessment, then read the book yourself and offer a contrary opinion.