From the Gallery of Heroes - Beatrix Potter 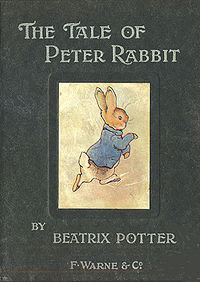 As an only child (until the age of 13), growing up in the 1950's in suburban California, I was the focus of my parents' expectations regarding my future potential as a well-rounded adult. As "respectable" lower middle-class Midwesterners who had grown up before World War II, they were raised in an atmosphere of deprivation and social embarrassment, which they thought of a a normal state of affairs. Nevertheless, following the prevailing social mores of the time, they believed that reading to children constituted almost a christian duty, something good for its own sake, and a crucial element in juvenile education. Perhaps this is one reason that reading had so official and important place in our sense of daily life; it was something you could do in privacy, and it didn't involve any interaction with society. Reading, as a form of cultural enrichment, was a discipline and a pleasure all parents should strive to pass on to their children. They had both been avid readers in their youth, though my mother tended to read books less often as she aged.
Hence, from the age of 3, I was introduced to the world of juvenile literature, mostly by being read to, out loud, on a regular basis.
Among the many titles I was read was Beatrix Potter's classic children's story, The Tale of Peter Rabbit. Like many children, I learned the words to stories by heart, through repetition and emphasis, and could anticipate nearly every sentence or phrase as it was read to me, as I was encouraged to do. As each page was turned, and I saw the illustration, I would begin to speak the next sentence before Dad would say it, a kind of anticipatory proof of memory, and interest.
A lot of stories for children are "softened" to make them less frightening, but Peter Rabbit, like the Pooh stories, or Raggedy Ann, weren't particularly strong stuff to begin with. I'm not sure why, but I rather imagined as a child, that the author, Beatrix Potter, must be a late middle aged matronly sort of woman, modest and reserved, perhaps even a bit smug. But I was surprised to learn, looking her up lately on Wikipedia, that she was a rather liberated 19th Century woman, self-supporting, forward-looking, with wide interests, an active life, and a great talent for writing as well as drawing and painting.
There are artists who lead lives of outward simplicity, but whose inner life is busy and fascinating. Then there are artists (or writers) whose artistic endeavors are but one facet of a varied personality. In Potter's case, her art work and her interest in biology and farming and (what would one day become known as) "ecology" (conservation) were melded into an integrated life of purpose and value and meaning. Upon her death, her considerable real estate holdings in the Lake District were donated to the National Trust, and her land became the basis for the Lake District National Park. But my purpose in addressing a child's tale--a genre which some of my readers may think I fail to appreciate, based on my criticism of Tolkien and Rowling--is to explore the feelings this story inspired in me as a small child.
I have reprinted the whole story here--without most of Potter's exquisite illustrations--since it's such a model of economy and concision. Rhythmic language and the characteristic intonements of grammar and syntax are employed with great subtlety, to manipulate a child's emotions in ways that are powerfully persuasive and effecting.
Critics of children's literature have observed the division between some of Potter's illustrations, and the course of the narrative text. But that kind of observation isn't something that would occur to a child to notice. I'm not sure why children accept anthropomorphic projections with such ease, but I never saw anything unusual about dolls or animals having human characteristics, such as higher cognition or the ability to perform complex human movements. Animal or doll characters become stand-ins for the childhood identity projection, they live through these personifications, and experience their world as if they were living inside the character's bodies. Their travails and pleasures and perceptions become theirs, and they suffer or delight right along with them. 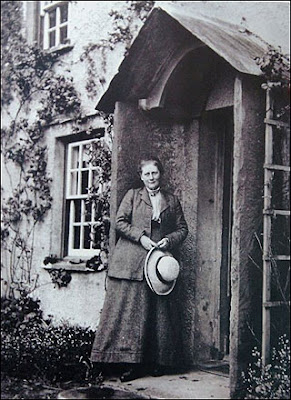 your "Peter the Rabbit" is (certainly as I read this) emblematic of a childhood literacy ideal that's perhaps all but vanished. "Harry Potter" (pace its faithful followers) is really a craftily engineered validation of the usual Hollywood "idols of the tribe": personality, spectacular "effects" and life-sequences reduced to "sound-byte" narrative. Ted Striphas (in his "The Late Age of Print")refers to "Harry Potter and the Culture of Copy". Zizek's made the interesting point that Rowling's spectacular success can be due to a type of "political" engineering purposely made to deal with a single-mother crisis in the U.K.

What a contrast to an age of "Peter Rabbit" and my own "Hardy Boys" series, which I devoured as a child and that too enjoyed a similar "Harry Potter" fame except that the book (imo)couldn't have been as heavily "mediatized" and was bound to be more highly prized as a more significant "cautionary moral tale" suitable for children.