Two on the Aisle 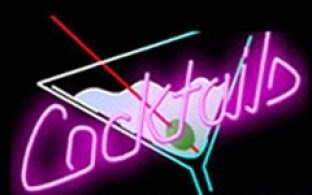 One commenter recently accused me of being a lush. Alcoholics Anonymous generally recommends that people who have a weakness for alcohol addiction, refrain from all intake--to go cold turkey forever.
Most people who do some drinking regularly must address the issue of their possible addiction. In my experience, serious or addicted drinkers care less about what they drink than they do about reliable intake. In addition, serious addicts usually are compensating for something in their lives; the alcohol is a crutch which allows them to relax or cheer up, against depression or frustration; and then, the alcohol itself becomes part of the problem, or the major problem in your life.
I grew up in a household of addiction. Both my parents were heavy smokers--two-pack-of-unfiltered Camels-a-day smokers. The house had an oppressive odor, my parents had yellow teeth and yellow eyes, and yellow stains on their fingers, and there were ashtrays (and old grey ash) everywhere. Both had "smoker's cough"--a wretched, bent-over hacking cough that never went away. Both of them died, having lived their whole adult lives as nicotine addicts. But they were adamant about my not starting, and, watching their travails, I had no desire to start myself. Being around addicts also taught me about the self-justifications, the excuses and complacencies people invent to allay their sense of guilt or fear for their health. It isn't pretty.
Though I never took up smoking, and did no more than try marijuana briefly in the 1970's, I do drink coffee, and wine, and spirits. I drink coffee nearly every day. In the past, to prove my independence from it, I have gone off it for months at a time. Though both my parents were classic "addictive personalities," I myself have no tendency in that direction. I think you "know" when you're addicted to something. When I go on field trips, I feel no sense of loss or need. Like sex or a desire for sweets, alcohol is a pleasure, but I don't need it all the time, and can do without it without any secondary consequences. In my 20's and 30's and 40's, I occasionally drank wine. In my 50's I began to sample single malt scotches, more as a hobby than as an indulgence, and began to have fine wine with dinner, frequently when eating out, and in the last 10 years, I've been on a campaign to mix many different kinds of cocktails. It's a hobby. The inebriation isn't the point, as I rarely have two. At 6'4" and 250 pounds, one drink has almost no effect on me at all. I could give up alcohol entirely and not feel any psychological or physical consequences. I exercise regularly, and eat very well, if a bit too much.
A lot of people will say that anyone who drinks alcohol regularly is an alcoholic. This is obviously not true. They will also say that anyone who makes a fetish out of a habit, is really addicted to the habit, and that whatever they may say about that habit is therefore a self-serving excuse-making lie. That is also obviously not true. You can't equate ethical innocence with teetotaling, it simply doesn't stand up to scrutiny. But I'm aware of the risks of over-indulgence--they're the same for everyone. Addicts know they're addicts--if you are one, you know it, and that's the truth.
In any case, addressing the issue of alcoholism, honestly, is something anyone who drinks must do. Alcohol addiction takes two forms, usually in conjunction: Psychological dependency, and physical dependency. Those with the serious physical dependency usually end up with very serious health problems. Those with psychological dependency may have a better chance to conquer the condition, but the risks to their lives are as great as those for "chemical" alcoholics. I may decide at some point, as I grow older, that drinking spirits is too great a challenge to my physiology. In the meantime, I take it in moderation. Having more than four drinks in a week is probably just a bit too much, but less, given my size and weight, presents no problem.
Here are two concoctions I came up with recently. The first was invented in my home bar. The second was invented on the fly at a restaurant recently. You can't be as creative when drinking out, since most bartenders either don't have many different ingredients, or are too lazy or impatient to follow new recipes. The whole point, it seems to me, with mixed drinks, is to experiment and discover new combinations, but there are many people who insist on having the same drink over and over. There are people who've consumed thousands and thousands of dry martinis without ever even having tried anything else. Kind of unimaginative.
At some point, I'd like to publish my own collection of cocktail inventions. There are a lot of books like that, in print and out, but most of them simply repeat the classics and timidly suggest "variations" on these. From time to time there are attempts to revive the classic era of cocktails (the 1920's during Prohibition), but the associations of that effort would seem to beg the question. Cocktails aren't about being naughty, or irresponsible. They're just a pleasurable libation, good with or without snacks or food.
#1 - by proportion as always
3 parts gold rum
2 parts watermelon liqueur
1 part Goldschlager
1 part aquavit
juice of 1 lime
#2 - makes one drink
3 parts dark rum
1 part Triple Sec
3 shakes Peychaud Bitters
--both served up without garnish. They're both heavenly tastes, and worthy of being repeated. Nevertheless, I'm too curious and adventurous to do that. I'm already conjuring different combinations!
Posted by Curtis Faville at 6:50 AM

you're in good company: Proust couldn't get through a day without his coffee and beer either.

well:
as Confucius
once

"a little wine makes
wise men of us all"

Shouldn't the lime juice be by proportion also? Otherwise, how does one follow the recipe?

Shouldn't the lime juice be by proportion also? How does one follow the recipe otherwise?

You're the first to question proportion or ingredient since I began blogging on cocktails.

In my experience, limes are much more uniform in size and density than lemons. They're typically 3 inches long x 2 3/8 " wide. They have much less juice than lemons. I've never seen a recipe which measure out lime juice, in, say tea- or tablespoons, though they will frequently use a measure equivalent to the alcohol measure--a part or "gill"--the typical measuring cup employed in cocktail mixing. These measuring cups come in different sizes, so I prefer simply to use "parts". In my experience, a single lime will yield something like a tablespoon and a half of pure juice, though often less.

In mixing the first of the two recipes here, I assumed a portion less than a part, so I could have said 1/2 or 1/4 part.

Lime juice is a potent flavor, so you have to use it sparingly.

Thanks for visiting. I've posted about 25 cocktail mixes so far.

I've checked out your blog for a while, and I've even mixed up some of your drinks. I'd definitely welcome a book compiling them.

Of course you've ordered drinks at bars and taverns before. So you know of course that many barmen or -women aren't particularly "accurate" in their portions. They just pour what they think is "the right amount" in. With practice, I suppose this becomes possible, but I'm never completely convinced that they're getting their ratios correct.

Mixing drinks isn't a science. Proper combinations may vary somewhat and still hold the basic flavor. How much light vermouth actually makes the correct martini? I've seen them made by just "rinsing" the glass beforehand with vermouth, and I've seen them mixed about two to one vermouth. That's a very big difference, in my opinion.

The mixes I publish are based on a double portion, since I and my wife habitually take them together in the late afternoon. This is why I always say "by proportion" since the measures are about twice what you'd need for a single drink.

If you think referring to "juice of 1 lime" is too vague, you could substitute "1 tablespoon"--keeping in mind that not all limes have the same amount of acid (just like lemons). I.e., not all fruit is the same. Which of course is an argument for, or against, exact proportions, depending on how you see it. The cocktail glass is half full, or half empty.