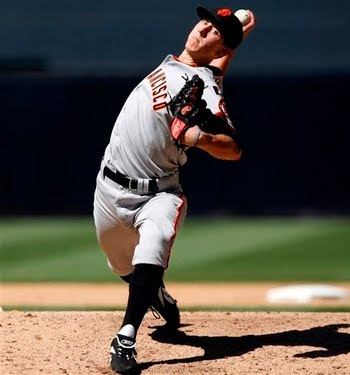 Sometimes you wish you could be wrong. Your intelligence says one thing, while your heart tries to pull away, refusing to acknowledge the obvious. It's painful to witness failure, especially when you suspected, secretly, that failure was a very real possibility.
Watching Tim Lincecum pitch early in his big league career, I always had the distinct feeling of fragility.
When my son Randy was a pitcher in the local little league, I used to have that same feeling. Randy was a juvenile diabetic, who had to be given two injections of insulin a day, and his metabolism was subject to wide mood-swings, sudden crushing fluctuations in energy and focus. He was a fine little pitcher, but it was always a nail-biting affair, watching him in tight situations.
Lincecum has always seemed to be that same kind of player. He seemed too young, almost child-like, and physically small, delicate, vulnerable. It wasn't clear how he could generate so much arm-speed, and seeing him stretch out, flailing his arms around and catapulting the ball, or "whipping" it towards the plate at 98 mph, was breathtaking. It seemed a very improbable phenomenon. Opposing batters frequently shook their heads, leaving the batter's-box after striking out, as if they couldn't believe what had just happened. It defied common sense.
Like all magical things, a small pitcher who lives on speed and challenge, is a kind of contradiction, liable, at any moment, to fall apart. A finely tuned machine, but delicate, and subject to failure at any time.
Back in September of 2011 [Season Wrap-Up--Giants Drop out of Contention] I posited the idea that the real ace of the Giants pitching staff, the man with the biggest future, was not Lincecum, but Madison Bumgarner. In that speculative piece, I said:
"It's been obvious to students of the game that Tim Lincecum's mechanics constitute a recipe for physical problems. The windmill motion, and the stress on his slight frame. Traditionally, smaller pitchers who rely on a fastball to conquer opposing batters, usually have short careers. The most famous example is Sandy Koufax, whose Hall of Fame career ended at age 30. Generally speaking, successful long careers aren't built on flame-throwing. Exceptions, of course, are well-known--Nolan Ryan, Roger Clemens, Randy Johnson, Bob Gibson--but they're as often as not taller men, with efficient, economical wind-ups. Long careers usually are characterized by great control combined with an easy motion (which puts minimal stress on the arm)--Warren Spahn comes to mind (5243.2 career innings pitched!). Up through age 42, Spahn averaged over 25 complete games a year; Lincecum has only thrown 8 in his whole career. So the tendency is to see Lincecum as a short-career star, whose best years may well be already behind him.
"In terms of wins, there is no question that on almost any other team in the league, Lincecum would have had at least 2, maybe 3 twenty-win seasons by now. His run support has been historically low, and he's routinely opposed by the other squad's ace starter. But there have been disturbing signs. His velocity has decreased steadily. He rarely throws a fastball over 92 mph these days, and hitters are beginning to figure him out in early innings. In 2008 and 2009, Lincecum seemed capable of a no-hitter on any given day, and frequently would go for 5 or more innings before anyone broke through. His strike-out to walk ratio is declining, and despite having added what has been referred to as a "deadly" change-up, he has a great deal more trouble finishing batters off after two strikes. What does the future hold for Timmy?
"Bumgarner, on the other hand, displays the kind of stuff, and mental concentration, normally seen only in veterans. He has an easy sweeping delivery, using all of his 6'5" height (the way Randy Johnson could). He seems not to tire in late innings, and his potential, assuming no unforeseen occurrence, looks to be unlimited. If Lincecum could be washed up at 34, Bumgarner might pitch for 20 more years."
Way back in May 2009, I commented on Lincecum's fragility [Tim Lincecum - Fragile Phenom ?], and wondered about his longevity, given the delicate balance of his physical skills and build:

"Tim Lincecum's star has risen as fast as any major league prospect in recent memory. Acquired by the San Francisco Giants in the first round of the 2006 Amateur Draft, after having been drafted twice before by major league teams (before he was ready to become professional)-- from the start, his potential and promise has signified greatness all the way.

I always thought Pedro Martinez looked frail on the mound, even when he was blazing away at 95+ and dominating games. While he had a great career, his velocity DID drop substantially as it progressed. It did so much earlier than some other power pitchers. Lincecum could still have some great seasons.