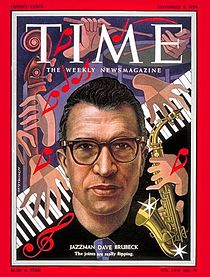 "He was a warm human being, and the music wears that temperature and affection with all the confirmation of a best friend's handshake."

That's a lovely sentence/tribute, Curtis. Enough to make me order my own Brubeck CD.

here is an article that leads towards THE essence of Dave Brubeck: