I was reading recently on another blog about a poet's frustration with the use of "abstraction" in modern and post-modern art, as he argued that all "abstraction" was in effect a kind of obfuscation or diversion from the useful relationship between medium and representation--that non-syntactic writing, for instance, was devoid of useful or definite meaning, or that abstract painting didn't tell one anything about "reality" since it "represented" nothing real, except the physical fact of its materiality. 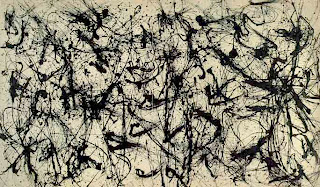 In a way, I don't disagree with this on a purely factual basis. All abstract art is subjective and suasive (or argumentative). Abstract writing or art can mean what we want it to mean, or what we say it means, or can mean.

Abstract art has conquered our culture. Almost no one seriously questions the value of the Abstract Expressionists, for instance; their work has entered the accepted canon of Western cultural history. Jackson Pollock [1912-1956] will now forever be compared and contrasted to Winslow Homer, and Raphael, and Neal Welliver. This is because he was recognized, and commended, and welcomed into the official art culture.

Experimental writing hasn't fared as well. Stein and Pound and Ashbery and Mac Low aren't considered to be necessary parts of the literary culture, in the same way that Pollock and de Kooning and Sam Francis and Robert Motherwell and Mark Rothko and Philip Guston are. If they were, their original printed works would be "priceless"--worth many times what they presently command on the rare book market. The big blockbuster names on the list of collectible modern authors--Fitzgerald's Gatsby, Hemingway's The Sun Also Rises, Hammett's The Maltese Falcon, Eliot's Waste Land, to name a handful--are far and away more in demand than the rival "abstract" literary masters. There seems to be some "resistance" in the culture to abstraction in language, that has been erased or at least made more translucent, for artistic artifacts.

I think this is partly due to the fact that we're "closer" to language than we are to art. Few people have as intimate a mental attachment to artificial visual stimuli, for instance, as they do to language. Language is an intimate mental function, and what we're read (or read to ourselves) as children has a much more dominating influence on our way of thinking about it, than we do about painting. In other words, if you've never sampled the abstract writing of Gertrude Stein, and come to it for the first time as a young adult, you will probably resist it. On the other hand, if you see Jackson Pollock's Number 32 for the first time, after having seen mostly representational art in your life, you may be delighted by its implications. This may be because you don't know "how it's done" and so have a discrete separation from the logic of its production--there's a potential "respectful distance" between yourself and the pretension of its presence. And since we think we know about how writing is "done"--the putting together of words and phrases into recognized, accepted syntactic called sentences--we may tend to discredit language which "breaks the rules" we've come to be taught--if only by example--make it "correct." Or maybe we just don't think of language as "art" in the same way we think the plastic arts are "artistic." We aren't willing to accept abstraction in language to the same degree that we accept it in "art."

I'm speaking generically here--as the voice of the man on the street. I was seduced into abstraction in language long before I came to be very familiar with American Abstract Expressionism. Not that I hadn't seen the paintings, but I had read literary works which challenged my sense of meaning and structure--Joyce's Ulysses, Eliot's The Waste Land, Cummings's poems--before I ever thought seriously about the meaning of a work like Pollock's Blue Poles. Which is partly explained by the inherent "passivity" of "looking at" or regarding art. When you read language, you are running a kind of projector in your mind--reading is a process and a task. But when you stand in a gallery and "look at" a work on the wall, you aren't "doing anything"--you're just apart from it: It's there and you're here, and you're not following the artist's brush strokes or his movements or the fine feathery detail-work involved in its making.

Except that, with Pollock, the making of it literally seems to be a part of our apprehension of the work itself. A work like Number 32 functions as the literal evidence of the physical act of its making, in a way that most representational art doesn't. That record seems to be a primary part of its meaning, of its purpose. When you see the black streaks and blotches and splashes of black paint, you can see them as the result of the throwing or dripping or smearing action of the painter as he put them on the canvas. There's no particular reason why this should be important to the value of a work of art, except perhaps as a demonstration of its vigorous energetic presence. It's busy, it's frenetic, it's confused, it's liberated, it has a quality of wild intensity--none of which has any inherent value except that which we give to it, through our response and judgment. We can call it art, for want of a better description.

And yet most people, people who would recognize a Pollock canvas as a certifiably acceptable "work of art" would almost certainly reject a piece by Gertrude Stein as belonging in the same canon of value and meaning as Henry James novel, or a poem by Robert Frost--even though Pollock doesn't "follow the rules" of representation, in much the same way that Stein doesn't "follow the rules" of syntax and grammar and narrative sequence. The more we know about artists who seriously pursue abstraction, the more we realize how carefully they have thought about what they do. Stein wrote probably as much about "how" she wrote as any modern writer, though a lot of her self-critical meditation (or moderation) exists within the "creative" works themselves, rather than as "external" critical expository prose.

A contemporary abstract literary document has to overcome the same hurdles that Stein did, say, when she published Tender Buttons in 1914. There is nearly as much resistance to a work of prose or poetry that isn't "narrational" and grammatically correct today, as there was then. And yet the general public may visit an exhibition of contemporary abstract art this weekend, and be no more challenged by the meaningless smears of color on a canvas stretcher, than they would about graffiti on a factory wall.

Literature has failed, in other words, to convince the reading public of the value of verbal abstraction as a worthy enterprise. And that resistance--if indeed that process can be described as a campaign or a calling or a purpose--seems as frustratingly stubborn to alteration today, as it did 50 or 75 years ago. It's probably the consequence of the critical community never really "buying" the idea of abstract language, to the degree that it did abstraction in art. Abstract Expressionism "won over" its audience 50 years ago, and never looked back. But abstraction in language still exists apart from its potential public(s), rejected, ignored, spurned. Is it because the works themselves have not been as strong and convincing--as undeniable--as they needed to be? Or is it simply that we're not "allowed" to like them, having been told by a disapproving critical garde that literary abstraction is unworthy of our attention? Are the sort of critical battles that were fought in the 1950's over Abstract Expressionism, to be waged or joined at some point in the future over the value of abstraction in literary works? Are we so intimately involved in language that we may never be able sufficiently to objectify a work of abstract literary composition to the same degree that we can of a painting or a sculpture or a photograph?

Is the work of Jackson Mac Low or Clark Coolidge or Ron Silliman awaiting the triumph of acceptance that once elevated the Abstract Expressionists to fame and fortune? Or will they be confined to the outer orbits of the literary solar system, cold and remote and under-appreciated and critically impoverished?
Posted by Curtis Faville at 4:51 AM

well now... how to define things so that they can be sold in The Market Place ? or "understood" or have some
recognizable/expected/prescribed "meaning" ....
Brings tears to my eyes (all three of them) to see Sam Francis mentioned.... should have realized, also, Milton Resnick and (maybe, though I don't/didn't know him)
Ad Reinhardt)
easy now to just google these guys, however....
THEY WERE REAL people.

an image of this "goddess" goes with my poem, here:


the painting is
what
the paint does

to know
gives into the
it is not so

easy to let go
of the so of it's
pre disposition


that is any
other
test nor meant to

but what is done did I say
or mean or do what besides
more is than that a lot of things?