Jacques-Louis David's famous familiar portrait of Jean-Paul Marat, which bears resemblance in style to depictions of Christ, for instance, is now regarded as a canonical "Pieta" of the French Revolution. The incident inspired a popular play by the German playwright Peter Weiss, The Persecution and Assassination of Jean-Paul Marat as Performed by the Inmates of the Asylum of Charenton Under the Direction of the Marquis de Sade. 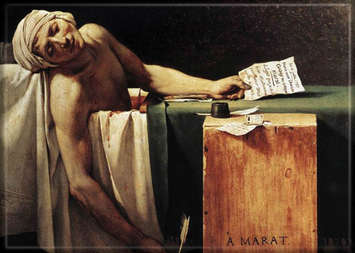 David's painting is in turn reminiscent of works such as Caravaggio's Entombment of Christ, with a similar attitude of mortal sag, with the right arm hanging down. 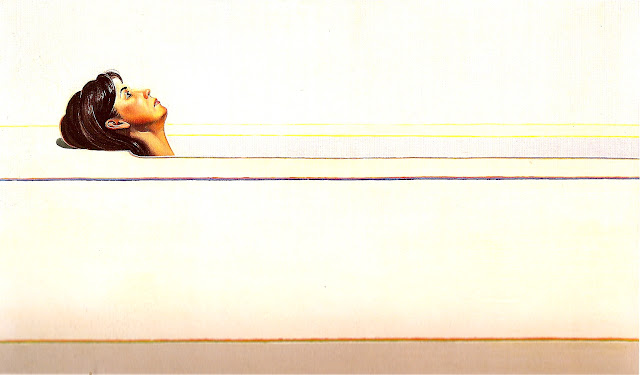 Woman in Tub [1965]. It seemed obvious to me, when I saw this work, that Thibaud was perfectly happy to have us make these kinds of connections to earlier paintings from the traditional canon. His depiction is meant to echo back and back to earlier images of people in this situation, so we can't dismiss entirely any gratuitous reference. Thibaud was an art instructor for decades, and knew its history intimately. Every Thibaud painting, whatever else it is doing, is also commenting on history, and the history of how art has been done, has been made.

This composition is consistent with the style and approach characteristic of Thibaud's work from the 1960's. There's a clarity, a lack of context, before which the subject seems to float in a sort of timeless void, without boundaries. The line of the edge of the tub, as well as the other line of the inner edge of the tub rim, extend infinitely to the right--though of course we assume that this is indeed a bath, and not some other kind of container. As with Thibaud's other portraits, the attitude of the subject seems superficially at ease. This is a woman taking a tub bath, relaxing, head tilted back, looking at the ceiling or wall or window above her. There's no indication that she's in any distress, which makes this candidness feel, well, candid. And yet everything else about the painting is unsettling. The tub is a kind of body container, like a cot, or a coffin. The woman, we presume, is nude, though we aren't allowed to confirm that. Though she seems alert, there's no sense of animation: she could literally be dead, with her blank eyes open. At the least, there's a slight sense of invasion--if not to put her at any risk, then at least of her privacy. She's rather vulnerable.

It might be more natural to suppose that she's simply somewhat distracted, just meditating for a few moments. Maybe she likes to think in the tub, as some people do. A bath is a sensual indulgence, after all, not simply a way of cleansing the body.

Modern Art has tended to see people or things separated from the contexts of history, or to de-emphasize their connections to historical event. Painters who do this, in the 20th Century, are the exception, rather than the rule. Think of Grant Wood. Or Paul Cadmus. Since about 1900, paintings which tell a story, or illustrate something from history (in a straight, un-ironic way), are rather uncommon. That's partly a function of the non-representational nature of contemporary art, but also a symptom of the alienation or disengagement of humankind, a characteristic of the distress of the social, political and cultural unrest of our age.

Thibaud's paintings never offer an easy answer to any question you might ask about them. There are always many more questions than answers, and the answers are seldom fully convincing. The woman's head, for instance, is like a "stop" against the continuous inertia of the horizontal linear space established by the brown lines which define the tub. She could almost be riding in a car, except that the whiteness of the space, and its length, deny that possibility. Her attitude almost seems to be a submission to some fate, the course of her life. She's "propelled" in a sense, by the level inertia of her position. She's passing through time, moving from left to right, towards some unanticipated consequence, some appointment with destiny. Ultimately, she's going to end up, in this position, at some undetermined date in the future. Though she seems unconcerned about that, she knows that she must submit to the inevitabilities of the life to come. Or she must change its course.

Could she be coming to some determination about her life choices? Or is she thinking about a nice dress she has been wanting to buy at a local department store? Or is she thinking of cheating on her husband? Or going to the Post Office later? We don't know. And it doesn't matter that we don't. She's just floating there in her tepid bath-water, thinking silently to herself, with no other information to give us. She doesn't yield up any pat messages, isn't making any point. She's Everywoman, caught in the moment, in the matrix of connections and relationships that govern her existence. We can't help her, we don't even know if she needs help. We might like to get to know her better, but she's unavailable just now. We'll have to make up our own story about her, put her in it. She won't know, or care. After all, she's just a painting, not a real person.

The longer we look at her, the cooler her bath water becomes. The painting is like a kind of delay in time. We watch, and wait, and wonder, much as the woman does. What will happen next? We don't know. We can only surmise. That sense of our having to supply a meaning is somehow unfair--why can't the artist be more specific, give us more clues to the meaning? In what way are we, as viewers of this picture, like the woman? We're just looking into space. Someone painting a picture of us, against the blank wall of a picture-gallery, might reveal us in this same kind of indeterminate gaze of mystery.

People often say the the Mona Lisa is mysterious because we don't know what she's thinking. In much the same way, we look at this Woman in Tub, and try to connect her to some vector, or spool of narrative that makes her more real, more explicit, more connected. Thibaud's genius is to pose all these questions, without supplying a definite explanation.
Posted by Curtis Faville at 1:58 PM